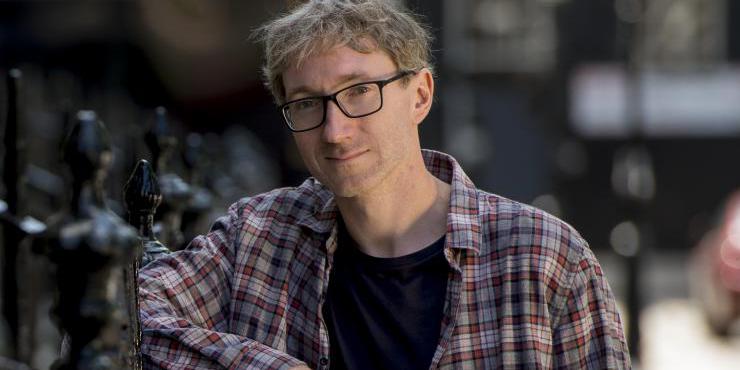 Stuart Turton is the bestselling author of The Seven Deaths of Evelyn Hardcastle (2018) and more recently The Devil and the Dark Water which was published in October 2020 by Raven Books. Stuart's books are available through Suffolk Libraries.

I’ve known I wanted to write since I was eight-years old reading Agatha Christie novels. I loved everything about those books. They felt like boardgames to me, as though Christie where carefully arranging the pieces before us. And they always felt fair. I knew if I paid enough attention I could solve them, which I loved. When I finished all of her books, I was utterly bereft.

I couldn’t believe there would never be any more. In my kid brain, I just thought, well, what if I write them, then there’ll be more. That’s where it started for me. As for my heroes, that’s not really my jam. I think idolising somebody is setting them up for failure, especially authors. I’ll say that I owe my career to Christie and Conan Doyle, and I think Raymond Chandler, Arundhati Roy, and Peter Carey have all written perfect books.

I loved winning that award so much! Every year, I read the Costa shortlist. That tradition has been a part of my life for as long as I can remember, but I never imagined I’d win one of the categories. Not in a million years.

Pressure’s not really external for me. I know what I want to do with each book and I kill myself trying to do it, but I try not to worry what people will think about it. If I did that, I’d just freeze. By winning the Costa, I was given a bit of leeway to keep writing strange, complex, mystery novels. It’s been a huge gift.

Nope, it was possibly worse, though for completely different reasons. My daughter was born a month after I started work on Devil. I foolishly tried to keep working during that first year of her life, and I just couldn’t manage it. I was trying to write this intricate novel with lots of historical detail and characters, while only sleeping two hours a night. I was writing like a zombie every day, just bashing words out, but none of them connected to each other. It was such a mess.

After the first year – when my daughter went to childcare and I finally started getting some sleep – I ended up throwing away 180k words and starting again. It was pretty plain sailing after that, but it was a long road reaching that point.

It’s a Sherlock Holmes-style mystery on a boat being stalked by the devil. It’s set in 1634, aboard a merchant vessel departing Jakarta for Amsterdam on an eight-month voyage. No sooner has it set sail than creepy things start happening, all suggesting a demon is onboard. Thankfully the world’s greatest detective is onboard.

Unfortunately, he’s a prisoner and can’t help. It’s left to his Watson-style sidekick to tackle the mystery in his stead with the help of a determined noble woman who has her own secrets.

I’m terrified of it. The idea at the centre of it is really out there, and it’s going to be difficult to pull off, but that’s the way I felt about Seven Deaths and Devil, so hopefully it’s a good sign.

Probably A Gentleman in Moscow, which is a boring answer because everybody’s read it, but I had such a good time with that book. Every page had something on it that made me smile. And that setting was so wonderfully realised.

I like your shoes. Are they new? They suit you.

A dolphin tried to kill me on a dive once. True story. My dive buddy had to distract it, and when I emerged I was covered in massive bruises and could barely walk. And that’s not even my worse diving accident.

The best thing is that you’re a published author, which is the BEST job. You get to tell stories for a living and watch all these people interact with them in really interesting ways. My readers have created art based on my stories. They’ve written poems, and fanfic. They dress in cosplay, and make games. Watching your stories fire other people’s creativity is extraordinary.

The worst part are the deadlines. Writing’s much more fun when you’re not obliged to do it for six hours every day. That’s a very small complaint though.

Borrow The Devil and the Dark Water