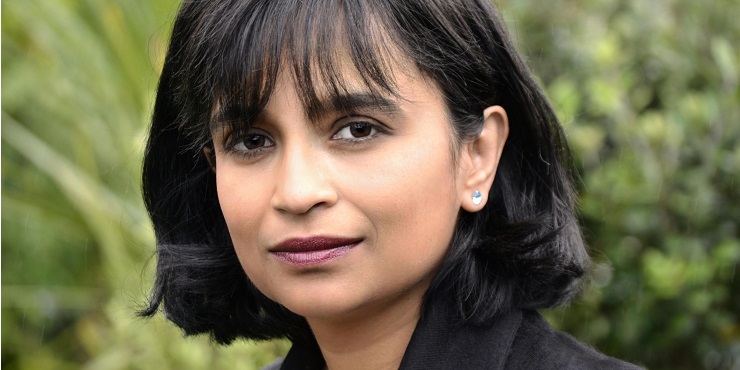 Nalini Singh is the author of international best-selling paranormal romance novels. Her work includes the Psy-Changeling series and the Guild Hunter novels. Nalini's latest book Quiet in her bones was published in the UK on 25th Feb by Gollancz. You can find Nalini's books on our catalogue.

Two of the first authors I remember following avidly are the late Anne McCaffrey, and Mercedes Lackey. I loved the extraordinary worlds they built and wanted to follow the lives of the people who lived in them. I was a teen by then, and had devoured countless books – and was already writing stories, trying to figure my way to a book. I can’t remember exactly when I decided writing was something I wanted to pursue, but I know I was very young. (I have a memory of trying to compose a story all the way back in primary school.)

I remember feeling frustrated by a number of books I’d read at the time where I felt the immortals in the story acted too human. I felt that if a person had lived a thousand years, they’d be far more inhuman. My brain took that thought and ran with it, and I ended up with Elena and Raphael and the Guild Hunter world.

I’m an instinctive writer in general, so I just sat down and began writing, and the characters showed me the way. I do, however, know where I’m heading with the series, as that’s important to know to hold a series together.

Think back and ask yourself if you’ve ever enjoyed a book or a movie that’s set even slightly outside our world. If you have, then give paranormal romance a go – for me, at heart, paranormal is about building worlds based on “what if” questions.

What if telepaths existed? What if their powers drove the telepaths insane? What would they do to survive? Those questions led to the genesis of my Psy-Changeling series. Not so very far removed from our own world, if you think about it. It’s all about the power of the human brain, and the possibilities and consequences tied to it.

Further, I’d add that paranormal romance is a very wide umbrella, so try more than one to see which authors resonate with you. I write a lot of mysteries inside my paranormal worlds, and I explore not only the bonds of love, but also the bonds of friendship, and of family.

Other writers may focus more on adventure elements, a quest of some kind perhaps, have a lot more or a lot less heat on the page. It’s such a massive subgenre that I really believe there’s something for everyone in there.

A library assistant, yes! I worked in the Auckland Libraries for some time and absolutely loved it. It also broke me out of any literary rut that I was in—so many wonderful books came through the library that I was constantly picking up random reads, and falling in love with them. I highly recommend everyone jump out of their literary comfort zone now and then. You might be surprised at what you discover.

Quiet in Her Bones is a straight thriller (no romantic elements). I’ve heard it described as a domestic thriller, as it’s based in a small and wealthy cul-de-sac where the neighbours all know each other and have plenty of secrets.

It begins with the discovery of the remains of Nina Rai, who vanished ten years ago, along with a quarter of a million dollars. Everyone wrote it off as a trophy wife who decided she was sick of her husband and wanted a new life. But now it’s apparent that Nina never left the cul-de-sac. She died the night she vanished.

Her son Aarav, now an adult, is determined to find out what happened to his mother—but nothing about Nina’s death is what it seems.

This is a dark mystery, and it delves deeply into people’s secret lives, those parts that we hide from the outside world. There’s a ton of emotion in it, because for all her faults, Aarav loved his mother, and he is obsessed with getting her justice. But obsession, of course, can be deadly…

I’m currently working on the next book in my Guild Hunter series. I can’t tell you much about it, as it’s early on in the process, and I prefer not to discuss a book until it’s taken solid shape. But I will say that it will be a powerful and emotionally intense book. I’m really enjoying being with these characters.

Every so often, I go back and look at various shelved projects. Some were rejected by publishers, some I never submitted, and some are only half done. I think for the majority, they were written when I was a very different writer, so if I went back, I’d have to take the seed of the idea, and basically start anew. A number of those seeds do still draw me back time and again, so you never know.

I read so much that I’m really terrible at choosing only one book ever for any list!! So I’ll give you a few great new-to-me discoveries that I made last year:

For TV, I’ll have to go with The Queen’s Gambit, and for music, I came a bit late to the party, but I really enjoy Calum Scott’s rendition of “Dancing on My Own”.

I feel like we’ve all been under this continuous ever-present stress even when we’re focusing on other things like work or entertainment, so it’ll be nice to just let it go and exhale!

I have about a hundred indoor plants. I don’t know the exact number! Many of the more recent ones are small seedlings or cuttings, as I really enjoy helping them grow, but I do also have a bunch that have been with me for many years. I adore them all. I find being around plants very calming – I’m smiling now, as I sit here in my office surrounded by green!