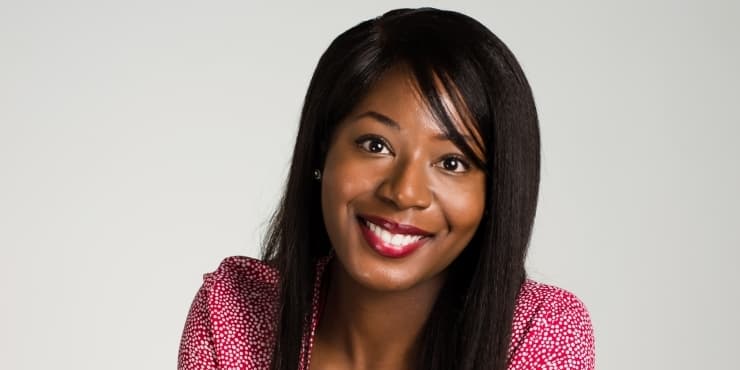 Lizzie Damilola Blackburn is a British-Nigerian writer, born in Peckham, who wants to tell the stories that she and her friends have longed for but never seen - romcoms 'where Cinderella is Black and no-one bats an eyelid'. In 2019 she won the Literary Consultancy Pen Factor Writing Competition with the early draft of Yinka, Where is your Huzband?, which she had been writing alongside juggling her job at Carers UK. Yinka, Where is Your Huzband? is published by Viking on 31st March and you can also find it on our catalogue.

Growing up, my heroes were children authors Jacqueline Wilson and Malorie Blackman. I loved how they weren’t afraid to write about real-life issues such as divorce, racism and alcoholism. Reading their books helped me prepare for the real world. They also inspired me to turn my hand to writing. I made my first attempt at writing a novel when I was ten. Sadly, I saved my manuscript on a floppy disk which I later broke!

A rom-com set in Peckham, Yinka, Where is Your Huzband? follows Yinka, a thirty-something British Nigerian woman who is constantly being asked the question in the title by her traditional mum and her many, many aunts. When her cousin suddenly gets engaged, Yinka sets up a very detailed plan (spreadsheets and all!) to find a date in time for her cousin’s wedding. However, what starts off as a simple goal turns into something quite drastic because Yinka feels as though she has to change who she is in order to find a man, not knowing that the thing she really needs to find is herself? Yinka, Where is Your Huzband? an unconventional love story – friendship, family and mental wellbeing all play a key role – and it’s the perfect read for those who love rom-coms and those who don’t!

The idea to turn Yinka into a novel was sparked by Jackie Ley, a fellow author. I met her at a blogging workshop and I shared my blog with her because I wanted some feedback on my short stories. In addition to giving me some helpful, constructive advice, she said, “I love Yinka! I think you should turn her story into a novel.” So, I did... however, I took on the challenge blindly. I had no idea how to write a book, and as a result, I spent the first year and a half writing a number of unfinished drafts. It wasn’t until I read Story Engineering by Larry Brooks that I realised that storytelling is a craft and requires various components such as structure, themes, stakes, etc. for it to be engaging.

From that point forward, I began to invest in myself as a writer – I attended writing workshops, took a couple of online courses, etc. – and not only did my writing improve, but Yinka’s story evolved too. Believe it or not, there were more storylines in the early drafts of Yinka (which is funny because there’s quite a number already!). It was a bit like a soap opera where everyone had their own drama going on, including one of Yinka’s aunts who was secretly struggling in her marriage. My agent did not hesitate to tell me to cut that storyline!

Nigerian culture is so rich and colourful – from the food to the clothes and so on. Family is big deal too. The beautiful thing about Nigerian culture is that you don’t have to have experienced it in order to “get it.” There’s so much that is relatable and cross-cultural.

It has definitely exceeded my expectations. I never expected Viking (my publisher) to love Yinka so much that they would make it their lead book of 2022! Nor did I think that Yinka would be read and loved by so many people all over the world, including Malala! This is why every day when I wake up, I thank God for this blessing. I always want to be in a state of gratitude and in awe that I’m living my dreams.

Sadly not. It’s too early. The manuscript is ever-changing, so whatever I share now could potentially be irrelevant in a few months’ time! I am writing a second book, though – so watch this space.

This is Us is one of the best TV shows to have graced our television screens in a long time. It ticks a lot of boxes: fantastic characters, engaging storylines, brilliant comedic elements, and it makes you cry. A lot. Even the music used to accompany various scenes are great. I definitely recommend writers to give the show a watch because the writing is incredible and the story juggles various timelines.

This is a tough question. I would say ‘Don’t be too hard on yourself.’ Various people throughout my life have told me this – so it must have been something that I needed to hear! These days, I’m better at being kind to myself. I don’t beat myself up as much as I used to, and when I do, I tend to bounce back much quicker and stronger.

I absolutely love mint chocolate chip ice-cream! Give me a spoon and twenty minutes and I’ll finish the entire tub!