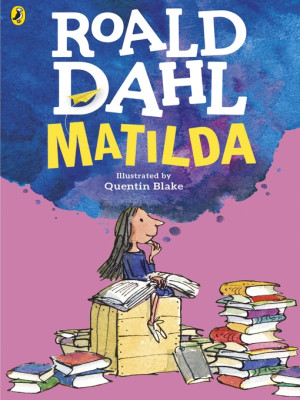 Rafaella finds it hard to make friends when she starts at a new school. Her name sounds strange, her ears stick out, she feels different from the others. And Lucy is the first to tease, the first to call her Earwig. But then a secret friendship begins.

Rose wishes Zack wasn't always teasing her at school. Then her Uncle Vinnie conjures up a magic way of stopping him. Ratty, the classroom pet might look like just a cute rat to Rose, but, as bully-boy Zack finds out, there's more to this little furry rodent than meets the eye.

There's a Boy in the Girls' Bathroom by Louis Sachar

Bradley Chalkers is a bad lot! He lies, he gets into fights, no one wants to be his friend and he is all alone. Until, that is, he meets the delightful new school counsellor, Carla, and she persuades Bradley that he can change.

Borrow There's a Boy in the Girls' Bathroom →

This title is also available on OverDrive.

The song from somewhere else by R.F. Harrold, Levi Pinfold

Frank doesn't know how to feel when Nick Underbridge rescues her from bullies one afternoon. No one likes Nick. He's big, he's weird and he smells - or so everyone in Frank's class thinks. And yet, there's something nice about Nick's house. There's strange music playing there, and it feels light and good and makes Frank feel happy for the first time in forever. But there's more to Nick, and to his house, than meets the eye, and soon Frank realises she isn't the only one keeping secrets. Or the only one who needs help.

Borrow The song from somewhere else →

Matilda's parents have called her some terrible things. The truth is, she's a genius and they're the stupid ones. Find out how she gets the better of them and her spiteful headmistress, as well as discovering that she has a very special power.

This title is also available on OverDrive.

Freak the Mighty by Rodman Philbrick

It's easy to bully someone, especially when they're weak and different, and everyone else joins in the game. That's why they all call Linda 'Blubber', including Jill. Jill can't stop joining in, even though she can see how much Linda is hurting.

David and his best friend Michael were tagged with awful nicknames way back in preschool when everyone did silly things. Fast-forward to seventh grade: 'Pottymouth' and 'Stoopid' are still stuck with the names - and everyone in school, including the teachers and their principal, believe the labels are true. So how do they go about changing everyone's minds? By turning their misery into megastardom on TV, of course! And this important story delivers more than just laughs - it shows that the worst bullying doesn't have to be physical, and that things will get better.