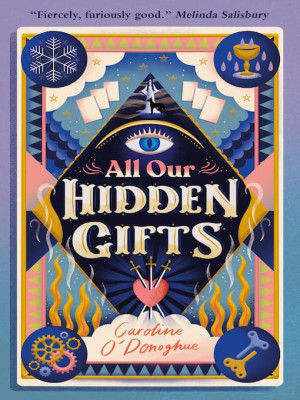 Ellen was just trying to help a stranger. That was how it started: giving a few minutes respite to a flustered young mother sitting opposite her on the train. A few minutes holding her baby while the mother makes an urgent call. The weight of the child in her arms making Ellen's heart ache for what she can never have.

The train pulls into a station and Ellen is stunned to see the mother hurrying away down the platform, without looking back. Leaving her baby behind. Ellen is about to raise the alarm when she discovers a note in the baby's bag, three desperate lines scrawled hastily on a piece of paper:

All murder mysteries follow a simple set of rules.

In the 1930s, Grant McAllister, a mathematics professor turned author, worked them out, hiding their secrets in a book of crime stories. Then Grant disappeared.

Thirty years later, ambitious editor Julia Hart arrives on a secluded island. She intends to republish these mysteries and she’s finally tracked Grant down. But there’s something curious about his seven murderous tales. The stories’ secrets seem to offer clues to a real crime – a mystery that’s remained unsolved for 30 years.

Julia’s come looking for answers. But now she’s locked in a battle of wits with a dangerously clever adversary who wrote the book on murder.

All our hidden gifts, by Caroline O'Donoghue

Maeve's strangely astute tarot readings make her the talk of the school, until a classmate draws a chilling and unfamiliar card—and then disappears. After Maeve finds a pack of tarot cards while cleaning out a closet during her in-school suspension, she quickly becomes the most sought-after diviner at St. Bernadette's Catholic school.

But when Maeve's ex-best friend, Lily, draws an unsettling card called The Housekeeper that Maeve has never seen before, the session devolves into a heated argument that ends with Maeve wishing aloud that Lily would disappear. When Lily isn't at school the next Monday, Maeve learns her ex-friend has vanished without a trace. Shunned by her classmates and struggling to preserve a fledgling romance with Lily's gender-fluid sibling, Roe, Maeve must dig deep into her connection with the cards to search for clues the police cannot find—even if they lead to the terrifying Housekeeper herself.

Borrow All our hidden gifts →

An imitation of darkness, by Simon McCleave

London 1998. A murdered, young actress. A predatory American film producer. DC Ruth Hunter and her partner, DC Lucy Henry, find themselves embroiled in the dark and sleazy side of the entertainment business, where it's more than looks that kill. Ruth and Lucy are called to the brutal killing of young actress and it seems that her murder might be connected to a cover up of serious sexual misconduct in London's film industry. However, when the investigation is thwarted at every turn, they begin to wonder if they will ever solve the case.

When a lucky break turns their attention to a man suspected of stalking the actress, Ruth and Lucy think they now have the prime suspect in their sights. With the clock ticking, will they be able to collect enough evidence to charge the man before he escapes abroad?

Borrow An imitation of darkness →

How to be a rock star, by Shaun Ryder

As lead singer of Happy Mondays and Black Grape, Shaun Ryder was the Keith Richards and Mick Jagger of his generation. A true rebel, who formed and led not one but two seminal bands, he's had number-one albums, headlined Glastonbury, toured the world numerous times, taken every drug under the sun, been through rehab - and come out the other side as a national treasure. Now, for the first time, Shaun lifts the lid on the real inside story of how to be a rock star. With insights from three decades touring the world, which took him from Salford to San Francisco, from playing working men's clubs to headlining Glastonbury and playing in front of the biggest festival crowd the world has ever seen, in Brazil, in the middle of thunderstorm.

From recording your first demo tape to having a number-one album, Shaun gives a fly-on-the-wall look at the rock 'n' roll lifestyle - warts and all: how to be a rock star - and also how not to be a rock star. From numerous Top of the Pops appearances to being banned from live TV, from being a figurehead of the acid-house scene to hanging out backstage with the Rolling Stones, Shaun has seen it all. In this book he pulls the curtain back on the debauchery of the tour bus, ridiculous riders, run-ins with record companies, drug dealers and the mafia, and how he forged the most remarkable comeback of all time.

Borrow How to be a rock star →