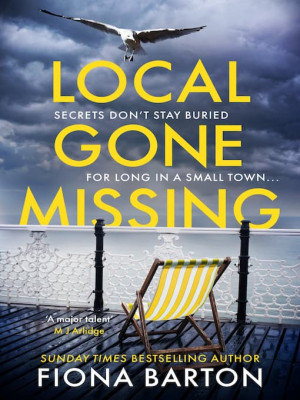 Looking for a new read? Take a look at our latest fiction titles for June 2022.

The botanist, by M.W. Craven

Detective Sergeant Washington Poe can count on one hand the number of friends he has. And he'd still have his thumb left. There's the insanely brilliant, guilelessly innocent civilian analyst, Tilly Bradshaw of course. He's known his beleaguered boss, Detective Inspector Stephanie Flynn for years as he has his nearest neighbour, full-time shepherd/part-time dog sitter, Victoria. And then there's Estelle Doyle. It's true the caustic pathologist has never walked down the sunny side of the street but this time has she gone too far? Shot twice in the head, her father's murder appears to be an open and shut case. Estelle has firearms discharge residue on her hands, and, in a house surrounded by fresh snow, hers are the only footprints going in.

Read our recent Meet the Author interview with M.W. Craven.

Murder before evensong: a Canon Clement mystery, by Richard Coles

Canon Daniel Clement is Rector of Champton. He has been there for eight years, arriving at the invitation of the patron and landowner, Bernard, Baron de Floures, of Champton House. Daniel's previous post was curate at a smart central London parish, where he got to know the de Floures family through his brother Theo, an up-and-coming actor and socialite. Audrey Clement, his widowed mother, lives with him at the Rectory on the estate. He has two dachshunds, Cosmo and Hilda. The story begins with Daniel announcing from the pulpit a plan to install a lavatory in church. This is long overdue, he thinks and so does Bernard de Floures, but the announcement goes down badly with the parish. Firm opposition comes from Mrs Harper and Mrs Dollinger of the Flower Guild, who are habitual opposers of change. There is opposition too from others who do not like the the thought of matters lavatorial in church.

The murder book, by Mark Billingham

Hunting the woman responsible for a series of grisly murders, Thorne has no way of knowing that he will be plunged into a nightmare from which he may never wake. A nightmare that has a name. Finally, Thorne's past has caught up with him and a ruinous secret is about to be revealed. If he wants to save himself and his friends, he must do the unthinkable.

The girl on the 88 bus, by Freya Sampson

When Libby Nicholls arrives in London, broken-hearted and with her life in tatters, the first person she meets on the bus is elderly pensioner Frank. He tells her about the time in 1962 he met a girl on the number 88 bus with beautiful red hair just like her own. They made plans for a date at the National Gallery, but Frank lost the ticket with her number written on it. For the past sixty years, he's ridden the same bus trying to find her. Libby is inspired by the story and, with the help of an unlikely companion, she makes it her mission to help Frank's search.

Prom night, Longbill Beach, 1982. Emily Vaughn dresses carefully for what's supposed to be the highlight of any high school career. But Emily has a secret. And by the end of the night, because of that secret, she will be dead. Nearly forty years later, Andrea Oliver, newly qualified as a US Marshal, receives her first assignment: to go to Longbill Beach to protect a judge receiving death threats. But Andrea's real focus isn't the judge - it's Emily Vaughn. Ever since she first heard Emily's name a year ago, she's been haunted by her brutal death. Nobody was ever convicted - her friends closed ranks, her family shut themselves off in their grief, the town moved on - so the killer is still out there. But now Andrea has a chance to find out what really happened.

London 1921. Very much not a land fit for heroes. Frenchie knows his occasional work for MI5 serves only the ruling classes. But he needs to feed his children. Scruples died in the trenches. When Ramsey Macdonald, Britain's first Labour Prime Minister, is blackmailed by a former lover, Frenchie must go to Paris to buy her silence. It is clear there are many people who would see Macdonald fall - the Conservatives, their friends in the press, even some of his own colleagues. But his own secret service? When Frenchie hears the other side of the story, everything changes. 'The Prime Minister's Affair' is another brilliant historical thriller from the author of 'Witchfinder', based on a real blackmail plot, hidden in the archives.

To kill a troubadour, by Martin Walker

It is summer in St Denis and Bruno is busy organising the annual village concert. He's hired a local Périgord folk group, Les Troubadours, to perform their latest hit 'A Song for Catalonia'. But when the song unexpectedly goes viral, the Spanish government, clamping down on the Catalonian bid for independence, bans Les Troubadours from performing it. The timing couldn't be worse, and Bruno finds himself under yet more pressure when a specialist sniper's bullet is found in a wrecked car near Bergerac. The car was reportedly stolen on the Spanish frontier and the Spanish government sends warning that a group of nationalist extremists may be planning an assassination in France. Bruno immediately suspects that Les Troubadours and their audience might be in danger. Bruno must organise security and ensure that his beloved town and its people are safe - the stakes are high.

Borrow To kill a troubadour →

The companion, by Lesley Thomson

DI Toni Kemp, of Sussex police, must unravel a case which has shocked the county to its core. What she discovers will lead her to Blacklock House, a grand country mansion, long ago converted into flats. Here in the middle of nowhere, where statues dot the lawn and peacocks scream in the bushes, seven long-term residents have seen more than they should. But this is a community who are good at keeping secrets...

Lesley will be giving a talk at Southwold Library on Saturday 18 June as part of this year's Slaughter in Southwold crime-writing festival.

Elise King never expected to live somewhere like Ebbing. Her career as a successful, ambitious detective meant everything to her. But then illness left her unsure if she'd ever return to work and in need of some rest and recuperation. So, here she is. At first glance, Ebbing seems a small, sleepy seaside town. But Elise soon realises that tensions are running high - the weekenders in their fancy clothes, renovating old bungalows into luxury homes, and the locals resentful of the changes. A town, divided. And while Elise watches and wonders what's really going on behind closed doors, Dee Eastwood, her cleaner, often knows. She's an invisible presence in many of the houses in town but she sees and hears everything. Tensions in the town reach boiling point when two teenagers end up in hospital and a local man vanishes without trace.

Behind anonymous screens, an army of cool and beautiful girls manage the dating service Ghost Lover, a forwarding system for text messages that promises to spare you the anguish of trying to stay composed while communicating with your crush. At a star-studded political fundraiser in a Los Angeles mansion, a trio of women compete to win the heart of the slick guest of honor. On a quest to lose her virginity, a daughter tracks down her deceased mother's old flame, the rugged, comically named Jon Deere. In these twelve riveting stories, Lisa Taddeo brings to life the fever of obsession, the blindness of love, and the mania of grief.

The half life of Valery K, by Natasha Pulley

How can you save a city that doesn't exist? In 1963, in a Siberian gulag, former nuclear specialist Valery Kolkhanov has mastered what it takes to survive: the right connections to the guards for access to food and cigarettes, the right pair of warm boots to avoid frostbite, and the right attitude toward the small pleasures of life. But on one ordinary day, all that changes: Valery's university mentor steps in and sweeps Valery from the frozen prison camp to a mysterious unnamed town hidden within a forest so damaged it looks like the trees have rusted from within. Here, Valery is Dr. Kolkhanov once more, and he's expected to serve out his prison term studying the effect of radiation on local animals. But as Valery begins his work, he is struck by the questions his research raises: what, exactly, is being hidden from the thousands who live in the town?

Borrow The half life of Valery K →

The other guest, by Helen Cooper

One year ago, Leah's feisty twenty-one-year-old niece, Amy, mysteriously drowned near her family-owned luxury resort on the shores of Lake Garda. Now, Leah is returning to Italy for the first time since Amy's death. But what she finds upon her arrival shocks her: her sister, brother-in-law, and surviving niece, Olivia, seem to have erased all memories of Amy, and insist her death was an accidental drowning, despite murky circumstances. Meanwhile, in Derby, university counsellor Joanna is recovering from a surprising break-up when she is swept off her feet by a handsome bartender. But when she invites him into her home, Joanna quickly starts to realise that she doesn't know him as well as she thought.

Borrow The other guest →

The apartment upstairs, by Lesley Kara

Scarlett's aunt lived - and was brutally murdered - in the flat upstairs. But Scarlett is determined that life should return to some kind of normal, even if that means living with just a ceiling between her and the scene of such a devastating crime. After all, this is her home. She's safe here. Isn't she? Dee is busy balancing her job as a funeral director with organising an event to mark the disappearance of her best friend, ten years ago. So she's got enough on her plate without worrying about the threatening messages that are appearing on her company's Facebook page. When Scarlett approaches Dee about planning her aunt's funeral, an unexpected link between them emerges. Together, the two women could uncover secrets that have long been buried. Even while someone wants to stop them digging. It's only ever that girl until it's someone you know.

Cat and mouse, by M.J. Arlidge

A silent killer stalks the city, targeting those home alone at night - killing without pity or remorse. As panic spreads, D.I. Helen Grace leads the investigation, but is herself a hunted woman, her every step dogged by a ruthless killer bent on revenge. As she tracks the murderer, Grace begins to suspect there is a truly shocking home truth that connects these brutal crimes.

We publish new recommendations every month. Browse our featured titles.