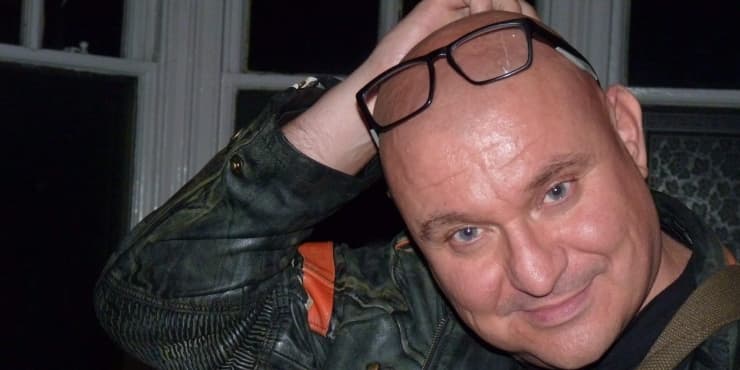 M.W. (Mike) Craven is the author of the Washington Poe crime series and the DI Avison Fluke series. In 2019 his novel The Puppet Show won the Crime Writers' Association Gold Dagger Award. Since then his books have been regular bestsellers.

In his latest venture, Mike has written one of The Reading Agency's Quick Reads titles. The Cutting Season was released on 14 April and is available from all Suffolk libraries.

His most recent novel, The Botanist, will be published in June 2022 and is available to reserve on our catalogue.

I grew up reading a wide and varied bunch of authors. My favourite book was Watership Down by Richard Adams, The Hobbit and The Lord of the Rings by Tolkein, and all the 87th Precinct novels by Ed McBain. If we go back earlier, then I guess it will be Enid Blyton’s The Magic Faraway Tree (which I recently picked up on a Kindle 99p deal, and thoroughly enjoyed reliving my early childhood), The Famous Five and The Secret Seven. Stephen King was, and very much still is, a god to me, as is the late, great Sir Terry Pratchett.

I started writing when I was very young. Probably around the age of ten or eleven. In those days I was football mad, and I think every story was about football. I’m glad I didn’t keep my early efforts; I’ve just edited a novel I wrote in 2015 and that was bad enough. I can’t imagine what it would be like to edit myself from forty-plus years ago...

Being in the army for twelve years and probation for sixteen does tend to ground you for whatever you might have to face. However, I think being told in 2004 that I was going to die in a few weeks, really taught me to not take life too seriously (spoiler alert: I didn’t die). I went into hospital quite shy and came out six months later not caring so much what people thought of me. Caring too much what people think of you is one of the major causes of shyness, a sometimes-debilitating condition. So, when my recent success happened, I was able to enjoy it, not take it, or myself too seriously, and felt free to engage with my readers on Twitter and Instagram and Facebook etc.

I became a full-time writer when my wife was working nine-to-five, Monday-to-Friday, so we thought it fair that I should keep the same hours. That way we could keep our weekends free. Now she is working for our business full-time (she keeps the books, handles all the admin, deals with publicists and agents and foreign publishers etc, which frees me up for writing), I keep the same hours. I start around ten and finish around six, with a couple of hours for lunch. If I’m writing I tend to work in big blocks, if I’m editing I can dip in and out as I’m using the more logical part of the brain. Creating stuff from scratch takes my brain longer to warm up, I think. I have a home office where I write, and I don’t write anywhere else. I know some writers take their laptops everywhere and will write in coffee shops and on trains etc., but I’m not one of them. I need my desk and I need my music and coffee.

Between Born in a Burial Gown, my first novel, and Body Breaker, my second (both DI Avison Fluke), I signed with David Headley, an agent with DHH Literary Agency. He asked me to rewrite Body Breaker as the first in a new series as this would have been easier for him to sell. I thought about it over Christmas but called him in the new year to say I thought it would be easier, and quicker, for me to start a new series from scratch. He agreed but asked me to keep it in Cumbria, as he liked the regional aspect.

I quite liked characteristics of Fluke so retained some of them for Poe, but I couldn’t rewrite Fluke’s sidekick, Matt Towler, as the same character with a different name. Towler was an ex-paratrooper, incredibly rude and non-PC, violent, and basically a lot of fun. So when I developed Tilly, I decided to write her as the anti-Towler – someone sweet and innocent, but equally funny. At this point I didn’t have a name for Poe. When someone misheard me say Washington Post as Washington Poe, I knew I had the name to carry a series. But you can’t call a Cumbrian, Washington without an explanation.

When I worked out the name’s provenance, and it’s pretty awful, Poe became a lot darker than I had intended. I therefore had to rewrite Tilly so she was sweeter and naiver than planned, just to balance out their relationship.

I found 20,000 words a good length for me. The problem I’ve had in the past when writing short stories is that they’re too long. The big challenge was adapting my language to fit the Quick Reads style. No contractions so it’s ‘can not’ instead of ‘can’t’, ‘do not’ instead of ‘don’t’ and ‘it is’ rather than ‘it’s’. I was limited to words of more than two syllables per paragraph (unless they were recognisable words like cigarette or holiday), and that was a fun challenge.

Some of the words the literacy reader changed surprised me initially (she replaced ‘elderly’ with ‘old’, for example), but when I think back to my days in probation, and the low levels of literacy amongst our clients, it made complete sense. The Quick Reads books are aimed at adults who haven’t read a book in a long time, adults who have never read books, and those with low literacy levels. The Cutting Season, although a Poe and Tilly novella, will therefore read very differently to the novels.

The Botanist was FUN to write. Really fun. And that was intentional. The Mercy Chair, the next Poe novel after The Botanist (which I finished last year) I knew would be very dark, easily the most upsetting one I’ve written (it’s the only book I’ve written where I had to step away from it every now and then), so I wanted to let readers have a bit of levity. In The Botanist, Poe is more sarcastic than ever, Steph Flynn, back after her forced absence in Dead Ground, is ruder and grumpier than ever, Tilly is... well, Tilly, and Estelle Doyle I think is going to become a reader favourite.

Sort of. In fact, it’s done. I can’t really talk about it, but contracts have been signed and we’ll have news later in the year.

Guards! Guards! by Terry Pratchett is an astonishing book, and although not my favourite in the Guards series, that honour goes to Night Watch, it’s a great jumping off point to Pratchett’s Discworld. Even if you’re not a fantasy fan, I think readers will enjoy Pratchett, as he basically wrote satire.

And for music, I’m going to show my age and say everyone should listen to Inflammable Material by Stiff Little Fingers.

There have been a few. A year or so ago, when the pubs opened after the first lockdown, I was in my local being interviewed by a journalist. He asked me I was ever recognised. I said hardly ever. At that exact moment a group of readers came over to our table for selfies and autographs... he was sure I’d set it up, but I hadn’t. I find it funny when people get tongue-tied around me. A blogger at Capital Crime burst into tears when she was introduced to me. She looked at me, burst into tears then ran off. She came back to apologise, fumbled her words and ran off again. We eventually had a cup of tea together and we keep in touch.

I used to have a pet crocodile and I used to be a commercial snake breeder.