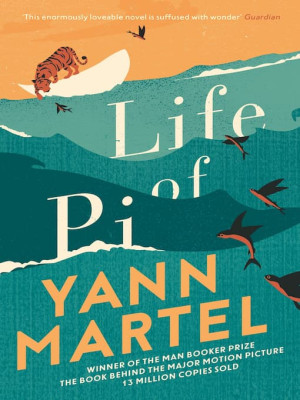 Life of Pi, by Yann Martel

One boy, one boat, one tiger.

British comedian, actor and broadcaster Sanjeev Bhaskar, OBE performs this brilliant edition of a work of fiction that is loved by fans around the world. After the tragic sinking of a cargo ship, a solitary lifeboat remains bobbing on the wild, blue Pacific. The only survivors from the wreck are a sixteen year-old boy named Pi, a hyena, a zebra (with a broken leg), a female orang-utan - and a 450-pound Royal Bengal tiger. The scene is set for an extraordinary adventure.

From separate catastrophes two rural families flee to the city and find themselves sharing a great, breathing, shuddering house called Cloudstreet, where they begin their lives again from scratch. For 20 years they roister and rankle, laugh and curse until the roof over their heads becomes a home for their hearts.

A word-of-mouth sensation when it was first published over 30 years ago, Tim Winton’s magical epic of love and acceptance is an Australian classic whose appeal endures undiminished.

What if it wasn't an accident? 1969. Eloise Shepherd, one of MI6's brightest rising stars, is working undercover in Soviet Russia as Magdalina Novikova. Her mission is to persuade nuclear physicist Stanislav Kalashnik to defect and bring his knowledge of Russian weapons back to the UK. On the verge of success, the operation fails suddenly and spectacularly. 17 years later, Kalashnik is Chief Engineer at the power plant near Pripyat known as Chernobyl. His concerns for the safety of the plant are growing. When his views lead to accusations that question his patriotism, he finds himself in a very risky position.

Meanwhile, back in London, Eloise Shepherd's life and career are spinning out of control when she's approached with a one-time offer to redeem herself. The mission: to get Kalashnik over Soviet borders once more. It's an opportunity that could change everything and Eloise knows there's no reward without risk. But she's heading straight towards a danger far greater than she could ever have anticipated.

It is 1941 and the devastating loss of life following the Japanese attack on Pearl Harbor leaves best friends Audrey and Lizzie distraught and bereft as they lose someone they both love deeply. As they come to terms with their grief, their resolve to play a worthwhile role towards the war effort is strengthened. As trained nurses they volunteer for the army medivac corps and are sent to England where they join a team who fly on dangerous missions to the Front to bring back wounded soldiers. Audrey, Lizzie and their fellow medics and pilots will suffer the tragedies of war and experience loss and suffering. They will come to understand the importance of friendship, respect, bravery and being true to yourself. But, once the war is over, can they learn one of the hardest lessons of all: the ability to love again?

Next in line, by Marion Toodd

Gaby Fox is known to many due to her successful TV career, so when her brother and his pals hire the salubrious Lamond Lodge for his birthday celebrations, it is noted by the St Andrews locals. A ripple of shock goes round the town when Russell Fox is gunned down on the premises. DI Clare Mackay is attending a wedding when she sees Gabrielle receive a phone call then flee. Soon after, Clare learns why when the news of the shooting reaches her. Instead of trying to enjoy the day – not easy when the groom is her ex-boyfriend – Clare is preoccupied.

Clare gets to work on uncovering the facts surrounding Russell Fox's death. The guests at the lodge have secrets to hide, but even when Clare begins to unravel the deceit, it doesn't bring the answers. The detective can't help but wonder why no one who knew Russell seems capable of telling the truth, and whether there is more than one person with a reason to want him dead...

Borrow Next in line →