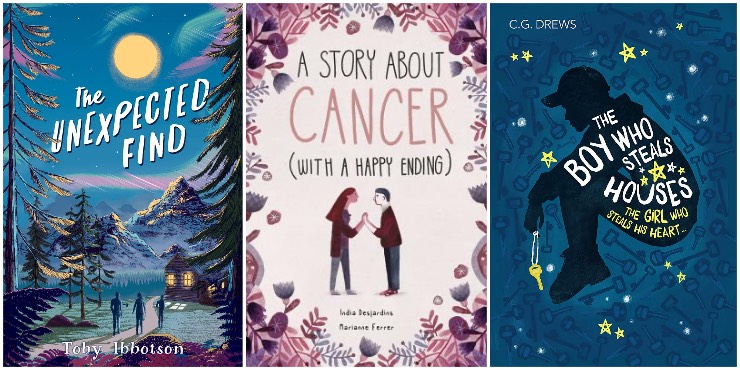 Ahead of Empathy Day (9 June 2019), EmpathyLab have put together a collection of YA books that promote empathy and understanding while also being cracking reads. Why not check out one of these brilliant titles?

Somebody Give This Heart a Pen, by Sophia Thakur

"Sophia Thakur began performing poetry at the age of sixteen, and is known for her strong narrative voice and emotional empathy. Her remarkable debut encourages young people to look outside of themselves and to explore their own hearts' journeys through poetry."

Can You See Me?, by Libby Scott & Rebecca Westcott

"People think that because Tally's autistic, she doesn't realise what they're thinking, but Tally sees and hears - and notices - all of it.

"Endearing, insightful and warmly uplifting, this is a story of autism, empathy and kindness that will touch readers of all ages."

"Bad things happen when you're around, Lex...

"That's what her stepfather tells her. That's what she believes about herself.

"But how can she convince herself and everyone around her that her anger doesn't make her a monster? If only she could stop losing her temper and behave herself, her step-father would accept her, her mum would love her like she used to and her step-brother would declare his crushing desire to spend the rest of his life with her. She wants these things so badly she determines to swallow her anger and make her family proud. But pushing fury down doesn’t make it disappear. Instead, it simmers below the surface waiting to erupt. There’ll be fireworks when it does."

"I'm Allison. I'm here because I've nowhere else to go."

"Allison is alone, Marla is alone. Soon they will come together.

"Allison has run away from home and takes refuge in a shed in a house she thinks is abandoned. Marla lives in that house and thinks Allison is a friend from her past called Toffee. What follows is an 'exploration of identity, mental health & friendship' and a realisation that "'We’re alone together.'"

"After Will's brother is shot in a gang crime, he knows the next steps. Don't cry. Don't snitch. Get revenge. So he gets in the lift with Shawn's gun, determined to follow The Rules.

"Only when the lift door opens, Buck walks in, Will's friend who died years ago. And Dani, who was shot years before that. As more people from his past arrive, Will has to ask himself if he really knows what he's doing."

"A boy comes to terms with his identity as a mixed-race gay teen - then at university he finds his wings as a drag artist, The Black Flamingo. Sometimes, we need to take charge, to stand up wearing pink feathers - to show ourselves to the world in bold colour.

"I masquerade in makeup and feathers and I am applauded."

The Boy Who Steals Houses, by C. G. Drews

"Sam is only fifteen but he and his autistic older brother, Avery, have been abandoned by every relative he's ever known. Now Sam's trying to build a new life for them. He survives by breaking into empty houses when their owners are away, until one day he's caught out when a family returns home.

"To his amazement this large, chaotic family takes him under their wing - each teenager assuming Sam is a friend of another sibling. Sam finds himself inextricably caught up in their life, and falling for the beautiful Moxie. But Sam has a secret, and his past is about to catch up with him."

"Charlie and Nick are at the same school, but they've never met - until one day when they're made to sit together. They quickly become friends, and soon Charlie is falling hard for Nick, even though he doesn't think he has a chance. But love works in surprising ways, and Nick is more interested in Charlie than either of them realised."

"Seventh grader Jordan Banks loves nothing more than drawing cartoons about his life. But instead of sending him to the art school of his dreams, his parents enrol him in a prestigious private school known for its academics, where Jordan is one of the few kids of colour in his entire grade.

"As he makes the daily trip from his Washington Heights apartment to the upscale Riverdale Academy Day School, Jordan soon finds himself torn between two worlds - and not really fitting into either one. Can Jordan learn to navigate his new school culture while keeping his neighbourhood friends and staying true to himself?"

The Deepest Breath, by Meg Grehan

"Stevie is eleven and loves reading and sea-creatures. She lives with her mum, and she's been best friends with Andrew since forever. Stevie's mum teases her that someday they'll get married, but Stevie knows that won't ever happen. There's a girl at school that she likes more. A lot more. Actually, she's a bit confused about how much she likes her. It's nothing like the way she likes Andrew. It makes her fizz inside. That's a new feeling, one she doesn't understand.

"Stevie needs to find out if girls can like girls - love them, even - but it's hard to get any information, and she's too shy to ask out loud about it. But maybe she can find an answer in a book. With the help of a librarian, Stevie finds stories of girls loving girls, and builds up her courage to share the truth with her mum."

"Fifteen-year-old Ilyas is under pressure from everyone: GCSE's are looming and his teachers just won't let up, his dad wants him to join the family business and his mates don't care about any of it. There's no space in Ilyas' life to just be a teenager.

"Serving detention one day, Ilyas finds a kindred spirit in Kelly Matthews, who is fed up with being pigeonholed as the good girl, and their friendship blows the social strata of high school wide open. But when Kelly catches the eye of one of the local bad boys, Imran, he decides to seduce her for a bet - and Ilyas is faced with losing the only person who understands him. Standing up to Imran puts Ilyas' family at risk, but it's time for him to be the superhero he draws in his comic-books, and go kick the moon."

"Barney and Norma are just trying to get by and keep their jobs, but working at Dead End also means battling demonic forces, vengeful ghosts, time travelling wizards and scariest of all - their love lives."

Frankly in Love, by David Yoon

"Frank Li is a high school senior living in Southern California. Frank's parents emigrated from Korea, and have pretty much one big rule for Frank - he must only date Korean girls. But he's got strong feelings for a girl in his class, Brit - and she's not Korean. His friend Joy Song is in the same boat and knows her parents will never accept her Chinese American boyfriend, so they make a pact: they'll pretend to date each other in order to gain their freedom.

"Frank thinks fake-dating is the perfect plan, but it leaves him wondering if he ever really understood love - or himself - at all."

A Story About Cancer (with a happy ending), by India Desjardins, Marianne Ferrer & Solange Ouellet (trans.)

"A teenage girl heads towards the hospital waiting room where the doctors are going to tell her how much time she's got to live. As she walks, she thinks about her journey up to this point. The terrible decor in the hospital, wearing a headscarf, the horrible treatments, but also being with her friends, family, and her new boyfriend Victor.

"This is a story about cancer with a happy ending. It's about life, love, and especially, hope."

The Unexpected Find, by Tony Ibbotson

"Simon is different, people don't really like that. Judy is difficult, and people don't like that either. So when they become friends, it's unexpected. And everything that comes next - the search for Judy's father, the journey to Sweden, the crash, the fight - I guess you could say that's unexpected too."

A Country to Call Home: an anthology on the experiences of young refugees and asylum seekers, by Lucy Popescu (ed.) & Chris Riddell

"An anthology of new writing on one of the defining issues of our time. Focusing on the fate of refugee children and young adults, it is aimed at children and adult readers alike, and features work from Michael Morpurgo, Eoin Colfer, Kit de Waal and Simon Armitage among many others."

Jemima Small Versus the Universe, by Tamsin Winter

"Jemima Small finds it hard to measure up. Especially because she's the very opposite of her name. And being forced to join a healthy eating group at school means no one will let her forget that. But if there's one big thing she has going for her it's her attitude - and she's determined to prove that Jemima Small is a Big Deal."