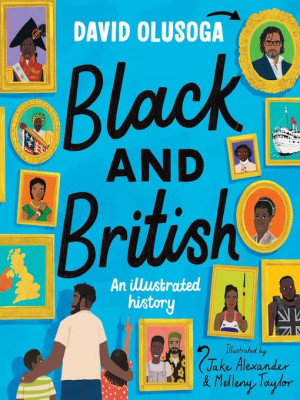 Mark Windrush Day on 22 June with these selected children's titles.

Granny came here on the Empire Windrush, by Patrice Lawrence and Camilla Sucre

One day, Ava is asked to dress as an inspirational figure for assembly at school, but who should she choose? Granny suggests famous familiar figures such as Winifred Atwell, Mary Seacole and Rosa Parks, and tells Ava all about their fascinating histories, but Ava's classmates have got there first - and she must choose someone else. But who? And then Ava finds a mysterious old suitcase and Granny begins to share her own history, and how she came to England on the Empire Windrush many years ago.

She tells her story through the precious items that accompanied her on the original voyage, each one evoking a memory of home, and as Ava listens to how Granny built a life for herself in England, determined to stay against the odds and despite overwhelming homesickness, she realises that there is a hero very close to home that she wants to celebrate - her very own brave and beloved granny.

We sang across the sea: the Empire Windrush and me, by Benjamin Zephaniah

The hopes, dreams, and bravery of the Windrush generation are expressed in this vivid story through the real-life experiences of Trinidadian musician, Mona Baptiste. Written as a poem by Benjamin Zephaniah, the book is illustrated by the extraordinary artist, Onyinye Iwu.

Borrow We sang across the sea →

Coming to England, by Floella Benjamin and Diane Ewen

A picture book edition of 'Coming to England', the inspiring true story of Dame Floella Benjamin: from Trinidad, to London as part of the Windrush generation, to the House of Lords. Follow ten-year-old Floella as she and her family set sail from the Caribbean to a new life in London. Alone on a huge ship for two weeks, then tumbled into a cold and unfriendly London, coming to England wasn't at all what Floella had expected. What will her new school be like? Will she meet the Queen?

Filled with optimism and joy, yet deeply personal and relevant, young children will resonate with Floella's experiences of moving home and making friends. Alongside vibrant illustrations by Diane Ewen, this powerful story shows little people how courage and determination can always overcome adversity.

With one last hug, a child says goodbye to his grandmother and the shores of his Caribbean home, before stepping into an adventure across the ocean, to an unknown horizon and a sky full of hope. With stunning, thoughtful lyricism, internationally renowned poet, John Agard, recalls the journey made by thousands of West Indian children and families who travelled to Britain as part of the Windrush Generation between 1948 and 1971.

The place for me: stories about the Windrush generation, by K.N. Chimbiri and Kevin George

Explore the lives of the Windrush generation in this full-colour anthology that presents 12 moving tales of sacrifice and bravery, inspired by first-hand accounts. Each inspiring story helps to bring the real experience of Black British people into focus.

Borrow The place for me →

The Windrush generation are named after one of the first ships that arrived in the UK from Jamaica in 1948. In this heart-stopping adventure based on real historical events, Benjamin Zephaniah shows us what it was like being a child of the Windrush generation, an important and intriguing time in Britain that's sure to fascinate young readers.

The story of the Windrush, by K.N. Chimbiri

In June 1948, hundreds of Caribbean men, women and children arrived in London on a ship called the HMT Empire Windrush. Although there were already Black people living in Britain at the time, this event marks the beginning of modern Black Britain. Combining historical fact with voices from the Windrush Generation, this book sensitively tells the inspiring story of the Windrush Generation pioneers for younger readers.

Borrow The story of the Windrush →

When did Africans first come to Britain? Who are the well-dressed black children in Georgian paintings? Why did the American Civil War disrupt the Industrial Revolution? These and many other questions are answered in this essential introduction to 1800 years of the Black British history: from the Roman Africans who guarded Hadrian's Wall right up to the present day.