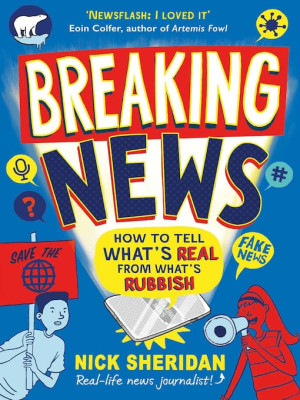 The news has shaped the world we live in for centuries. Today we carry it everywhere we go. As the news faces the existential threats of a post-truth, fake news world, the new Breaking The News exhibition from the British Library examines the vital role it plays in all our lives.

Find out more about the exhibition taking place in libraries.

Good news: why the world is not as bad as you think, by Rashmi Sirdeshpande

Pandemics, war, terror, natural disasters - the world seems to be full of bad news and it can all feel, well, a little bit scary. But this is just part of the story. There are in fact tons of great things happening, from robots improving health care and trees healing the planet, to everyday people helping their community with acts of kindness and the businesses fighting for good in the world.

In Good News, children will learn to become fake news detectives, sussing out what's real and what isn't. They'll discover the good news - the amazing anecdotes, case studies and figures around the globe that are making a difference. And they'll learn that if we all continue to work together, things can only keep getting better and better.

Empowering, reassuring and confidence-boosting, this book is a positive antidote for testing times.

Breaking news: how to tell what's real from what's rubbish, by Nick Sheridan and David O'Connell

It's never been easier to access the news; TV, radio, billboards, newspapers and endlessly buzzing on to the screens in our pockets. But with more and more news available, it's hard to know what to trust. Where do stories come from? What's real news and what's fake? And what role does social media play in all of this? Insightful, hands-on, essential and reassuring, 'Breaking News' will help children navigate the peaks and pitfalls of our modern day news cycle, through laugh-out-loud text and amusing illustration.

Fearless: the story of Daphne Caruana Galizia, by Gattaldo

What does it take to be an investigative journalist and discover the truth against all the odds? Daphne Caruana Galizia had a happy childhood with her family on the small island of Malta, loving books, stories and writing. When she succeeded in her ambition to become a journalist, she discovered that there was much to write about in her home country. She found that greedy and corrupt politicians were making themselves rich rather than working for the good of their people.

Fearlessly, Daphne exposed criminal and dishonest activities. Her enemies responded with threats and insults to discourage her from revealing more. But nothing could dissuade Daphne from fighting for what she believed in.

What is fake news? How can the news be wrong? How do we know if what we're reading is true or not? This book helps answer these questions and provides kids with the necessary knowledge to make up their own minds on fake news and the media as a whole.

The fog of war: Martha Gellhorn at the D-Day landings, by Michelle Jabes Corpora and Amerigo Pinelli

On a dark night at the height of World War Two, thousands of ships charge across the ocean towards the French coast. This is Operation Neptune: the beginning of the fight to free Europe from the Nazis. The next few weeks will turn the tide of the war.

On board one of the hospital ships, disguised as a nurse, is Martha Gellhorn. A seasoned war correspondent, she talked her way onboard, hiding in a lavatory until it was too late to send her back. Now Martha is on her way to make history as the only woman to set foot on the Normandy beaches on D-Day.

The inspiring true story of Martha Gellhorn's perilous, secret journey to become the only female journalist to cover the D-Day landings of 1944.

Borrow The fog of war →

The power of her pen: the story of groundbreaking journalist Ethel L. Payne, by Lesa Cline-Ransome and John Parra

Ethel Payne always had an ear for stories. Seeking truth, justice, and equality, Ethel followed stories from her school newspaper in Chicago to Japan during World War II. It even led her to the White House briefing room, where she broke barriers as the only black female journalist. Ethel wasn’t afraid to ask the tough questions of presidents, elected officials, or anyone else in charge, earning her the title, “First Lady of the Black Press.”

Fearless and determined, Ethel Payne shined a light on the darkest moments in history, and her ear for stories sought answers to the questions that mattered most in the fight for Civil Rights.

Borrow The power of her pen →

An interactive quiz book all about fake news - can you spot the truth from the lies? Trump may have been shouting all about 'FAKE NEWS' but it has been a phenomenon since way before he was born. Can you help sort the fact from the fiction through a series of true or false questions about everything from dinosaurs to presidents to weird science. Quiz your friends, your parents, your grandparents or even your teachers to see if you can discover the true stories behind some of the world's most enduring facts and weirdest hoaxes.