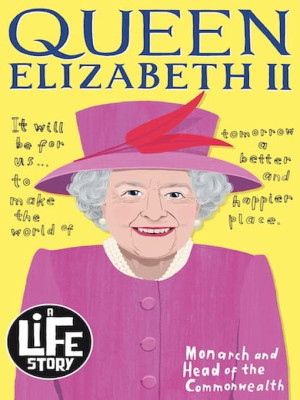 Celebrate the Queen's Platinum Jubilee with these royalty-themed children's books!

The royal party, by Adam and Roger Hargreaves

A quokka for the queen, by Huw Lewis-Jones and Fred Blunt

It's the Queen's birthday and the last gift to arrive has come all the way from Australia. They say good things come in small packages! Well this party is about to get wild - it's a Quokka for the the Queen! The Quokka quickly makes an impression and the Queen decides to do things differently - with the help of Quokka she decides she will give the presents. Soon they are creating an elaborate gift list for everyone they can think of.

Borrow A quokka for the queen →

The Queen's hat, by Steve Anthony

A sudden gust of wind sets off a marvellous London adventure for the Queen, the Queen's men and one very special hat. So let's follow one determined, daredevil queen through the zoo, over Tower Bridge and up Big Ben - just where will that hat land?

Katie in London, by James Mayhew

When Katie and her cousin Jack visit London with Grandma, they don't think there's much to see and do. At Trafalgar Square they meet a talking stone lion, and he takes them on a wonderful tour of the city.

The Queen's knickers, by Nicholas Allan

Everyone can see the Queen's smart coats and dresses, but what does she wear underneath, particularly for a school visit? Through the eyes of a little girl hoping for a school visit by the Queen, the range of royal underwear is revealed here.

Tea with the Queen, by Pip Jones and Ella K. Okstad

A day out with Squishy could never be boring! When Squishy and Ava go on a trip to London, they can't resist the chance to explore Buckingham Palace. But when they accidentally find the Queen, will she be able to see how wonderful Squishy is?

Borrow Tea with the Queen →

Claude at the palace, by Alex T. Smith

Claude and Sir Bobblysock just happen to wander accidentally into the royal palace on a very special day indeed - the Queen's birthday! Unfortunately the royal nanny, Nanny Stern-Bloomers, has had to take herself off for a lie-down and there's no one to make sure the royal children stay neat and tidy for the big party. But Claude and Sir Bobblysock could step in to babysit, couldn't they? After all, princes and princesses are always on their best behaviour.

Borrow Claude at the palace →

The cat and the king, by Nick Sharratt

The King and his very clever cat must find a new home after their castle burns down in an unfortunate incident with a dragon. They choose No. 37 Castle Close: an ordinary house in an ordinary street. It's very exciting learning to live a normal (if still quite royal) life. But danger looms when the pesky, fire-breathing dragon makes its return.

Borrow The cat and the king →

There once is a queen, by Michael Morpurgo and Michael Foreman

Beginning with the queen as a little girl, planting an oak tree with her father, There Once is a Queen follows her incredible story in a way that will bring this historic reign vividly to life for readers, big and small, around the globe. An exquisite gift book and commemoration of the Platinum Jubilee, it marks a unique moment in our shared history and will be a treasured keepsake for generations to come.

Borrow There once is a queen →

The royal rabbits, by Santa Montefiore and Kate Hindley

Anything in the world is possible - by will and by luck, with a moist carrot, a wet nose and a slice of mad courage. Shylo has always been the runt of the litter, the weakest and quietest of all of his family, his siblings spend their days making fun of him for not being like the rest of them. But when Shylo stumbles across a band of ratzis and overhears their evil plan to take a photo of the Queen in her nightie, it's up to this unlikely hero to travel to London and inform the Royal Rabbits of London about the diabolicial plot.

It's 1953, the year Elizabeth is to be crowned Queen of England. Elsie Kettle can't wait to go to London to see the celebrations on Coronation Day. Elsie lives with her Nan - her mum works as a showgirl, so she's not around very often. Spirited and imaginative, but often lonely, Elsie longs for a best friend. Luckily, she and Nan are very close; Elsie just wishes she was allowed a cat to keep her company sometimes.

Then tragedy strikes. Nan and Elsie both fall ill with tuberculosis, and Elsie finds herself whisked away to the children's ward of the hospital. Confined to bed for months on end, Elsie finds it very hard to adapt to the hospital's strict regime. But she invents astonishing ways of entertaining the other children on the ward, and for the first time finds herself surrounded by true friends.

Billie Templar desperately wants her dad to come home. He's a soldier and has been away for seven weeks, fighting for 'Queen and country' - but how can the two of them possibly defend their four-year record of winning the three-legged race at the school carnival if he's thousands of miles away?

Our Queen Elizabeth, by Kate Williams

A colourful, charming book by historian Kate Williams, taking young readers on an amazing journey through Queen Elizabeth II's seven decades on the throne. Along the way, they'll see her sparkling crown jewels and magnificent palaces, and meet her beloved corgis, horses, and of course, her very famous family.

Celebrating the Queen's Platinum Jubilee, the incredible history of HM Queen Elizabeth II's 70-year reign, told through the enthralling life stories of 25 amazing people who have called Britain home. The reign of HM Queen Elizabeth II has been long and eventful. Over the past 70 years, Great Britain has seen incredible changes in the ways we live, think and feel, shaped by the inspiring people who were born in Britain or arrived on its shores.

As we approach the Platinum Jubilee in June 2022, learn about the Queen's life and 25 other amazing history-makers - from modern pioneers, leaders and scientists to writers, athletes and activists - in this illustrated special edition paperback. Each page spread is devoted to a tale of an incredible Briton, told by talented writer and children's book critic Imogen Russell Williams and brought to life by Sara Mulvanny's vivid colour illustration.

Once, a very long time ago, there was a little Princess called Elizabeth who loved to play and have fun with her horses, dogs and little sister, Margaret. But when she was ten years old, her life changed forever. From growing up during the Second World War and training as an army mechanic, to celebrating VE day with the people of Britain and marrying Prince Phillip - the man she loved, this is the amazing true story of a little girl who became Queen Elizabeth II.

The Queen is one of the most famous women in the world. But what is she really like? This enthralling story of the life of Queen Elizabeth II is full of photographs and facts that capture the drama and grandeur of her reign as Britain's longest-serving monarch, from her childhood during the Second World War and her coronation up to the present day.

The Queen's wardrobe: the story of Queen Elizabeth II and her clothes, by Julia Golding

An entertaining and gorgeously illustrated book showcasing the clothes and jewellery of Queen Elizabeth II alongside fascinating stories from her life. The book includes a foreword by Michele Clapton, costume designer for Netflix's 'The Crown'.

Celebrating strong, brave women across the centuries and around the world, 'Queens' tells their stories of strength and resilience. Spanning 3000 years from Cleopatra to the Viking queens, Queen Nanny of Jamaica to HRH Elizabeth II, discover new stories about fierce female monarchs. Full to the brim with striking, vibrant illustrations and bursting with facts about the queens' pets, costume, homes, make-up, jewellery, and much more.

Queen Elizabeth II: steadfast, constant, dutiful. Read all about the life of Queen Elizabeth II, the United Kingdom's longest-reigning monarch. From her childhood years in London, to training as a mechanic in the Second World War and becoming queen at 25, learn lesser-known facts about this true icon.