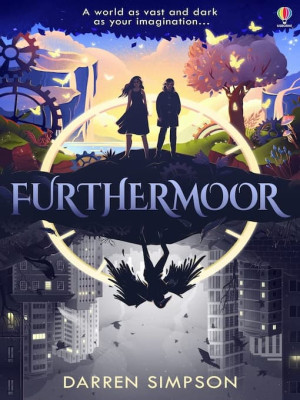 Looking for some new YA titles to read this March? Take a look at our top picks, from fantastical imaginary worlds to apocalyptic wars.

The real world is a hostile place for twelve-year-old Bren, his schooldays stalked by vicious bully, Shaun, and his family life fractured at home. Ever since his sister Evie died in an accident, Bren's only safe space is Furthermoor, an imagined world of mechanised trees and clockwork animals, where Evie is still alive.

In Furthermoor, no one can hurt Bren - until the mysterious Featherly arrives. Now Bren is forced to confront his deepest fears and decide if his place in the real world is worth fighting for. Enter a world as vast and dark as your imagination, in this unforgettable coming-of-age story about courage, friendship and finding your voice.

Until the end, by Derek Landy

The final part of the second Skulduggery Pleasant cycle is here!

The Faceless Ones have returned to our universe. The bad guys have won. With the end of everything just days away - and no longer able to rely on Valkyrie Cain - Skulduggery must make allies of enemies if he's going to stand any chance of saving what's left of the world. And just when things are looking their bleakest, they manage to get even worse, with Omen Darkly suddenly having to step up when his brother, the Chosen One, falls.

Borrow Until the end →

The taking of Jake Livingston, by Ryan Douglass

Sixteen-year-old Jake Livingston sees dead people everywhere. But he can't decide what's worse: being a medium forced to watch the dead play out their last moments on a loop or being at the mercy of racist teachers as one of the few Black students at St. Clair Prep. Both are a living nightmare he wishes he could wake up from. But things at St. Clair start looking up with the arrival of another Black student-the handsome Allister - and for the first time, romance is on the horizon for Jake. Unfortunately, life as a medium is getting worse.

Though most ghosts are harmless and Jake is always happy to help them move on to the next place, Sawyer Doon wants much more from Jake. In life, Sawyer was a troubled teen who shot and killed six kids at a local high school before taking his own life. Now he's a powerful, vengeful ghost and he has plans for Jake.

Borrow The taking of Jake Livingston →

Beasts of prey, by Ayana Gray

Magic doesn't exist in the broken city of Lkossa anymore, especially for girls like sixteen-year-old Koffi. Indentured to the notorious Night Zoo, she cares for its fearsome and mythical creatures to pay off her family's debts and secure their freedom. But when her loved ones' safety is threatened by the Zoo's cruel master, Koffi unleashes a power she doesn't fully understand.

As the son of a decorated hero, Ekon is all but destined to become an elite warrior. Until a fire at the Night Zoo upends his certain future and, on the brink of his final rite of passage, Ekon is cast out - his reputation left in tatters. For Koffi and Ekon, the outlook is bleak - unless they can capture the Shetani, the vicious monster that plagues their city, and recover their futures.

When our worlds collided, by Danielle Jawando

When fourteen-year-old Shaq is stabbed outside of a busy shopping centre in Manchester, three teenagers from very different walks of life are unexpectedly brought together. What follows flips their worlds upside down and makes Chantelle, Jackson and Marc question the deep-rooted prejudice and racism that exists within the police, the media and the rest of society.

From the author of And the stars were burning brightly.

Borrow When our worlds collided →

The ice dragon, by George R.R. Martin and Luis Royo

This is an enchanting tale of courage and sacrifice for young readers and adults by the wildly popular George R.R. Martin, author of 'A Song of Ice and Fire', the series that inspired HBO's Emmy Award-winning 'Game of Thrones'. Illustrations by acclaimed artist Luis Royo enrich this captivating and heartwarming story of a young girl and her dragon.