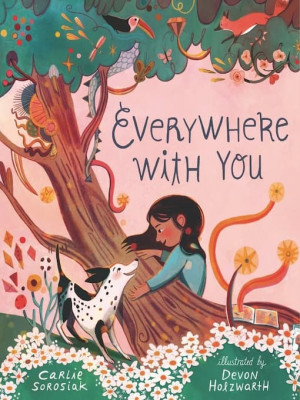 Looking for new books for your little ones? Take a look at our brand new children's fiction and non-fiction books for June 2022.

Dave and Greta make the world better!, by Matt Carr

Brrr!: a brrrilliantly funny story about dinosaurs, knitting and space, by Kes Gray and Nick East

Brrr! The Ice Age is coming, the temperatures are dropping and the dinosaurs are frrreezing. Only one thing will keep them warm - woolly jumpers! But dinosaurs can't knit, can they? Find out what REALLY happened to the dinosaurs in an out-of-this-world adventure, featuring dinosaurs, knitting and a trip to outer space.

Everywhere with you, by Carlie Sorosiak and Devon Holzwarth

Two houses stand side by side: one is home to a dog, the other to a young girl. Though a fence divides them, girl and dog build a sweet and sturdy friendship rooted in make-believe ... and are lonely no more. Paired with moving illustrations and based on a true story, this endearing tale testifies to the transformative power of creativity and inter-species friendship.

Borrow Everywhere with you →

Mrs Noah sang to the children when they woke in the morning. She sang as she worked in the garden, growing flowers and growing food. She sang lullabies at night to help the children sail into sleep 'If you want to learn to sing,' Mrs Noah tells the children, 'first you must learn how to listen. Close your eyes, tight shut, and open your ears, wide, wide.' At first the children hear only silence, then birds call, bees hum - and they hear the song of the garden.

Once upon a fairytale: a choose-your-own fairytale adventure, by Natalie O'Hara and Lauren O'Hara

From the inimitable O'Hara sisters, 'Once Upon a Fairytale' is story where the reader gets to decide on the adventure and the possibilities are endless. Did you ever wish to feast with fairies, live in a tree, or ride a unicorn across the sun-lit sky? Here, in this magical world, you can. You can choose to be a clever princess, or a curious gingerbread man, or perhaps a gentle knight.

Borrow Once upon a fairytale →

Deep, deep, deep under the sea ... lives Blobfish! Blobfish loves telling jokes, although he has no one to share them with, so he sets off on an adventure to find a friend. But sometimes friends turn up in the most unexpected places, even at the bottom of the ocean. This heartfelt and humorous story gently introduces children to themes of friendship, belonging and the issue of plastics in our oceans.

Under the ground, by Anna Milbourne and Simone Dimitri

Have you ever wondered what's under the ground? A fascinating world lies hidden there. In an exciting journey into the Earth, young children can lift flaps and peep into holes to find ants and bunnies, pipes and trains, fossils and even lava.

Borrow Under the ground →

The marvellous doctors for magical creatures, by Jodie Lancet-Grant and Lydia Corry

Whilst most unicorns like sunshine and sparkles, Glitterbug the unicorn enjoys moody skies and storms. Ava's doctor dads can't work out what is giving Glitterbug a tummy ache, so she decides to investigate. An inclusive picture book celebrating kindness, friendship and being true to yourself.

Rex is king of the dinosaurs: carnivores want to be him and herbivores want to be eaten by him. That is, until a pesky Ice Age comes along and he winds up frozen solid in a glacier. When he wakes up, 65 million years later, human beings rule the roost - and if they get their hands on Rex, he'll wind up in a zoo - or, worse: a MUSEUM. Lucky for him, Rex isn't the only undercover creature in town. He's whisked out of danger by the one and only Bigfoot, who has been surviving among the humans undetected for years.

Bigfoot and his friends show Rex how to get by in the humans' world, and soon there's only one thing left for him to do: GET A JOB. But that's easier said than done - and with a meddling nine-year-old neighbour to deal with, and the constant risk of discovery, life couldn't be harder for a dinosaur in disguise.

While the storm rages, by Phil Earle

September 1939. Britain is on the brink of war. As Noah Price's dad marches off to fight, he asks his son to honour one vital promise: that he will keep their dog, Winn, safe. No matter what. Noah agrees, but his best intentions are crushed when the government advises people to have their pets put to sleep as part of the war preparations. Children are heartbroken, queues outside vets' surgeries stretch for miles.

But Noah is a resourceful and impetuous child. He won't just do what he is told. Far from it. With his two friends in tow, he makes a pledge. To go on the run, and save as many animals as he can, whatever the cost. So begins the most thrilling of adventures, involving a stolen ark, a motley crew of animals and a crashed Spitfire. Can Noah possibly save the animals, and lead them all to the promised land?

Borrow While the storm rages →

There's absolutely nothing wrong with Minnie's island. Nothing, that is, apart from the earthquakes, which pull buildings and schools and houses down on a regular basis. Luckily, the island's inhabitants have found a way to fix their crumbling walls: giants. Giants look after human children, like eleven-year-old Minnie. When Minnie turns twelve, she'll kiss her giant, turning her into a stone statue forever. The stone will be used to repair buildings. And there's nothing wrong with that either - or so Minnie thinks.

But when a dreadful earthquake strikes, Minnie realises she's not quite ready to say goodbye to her giant - not forever - not yet. So Minnie goes on the run, betraying her parents and everyone she knows. The secrets she uncovers on her journey threaten to pull everything down: and so begins a desperate race against time.

Looking for Emily, by Fiona Longmuir

When twelve-year-old Lily moves to the sleepy seaside town of Edge, she's sure that nothing exciting is ever going to happen to her again. But when she stumbles upon a secret museum hidden in the middle of town, she realises that there might be more to her new home than meets the eye.

The underpants of chaos, by Sam Copeland and Jenny Pearson

Something bad is happening at Little Strangehaven Primary. What are the peculiar shivers that keep striking the school, bringing strangeness in their wake - from uncontrollable ballroom dancing to an attack by military chickens? Spy-detective Agatha Topps is determined to find out. She's the only person who doesn't forget the strangeness as soon as it's over. At least, until new boy Lenny Tuchus turns up and remembers too.

Their spy-detectoring leads them to the Book of Chaos, an ancient text which has been hidden away in the Room of Forbidden and Dangerous Books. Can Agatha and Lenny fight off attacks from evil underpants and Transylvanian gargoyles to stop the shivers before their town is sucked into oblivion? Because power lies in books - especially this one.

Borrow The underpants of chaos →

Escape to the river sea, by Emma Carroll

In 1946, Rosa Sweetman, a young Kindertransport girl, is longing for her family to claim her. The war in Europe is over and she is the only child left at Westwood, a rambling country estate in the north of England, where she'd taken refuge seven years earlier. The arrival of a friend of the family, Yara Fielding, starts an adventure that will take Rosa deep into the lush beauty of the Amazon rainforest in search of jaguars, ancient giant sloths and somewhere to belong. What she finds is Yara's lively, welcoming family on the banks of the river and, together, they face a danger greater than she could ever have imagined.

The follow-up to Journey to the river sea.

Borrow Escape to the river sea →

Onyeka and the academy of the sun, by Tola Okogwu

Black Panther meets Percy Jackson in this action-packed and empowering middle-grade superhero series about a British-Nigerian girl who learns that her Afro hair has psychokinetic powers.

Onyeka has a lot of hair – the kind that makes strangers stop in the street. She’s always felt insecure about her vibrant curls, until she makes an important discovery: she can control her hair with her mind!

Her mother quickly whisks her off to the Academy of the Sun, a school in Nigeria where Solari – children with superpowers – are trained. But Onyeka and her new friends at the Academy soon have to put their powers to the test as they find themselves caught up in an epic battle - one that puts the future of all Solari at risk.

Borrow Onyeka and the academy of the sun →

The bedtime book of animals: take a peek at more than 50 of your favourite animals

Turn each page to find out more about a wide variety of animals, from teeny-tiny insects to gigantic elephants and whales. With beautiful illustrations, storybook text, and key terms highlighted on each page, this book is a wonderful and comprehensive introduction to animals around the world, giving bite-sized chunks of accessible information to help early learners get to know new species.

Borrow The bedtime book of animals →

See inside the Solar System, by Rosie Dickins and Carman Saldaña

Blast off to explore our Solar System - from the fearsome heat of the Sun to the freezing distant planets, plus moons, asteroids and more. Discover how humans are planning to visit Mars, what you would weigh on Jupiter and what makes Venus so deadly.

Borrow See inside the Solar System →

Everything you know about minibeasts is wrong!, by Nick Crumpton and Gavin Scott

Do you know all there is to know about minibeasts? Bees die when they sting you, centipedes have 100 legs and cockroaches are indestructible, right? Well, this book is here to show you that you're WRONG! But don't worry, there are so many minibeasts out there it's impossible to know everything about all of them. So, let's uncover the truth! From incredible insect architects to eating spiders in your sleep, discover how everything you think you know about creepy-crawlies is actually untrue in this in-depth, ingenious book with debunks many common myths about all kinds of minibeasts.

Borrow Everything you know about minibeasts is wrong! →

Narwhal: the Arctic unicorn, by Justin Anderson and Jo Weaver

Discover the beautiful and fascinating unicorn of the sea, the narwhal, with words by a Planet Earth II producer and pictures by an award-winning artist. Learn about how narwhals have adapted to their freezing habitat, how they look after their young and all about their distinctive, mysterious tusks.

An illustrated book for children aged 6+ that explores the incredible myths behind the biggest questions about our planet - and the sensational science we know today.