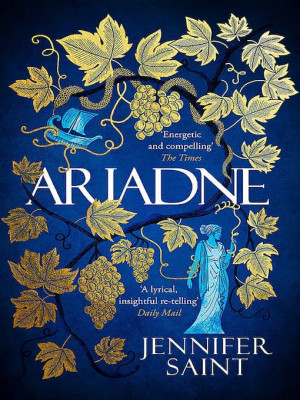 Take a look at some of our favourite books inspired by Greek mythology, telling the stories of famous women in myth and reframing the epic Trojan War through their eyes.

In the house of Helios, god of the sun and mightiest of the Titans, a daughter is born. But Circe has neither the look nor the voice of divinity, and is scorned and rejected by her kin. Increasingly isolated, she turns to mortals for companionship, leading her to discover a power forbidden to the gods: witchcraft.

When love drives Circe to cast a dark spell, wrathful Zeus banishes her to the remote island of Aiaia. There she learns to harness her occult craft, drawing strength from nature. But she will not always be alone; many are destined to pass through Circe's place of exile, entwining their fates with hers. The messenger god, Hermes. The craftsman, Daedalus. A ship bearing a golden fleece. And wily Odysseus, on his epic voyage home.

As Princesses of Crete and daughters of the fearsome King Minos, Ariadne and her sister Phaedra grow up hearing the hoofbeats and bellows of the Minotaur echo from the Labyrinth beneath the palace. The Minotaur - Minos's greatest shame and Ariadne's brother - demands blood every year. When Theseus, Prince of Athens, arrives in Crete as a sacrifice to the beast, Ariadne falls in love with him. But helping Theseus kill the monster means betraying her family and country, and Ariadne knows only too well that in a world ruled by mercurial gods - drawing their attention can cost you everything.

In a world where women are nothing more than the pawns of powerful men, will Ariadne's decision to betray Crete for Theseus ensure her happy ending? Or will she find herself sacrificed for her lover's ambition?

A Thousand Ships, by Natalie Haynes

In the middle of the night, Creusa wakes to find her beloved Troy engulfed in flames. Ten seemingly endless years of brutal conflict between the Greeks and the Trojans are over, and the Greeks are victorious. Over the next few hours, the only life she has ever known will turn to ash. The devastating consequences of the fall of Troy stretch from Mount Olympus to Mount Ida, from the citadel of Troy to the distant Greek islands, and across oceans and sky in between.

These are the stories of the women embroiled in that legendary war and its terrible aftermath, as well as the feud and the fatal decisions that started it all.

Daughters of Sparta, by Claire Heywood

For millennia, two women have been blamed for the fall of a mighty civilisation - but now it's time to hear their side of the story. As princesses of Sparta, Helen and Klytemnestra have known nothing but luxury and plenty.

With their high birth and unrivalled beauty, they are the envy of all of Greece. Such privilege comes at a high price, though, and their destinies are not theirs to command. While still only girls they are separated and married off to legendary foreign kings Agamemnon and Menelaos, never to meet again. Their duty is now to give birth to the heirs society demands and be the meek, submissive queens their men expect.

But when the weight of their husbands' neglect, cruelty and ambition becomes too heavy to bear, they must push against the constraints of their sex to carve new lives for themselves - and in doing so make waves that will ripple throughout the next three thousand years.

The Penelopiad, by Margaret Atwood

With wit and verve, drawing on the storytelling and poetic talent for which she herself is renowned, Atwood gives Penelope, wife of Odysseus and cousin of the beautiful Helen of Troy, new life and reality - and sets out to provide an answer to an ancient mystery.

When her city falls to the Greeks, Briseis's old life is shattered. She is transformed from queen to captive, from free woman to slave, awarded to the god-like warrior Achilles as a prize of war. And she's not alone. On the same day, and on many others in the course of a long and bitter war, innumerable women have been wrested from their homes and flung to the fighters. The Trojan War is known as a man's story: a quarrel between men over a woman, stolen from her home and spirited across the sea. But what of the other women in this story, silenced by history? What words did they speak when alone with each other, in the laundry, at the loom, when laying out the dead?

Borrow The Silence of the Girls →

London, 1799. Dora Blake is an aspiring jewellery artist who lives with her uncle in what used to be her parents' famed shop of antiquities. When a mysterious Greek vase is delivered, Dora is intrigued by her uncle's suspicious behaviour and enlists the help of Edward Lawrence, a young antiquarian scholar. Edward sees the ancient vase as key to unlocking his academic future. Dora sees it as a chance to restore the shop to its former glory, and to escape her nefarious uncle. But what Edward discovers about the vase has Dora questioning everything she has believed about her life, her family, and the world as she knows it. As Dora uncovers the truth she starts to realise that some mysteries are buried, and some doors are locked, for a reason.

Read our recent Meet the Author interview with Susan Stokes-Chapman.

A lifetime ago, Lore Perseous left behind the brutal, opulent world of the Agon families - ancient Greek bloodlines that participate in a merciless game every seven years. A game that is about to begin again. For centuries, Zeus has punished the gods with a game called the Agon, which turns them mortal for one week, and at the mercy of being hunted by those with godly ambitions. Only a handful of the original Greek gods remain, the rest replaced by the mortals who killed them and ascended.

After her family's sadistic murder by a rival bloodline, Lore escapes and vows to repay her parents' sacrifice by doing one thing - surviving. For years, she has pushed back dark thoughts of revenge against the man responsible for their murder, a man by the name of Wrath who has attained unimaginable power. Except for one week, every seven years. A week that is fast approaching.

Within the depths of the Underworld the formidable snake-haired Gorgon has finally had enough. Tired of being eternally and unjustly brandished a villain, Medusa has found the courage to face her tragic past and speak out. Determined to expose the centuries of lies surrounding her name, Medusa gives unparalleled insight into her cursed life, from her earliest memories and abandonment at birth, right through to her tragic and untimely death at the hands of the hero Perseus.

Through telling her story, Medusa finally reveals the lost truth behind antiquity's most infamous monster.