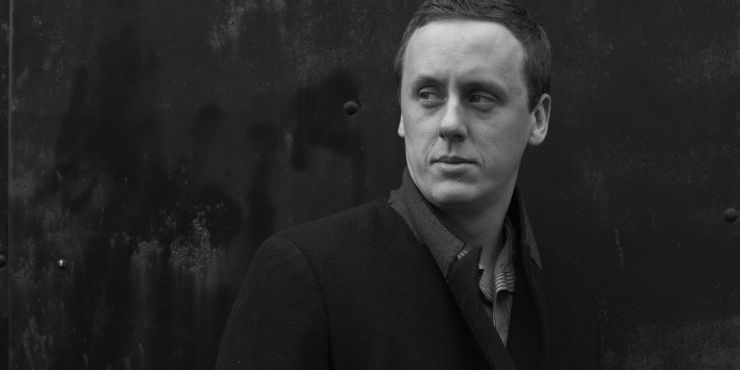 Tom Wood is the author of the Victor series of eight novels and two novellas, and the standalone thriller A Knock at the Door. The ninth Victor book, A Quiet Man, was published in May 2021 by Sphere. You can find Tom's books on the Suffolk Libraries catalogue.

I’m sad to say I didn’t really have any literary heroes when I was growing up. I can’t remember seeing a book in my house beyond an encyclopaedia or two. I was well into my teens before I even chose to read a novel on my own accord. We read books at school, of course, but almost exclusively they were the kind of dry literary works that have absolutely zero appeal to a teenage boy. I really hope things are different today than they were then.

No routine to speak of, though I do try and have a word count to hit. If not each day, each week. I almost never have consistency with this. I might aim for two thousand per day and write five thousand one day and five hundred the next. I could have one amazingly productive week and then be stuck for the following two weeks. I’m slowly learning to be more flexible with targets, knowing from painful experience they’re hard to stick to, and failing to do so is a significant source of stress and worry. The more relaxed I am, the more I’ll write and the better that writing will turn out. I write in a dedicated home office these days. Before the pandemic, I did much of my writing in coffee shops. Writing can be a lonely profession and too much time in only my own company is no good to anyone, so I liked to go out most days with my laptop.

Usually, my agent or editor is the first person to read the completed manuscript. At that point it’s in pretty poor shape because I’ve just finished it and almost certainly suffered a huge crisis of confidence at the eleventh hour. For later books, I’ve tried to get feedback from a few different people, and in the past I’ve had close friends and family take early peeks. However, it’s incredibly difficult to get honest feedback from anyone who cares about you. Before I was published, I thought I was the bee’s knees because no one was willing to tell me how much I sucked. I had to learn that the hard way, and it’s why I always tell aspiring writers to make it a priority to find people who will provide useful, critical feedback.

The entire cast of Goodfellas, for sure. Everyone in that film is an anti-hero or an outright villain. And yet most of them are incredibly likeable. You’re laughing along with them in one scene then gasping in horror in the next before laughing along with them once again soon afterwards. And talking of Robert DeNiro, his character in Heat, Neil McCauley, would be another influence. He could be thought of as the villain, but we spend so much time with him I see him as the protagonist of the film. He’s the one driving the story, really. There’s a lot of McCauley in Victor. They’re both ruthless, professional, extremely good at what they do, and have a humanity they suppress so they can do their jobs well. In Heat (spoiler alert) McCauley pays the ultimate price for allowing that humanity to come before his professionalism. Victor’s own has got him into trouble many times, but he hasn’t paid that same price… yet.

No, absolutely not. I almost wrote it, then titled The Killer, on a whim. I had been writing a different book for several years and couldn’t get it right. I spent so long working on it that I ended up hating it and wanted to write something else for fun. And then, it was only when I was nearing the end of writing The Killer that I realised I wanted to keep writing about Victor. By the time The Hunter was published, I had already written The Enemy, then titled The Contract, so I was certainly thinking about a series. But thinking ten years ahead? No way.

It’s a very different kind of Victor novel, which happened for a number of reasons. I had ended the previous series novel, Kill For Me, with the hint that Victor might be retiring because I wasn’t sure what the future held. I didn’t know if Victor would be back so I wrote the ending to Kill For Me as if he didn’t know either. By the time I knew I was going to write another in series, I wasn’t actually contracted to write one at that point, but I did it anyway.

So, because there had been a long gap between books, and because I was out of contract, there was no pressure to write it. That gave me a kind of freedom to experiment, to try and write a Victor story that was completely different from any other. A small scale, more personal adventure.

Victor’s always been an antihero and often acting for purely selfish reasons, so I wanted to trick him into being a hero in this new book. I wanted to find a way for him to inadvertently act in a completely selfless manner. He makes an innocuous arrangement with a small boy and his mother, and when they don’t show up as planned he wants to know why. Then the questions he starts asking don’t go down well with some very unpleasant people.

No, because things change so much during the writing process that I might say X now and it turn out to be Y a year later.

Maybe a long time ago but I’m too set in my ways now to really change. Plus, I’m a stone-cold cynic so I usually find a way to dismiss any viewpoint that contradicts my own. Perhaps I’ll mellow and be more open to new ideas as I grow older so ask me again in a decade or so.

Because of the past year, that perfect day would be quite ordinary at any other time. Just an easy day laughing and joking with close friends without a pandemic overshadowing everything would be enough for me.

I was very nearly killed by a train. I was in a small village and needed to get back to London. I arrived at the railway station a little too late. The barriers had come down to block traffic and my train left from the opposite platform. It was a tiny station and there was no other way across when the barriers were down. I knew from past experience this happened a few minutes before the train actually arrived, so I climbed over the barriers to cross the tracks. It was at night, but I checked both ways first. I had seen the glow of the train’s headlights in the distance, but because the train stopped before the barrier, there was no danger.

Or so I thought. Turned out, it wasn’t my train but an express train that wasn’t stopping. It only took me a few seconds to reach the second barrier and it only took the express train a few seconds to reach me. I had on a backpack and the train hurtled past so close to me that it actually clipped the backpack. Had I been even a split-second slower crossing the tracks I would have been hit and killed instantly. The resulting burst of adrenalin was like nothing I had ever experienced before or have since.