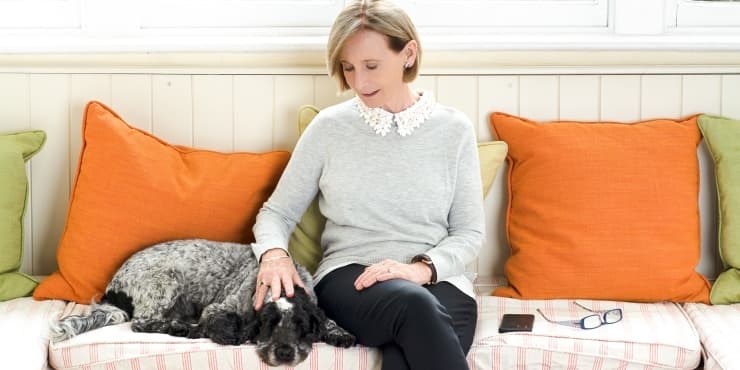 Jane Shemilt is a best-selling author of psychological suspense novels. Her debut novel Daughter was a Richard and Judy pick, shortlisted for the Lucy Cavendish award and nominated for an Edgar award. It became the fastest selling debut of 2014. Her third novel, How Far We Fall, has been optioned for production as a TV drama by Twelve Town.

Jane’s stories are inspired by her background in psychology and medicine. Jane's latest novel, The Patient was published on 28th April by HarperCollins and is also available on our catalogue.

In literary terms my heroes were all heroines: Jo March, Jane Eyre, Anne Shirley, Sarah Crewe, feisty, brave and determined - they conquered all their worlds.

But in real life my hero was my father, a quiet consultant surgeon in Salisbury. He was brilliant at his job and loved by all his patients. He would cycle to work daily for a full day of operating and clinics and return home sometimes in time to work in the garden. Once he was on television and we went next door to watch, not having one of our own. We were a little late and by the time the set was switched on we just saw hands, immediately recognizable as his. He has sewed up the heart of a young boy who has been running along the beach and fallen on a stick. That was a rare insight, he didn’t talk about his work at home, but when I began my own medical training he told me about hope, how important it was never to take all hope from patients, that it would be like pulling a rug from under their feet.

He taught me tennis and how to revise. We went on Sunday walks and when we were little he’d bring saucers of the new potatoes he’d grown, hot and salt with butter, to our bedrooms when he and my mother had them for supper. He was kindness incarnate and his unconditional love has lasted me all my life.

I chose to read medicine over my first love, English, after a gap year in Africa. I taught in a mission centre in the eastern highlands of what was then Rhodesia, an area where there were few doctors. It struck me at the time that medicine might be the most useful thing to study, after all you can't really attend to anything else if you have acute abdominal pain, or even earache. I thought I’d come back to writing though I didn’t quite realise how many years that would take.

Looking back I'm grateful to have spent the time in medicine, it's an astounding privilege to be alongside people at the greatest crises of their lives- birth, death and all the dramas in between. I draw comfort that there was a long phase in my life when I was helping others; it allows me now to be selfish and sit at my desk thinking only of the book I am writing without drowning in guilt.

Medicine is also a place of story, where you learn that everything has a beginning a middle and an end and there are plot twists along the way. Being a GP teaches you the importance of empathy; you are alongside your patient in the same way that you are alongside the characters you create and try and see the world from their point of view.

General Practice is a world everyone has experienced but not so much is known about the lives of the doctors; in my book The Patient, the reader will get to see behind the scenes in ways they might find shocking.

Yes, in retrospect. At the time I was completely focused on writing. It was such a dream to write and starting late as I did, I had a lot of ground to make up. I’d never heard of social media, so wasn’t as aware as I would be nowadays of how well the book was doing. It was all about the writing at the time. I didn’t take in the success to be honest; I’d look at the Sunday Times best seller list when the paper arrived and think oh that’s good and go back to writing the next book. Like many big, even life changing events, it didn’t really impact at the time. Now I see how inordinately lucky I was.

I’d had lots of help of course. I wrote the first draft while doing an MA in Creative writing at Bath Spa University, so I had generous feedback from colleagues who told me they were waiting for the next instalment week on week which spurred me on to write the best next chapter as I could. The tutors were brilliant. Later my agent and publisher gave me edits which helped me polish the book to a high shine.

I research settings extensively. I travelled to Botswana for my second novel, The Drowning Lesson, leading to an extraordinary and privileged encounter with a village healer; to the island of Jura for How Far We Fall when I was lucky enough to glimpse the house in which George Orwell wrote 1984 which became the setting of a holiday house in my book, the huge whirlpool off the tip of the island also found its way into the story. We explored The Peloponnese for Little Friends and went on a walking holiday in Provence to capture the essence of that beautiful countryside for The Patient.

Those landscapes, the light, sounds and scents became part of the story I'm not usually away more than a couple of weeks at a time though it's often not the length of the experience that counts but the depth; the chance to pay proper attention to surroundings and people that seems to be a natural part of travelling

COVID struck in the later stages of writing The Patient and I couldn’t travel to Salisbury Close where my protagonist lived; luckily that’s where I grew up so I could walk myself back through the Cathedral and into the houses of friends I known, as easily as if I’d been able to return in real life.

I researched a lot into the nature of evil for How Far We Fall but after filling several notebooks I laid them aside and wrote, research being just part of the mulch in which a story grows.

An affluent market town GP has an electrifying affair with a patient, leading to a series of chain events that culminate in murder.

It deals with second chances, mental health and the impact of shocking events on small town community

It is set in Salisbury where I grew up, as well as Provence, and was partly inspired by a young psychotic patient I met when I was a medical student many years ago.

In the words of my agent: The Therapist is a gripping psychological thriller that opens on the island of Paxos; the devastating consequences of shockingly violent acts perpetrated by the drunk guests of a wealthy holiday home owner play out in twisty story of revenge and hubris that spans twenty years.

It deals with themes of class, female empowerment and arrogance that comes with entitlement.

The Therapist will be out in Spring 2023.

Van Gogh’s 'Long Grass with Butterflies' (1890) now in the National Gallery in London.

When I saw this, I could feel the sun, hear the low buzzing of insects and smell the meadow grasses. It brought home to me the immersive power of a work of art and how the world can be reimagined with intensity to make it more itself. Van Gogh used colour and form to create experience and feeling in a way that cracks open the world; looking this painting, the meadow seems as new and fresh as if I was experiencing it for the very first time as a child.

The one that has stayed with me though it was neither funny or exactly strange is the time a woman at a library talk I was giving, told me that a line from my first book Daughter had helped them: the protagonist in that book had lost her child and her marriage, she was alone in a cottage and put her cup down on the side of the bath; it made a clinking noise in the silence. The woman in the audience related strongly to the loneliness in this because she was going through a divorce and had listened to the sounds one person on her own makes in the same way. She said knowing there was someone else going through a similar experience, even if fictional, had made her feel less alone.

It came as a story from one of my MA tutors; she talked about a peanut butter jar stacker in a store. What if the store manager came across him in one of the aisles in the shop, sitting on an unopened box of jars and his excuse was he didn’t feel like stacking that day? It wouldn’t wash if he were to tell the manager he was waiting for the muse to appear. Even if you don’t feel in the mood, those jars have to be stacked. It's the same with writing.

I have a spaniel in all my books – dogs are brilliantly humanising - even a baddie becomes more relatable if he has a soft spot for his spaniel puppy.