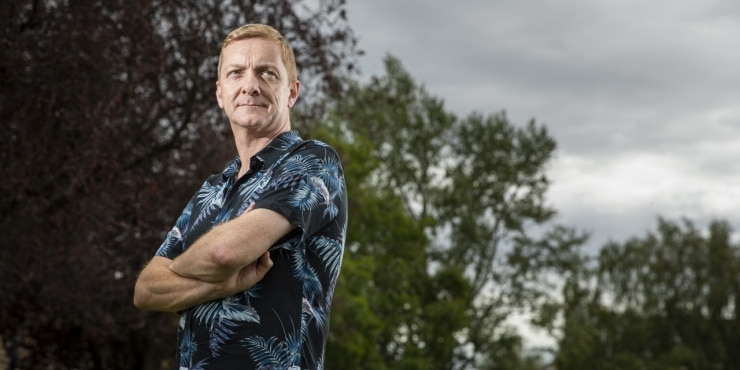 Doug Johnstone is the author of thirteen novels, most recently The Great Silence (2021). His previous book, The Big Chill (2020), was longlisted for the Theakston Crime Novel of the Year. Several of his books have been bestsellers and three, A Dark Matter (2020), Breakers (2019) and The Jump (2015), were shortlisted for the McIlvanney Prize for Scottish Crime Novel of the Year.

Doug is also a songwriter and musician with six albums and three EPs released, and plays drums for the Fun Lovin’ Crime Writers, a band of crime writers. He’s also co-founder of the Scotland Writers Football Club. You can find Doug's books on our catalogue.

Yeah, it was a long and convoluted way to becoming a writer, to be honest. I was always writing stories at school and throughout university, but I studied physics, you’re right. I don’t see that science and the arts are opposites at all, they’re both a mix of graft and creativity, really. Anyway, I was in bands at uni and afterwards, and started a fanzine writing about other bands, then decided to quit my office job as an engineer and started working as a music journalist. It was only then I started taking my fiction writing more seriously, so I began working on my first novel. A few years and a ton of rejections later, I got a different novel published. That was fifteen years and thirteen books ago, so maybe I made the right move.

I like to do my writing in the mornings when my mind is more fresh. Once the kids are off to school, I head into my office up in the loft of our house, which only has a tiny skylight in it. There I’ll usually write in short, sharp bursts for most of the morning, and that’s usually enough to get a chapter onto the page. I write short chapters. Repeat that seventy times and you have a sh***y first draft of your book. Before I start to write chapter one, I usually spend about a month planning and plotting, thinking about the whole thing and making notes. Then after the first draft, I usually spend a few months redrafting, trying to knock it into shape. At some point my agent and editor see it, and I take on board their feedback. Then more edits until your eyes go blurry. I very rarely work on fiction in the afternoons, I can’t summon up the creative energy, but I do other stuff – teaching, journalism, music, admin, a million other things that put demands on your time.

There were a couple of main sources for the initial idea of the books. The first was that for years and years I’ve had the idea of a character who has to take over a PI agency and has no idea how to do it. And I even had the name Jenny Skelf. Then a few years ago I was the writer in residence at a funeral directors. Long story short, I wrote a small non-fiction book about the staff’s experiences, and I mucked in and helped with all aspects of the business. That experience had a profound impact on me, and it niggled away at me until I had to write about it.

As for ideas and characters changing – that happened a fair bit at the start, when I was trying to work out what I wanted to write about. But once I started the first book, it’s more that the characters have grown as I’ve been writing. And the ideas that I’m writing about have hopefully become a little more profound and deep, at least that is the aim.

The central premise of all three books is that three generations of women from the same family have to take over the running of a funeral directors and private investigators when the patriarch of the family dies. So you have Dorothy in her 70s as the matriarch, her daughter Jenny in her mid 40s and Jenny’s daughter Hannah who’s 20. They have to deal with their own grief as well as the grief of others with the funeral business, and they have to solve mysteries that clients bring to them. In The Great Silence, the book starts with Dorothy’s dog discovering a human foot in the park outside their house. That leads her down a rabbit hole into a very dark place. Meantime, there are bodies to be buried, cases to be solved, and their own personal crises to deal with. Plus sightings of a black panther in the suburbs of Edinburgh. And about a million other crazy things. The books are darkly humorous, but also look at how we connect with others, dead and alive, at crucial moments of our lives.

I do spend a lot of time on research, both of physical settings and other technical details. But it’s important to wear that research very lightly. We’ve all read books where the writer is showing off how much they’re learned, and that can be a real turn off. The trick is to write a gripping story that’s informed by your knowledge, not a slave to it. I always have to have been to a place before I write about it, that goes for Orkney, Islay, South Queensferry, Arbroath and so on. With the Edinburgh books, I’ve lived in the city for over thirty years, so it’s a matter of tapping into the energy of the city as honestly as possible to really convey it vividly to the reader.

Well I’ve just finished writing a science fiction novel, which is very different for me. It’s a first contact novel, where aliens come to earth and contact humanity for the first time. It’s also a kind of road trip across the Scottish Highlands, and a meditation on communication and connection. Thelma and Louise meets ET, maybe. I’m also just about to start a new Skelfs book, but I don’t want to say any more than that at the moment in case I jinx it.

Willy Vlautin. He’s a criminally underrated American author who writes about the underclass of society and the failure of the American dream. He writes with such empathy for his downtrodden characters that it’s impossible not to fall in love with them. But he never gives them an easy ride. His latest is called The Night Always Comes, and is his best yet – a nerve-shredding, white-knuckle thriller around Portland as a woman tries to scrape together money she’s owed to put down a deposit on a house. It’s very dark, but wonderfully human.

So much stuff! I’m just starting Louise Welsh’s next book, The Second Cut, a follow up to her terrific debut The Cutting Room. After that I’m looking forward to books by my bandmate Stuart Neville, Ruth Ozeki, Richard Powers, Antti Tuomainnen and Lilja Sigurdardottir.

The idea came five years ago in New Orleans. Myself, Stuart Neville and Mark Billingham did a few tunes at an open mic night as part of a crime writing convention over there. We came off stage and decided we could probably put a band of crime writers together back home in the UK. So we enlisted Val McDermid, Luca Veste and Chris Brookmyre, then played our first show that Edinburgh Book Festival the next year. It’s been a crazy ride. We cover songs about murder, crime and death, and it goes down great, the place is always jumping. Glastonbury was insane, we played there two years ago – the crowd was massive and really into it, we were so buzzing, I still don’t think I’ve come down. We can’t wait to play live again, and we’ve just announced our first show in 18 months, at this year’s Bloody Scotland festival in Stirling in September. Come and dance!

I once met Kurt Cobain. 1991 in my local pub, before they were famous. Nirvana played an acoustic show for charity there, because my flatmate was their tour manager’s brother. He was very weird and distant. Asked me if I had any Benylin. I did not. The gig was amazing, though.