Our annual People’s Champions Awards event provided an opportunity to acknowledge the tremendous contribution of all our volunteers. It was also a chance to share some really heart-warming examples of what goes on in libraries and the huge impact that our volunteers and staff have on people’s lives.

We wanted to pay further tribute to the award winning volunteers some of the stories behind their awards. 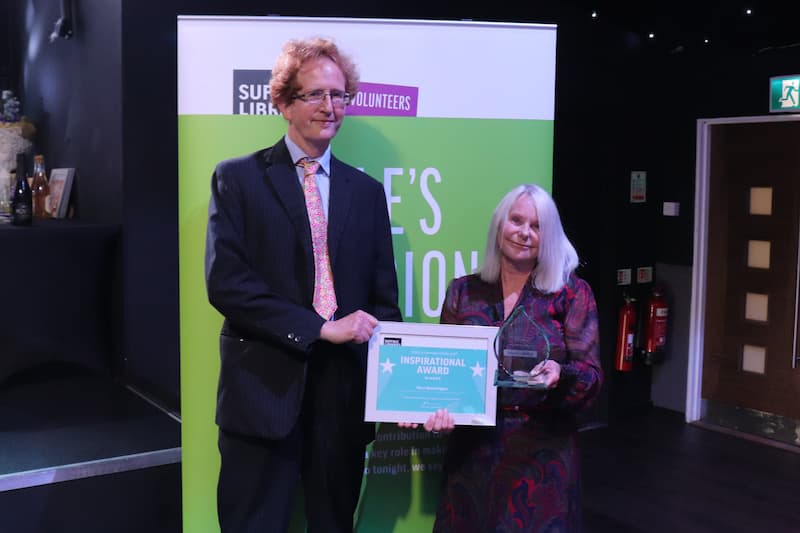 Freddie Gathorne-Hardy, Managing Director of Christie Care, presenting the award to Karen Goffin from Lowestoft Library accepting the award on behalf of Mary.

Mary showed great determination to find some positivity and purpose after struggling with the loss of her husband. She began making greeting cards to sell in the library and her hand-stitched cards have been very popular with customers. She even goes the extra mile by making bespoke cards on request.

One of the judges for the award said it brought tears to her eyes reading how she had brought so much joy to people, despite her own bereavement. The judges were also impressed by the fact that the sale of her cards generated around £5,000 for the Library Friends group which has been used to buy items and equipment to enhance and improve Lowestoft Library. 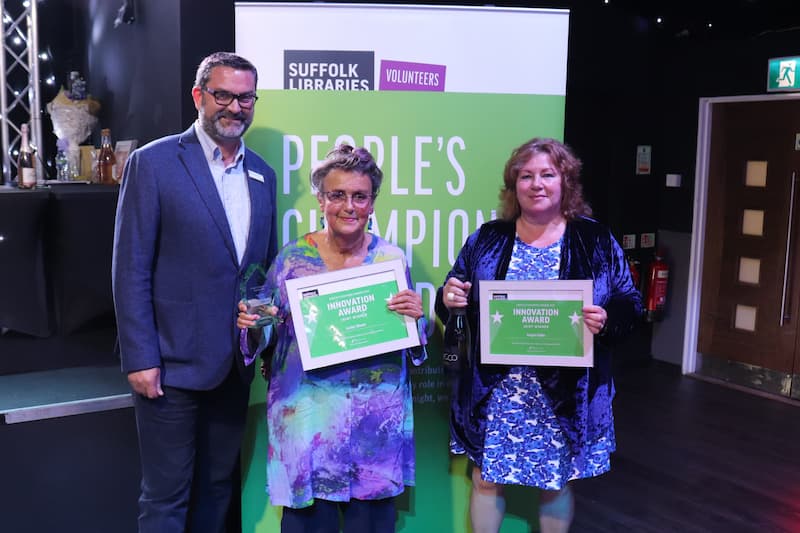 Jon Neal, CEO of Suffolk Mind presenting the award to Jane Jenkins and Nicola Flowitt who were accepting the award on behalf of Angela and Lesley.

This was a joint nomination for Angie and Lesley who had the excellent idea of setting up a pop-up community garden which kept Ixworth Library in the public eye during the height of the COVID pandemic. Their garden not only raised the profile of Ixworth Library during a time when restrictions and closures reduced library visits, but also gave the Friends groups a positive focus and brought people and organisations together to make it a success. Their imagination and commitment united different generations within the community at a very difficult time. 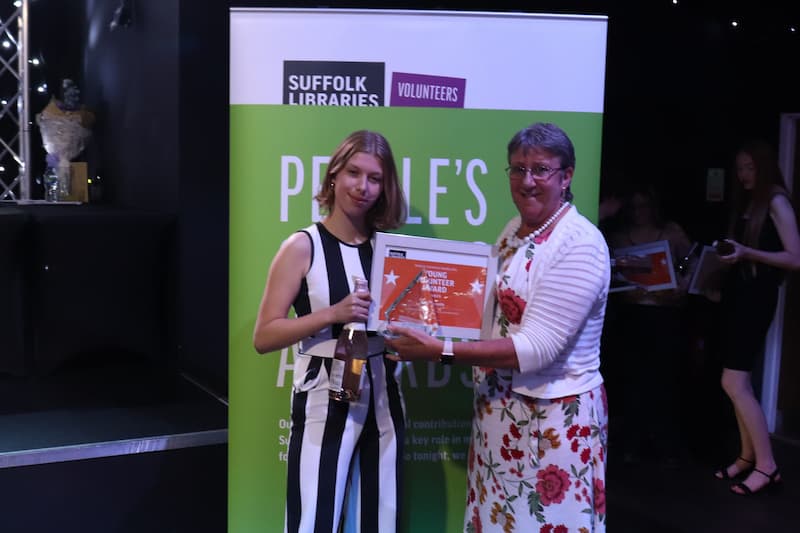 Olivia volunteers with the Sunday craft session and was nominated by three different people. She is described as smiling, upbeat, a pleasure to be around and wonderful with customers.  The judges were particularly impressed with the way in which she interacts so positively with everybody, including children and people with disabilities. One of the nominations said:

“She is hands on in terms of showing the children what to do and provides a helping hand should it be required, but importantly, she leaves the children to express their creativity and praises each piece of work.” 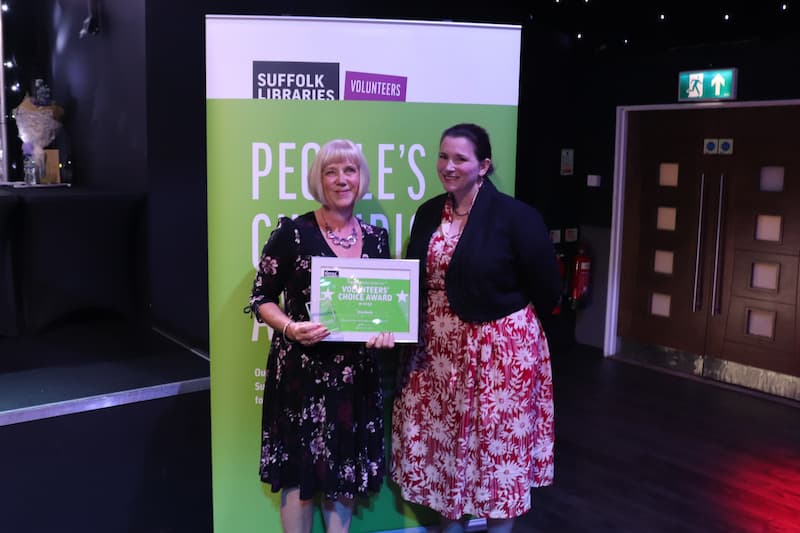 This award is for a staff member who regularly goes above and beyond in championing and galvanising volunteers, supporting them, and providing advice and practical support.

“She lent her ear and helped me exceptionally at that time. I’ve have learned a lot from her, especially people interactions and management”. The nomination also praised her for being remarkably good with children, saying “They all love her”.

Winners – the award was won jointly by the Men Can Talk group at Chantry Library and the Glemsford Friday Café volunteers. 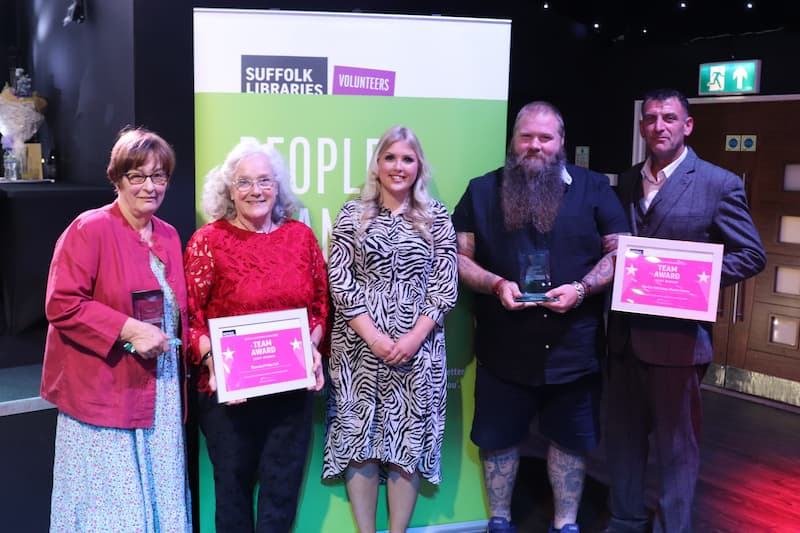 The judges were unable to choose between these two nominations and decided to make this a joint award.

The volunteers who run the Men Can Talk Group have created a safe space for all men to meet, have a chat and a laugh, and if they want to, open up about issues affecting them. The judges were moved by the positive impact that the Men Can Talk group has had on local men who may be struggling in some way. For example, someone who had recently lost his partner and was suffering from anxiety found the group a friendly and safe haven and a place to talk to other men about their issues. The judges were also impressed by Glen, Corrin and Wayne’s enthusiasm in volunteering at library events, such as the Winter Wonderland. Corrin recently undertook a successful fundraising challenge cycling to every library in Suffolk and the team have become a key part of Chantry Library.

The volunteers from the Glemsford Friday Café impressed the judges with their commitment to the café  which has been running for many years. The volunteers not only bake cakes, hold regular planning meetings, undertake training and set up the café each week, but they also run the singing sessions which have become a much-loved part of Friday mornings in Glemsford. They also work closely with library staff, encouraging people to get a library card, and promote library events and activities. The person who nominated them said,

“I have rarely met a more dedicated group of people” 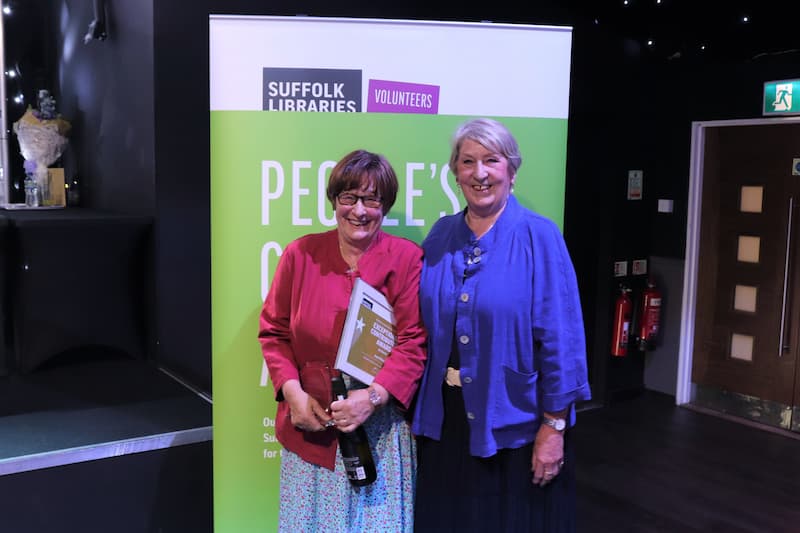 Anne is a volunteer who received four nominations and was described as the backbone of the library. Whether she’s checking in on the staff and picking them up when they’re down, promoting the library throughout the village, engaging others to help support the library, running friends group events- or co-ordinating the Summer Reading Challenge, nothing is too much trouble for this volunteer whose contribution to the library is described as immeasurable.

Anne also clearly gets a great deal from volunteering:

“I moved to Glemsford ten years ago and didn’t know anyone. My first thought was to go to the library and ask if they needed help and was asked if I wanted to join the newly formed Friends group. I can see how valuable and worthwhile everything that happens at the library. At the regular sessions for older people for example - people tell us what a lifeline it is.

“Volunteering has been incredibly important as it got me involved in village life and helped me make friends. You can develop a much deeper relationship when you’re working together.”

How Suffolk Libraries brings people together

Pride in the libraries! Suffolk Libraries at Suffolk Pride 2022