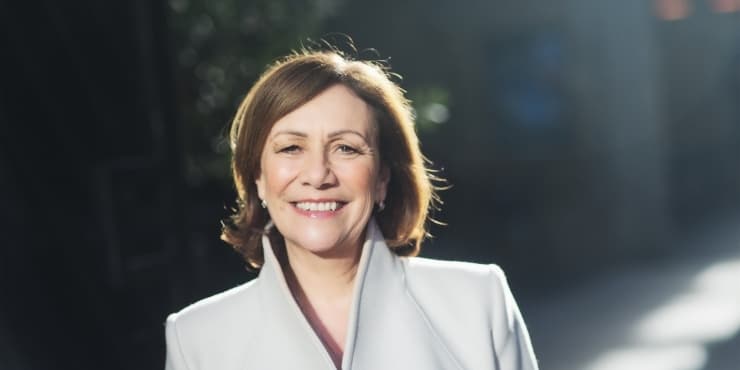 Sheila O'Flanagan is an ex-bond dealer and financial journalist whose novels have all been immediate No. 1 Irish bestsellers. She was the recipient of the prestigious Irish Tatler Literary Woman of the Year award in 2003, and was shortlisted for the An Post Irish Popular Fiction Book of the Year Award 2021 for Three Weddings And A Proposal. Sheila's latest book, What Eden Did Next, is published by Headline in April 2022 and is also available on our catalogue.

My greatest hero was the tennis player Billie Jean King as she was small in height, short haired and wore glasses, like me. I had an old racquet and used to play against the back wall of our garden, imagining I was her and inventing stories about her (none of which were half as amazing as her actual life). I loved her determination to succeed. I never wrote down my BJK stories, but when I was bouncing that tennis ball I’d often make up others that I did write down. I’ve been writing stories of some sort ever since I was about eight.

I think being older certainly gave me a different perspective on achieving your goals and how it’s never a straight line towards what you want. Like most authors, I worked in a very different industry by day and wrote at night. It’s rare for people to be successful at a very young age, although maybe these days that depends on what your definition of success is. For me it’s writing a good story and knowing that people are happy to buy the published book. I always hoped that this type of success would come to me one day and I’m very lucky that it did.

Eden is a young widow who has spent the five years since the death of her husband working as a carer and raising their daughter alone. Although she’s always believed that she’s put the defining tragedies of her life behind her, and that the support of her late husband’s family is an integral part of how she lives now, a chance meeting with a childhood friend revives memories of more carefree times. Suddenly she feels that she needs to stop looking backwards and move on.

But with other people making life-changing plans that she’s an important part of, redefining herself is not as easy as she thinks. Eden has to decide what’s most important to her - following her own path, or giving in to the pressure to preserve what has mattered most to her before.

It always takes some time to get into the head of the characters you’re writing, and as the characters develop they often do things you don’t always expect or react in a way that surprises you. Eden starts out as someone who is outwardly very strong, even after her tragic loss, but who relies a lot on her late husband’s family, to the extent of allowing them to have too much of a say in her life. I needed to think a lot about her personality and how this happened, and how she would react if and when she wanted to do something they didn’t approve of. And so I worked on the layers of her character and her past life, so that she could take ownership of who she really was and who she wanted to be. I hope that by the end of the book she’s realised how strong she really is.

Ideas often come to me when I’m writing - I think of a possible plot line and decide it won’t work in this book but that it might in another. I usually have a few vague ideas floating around and eventually one of them becomes the story that really wants to be told. Sometimes I have an idea but I’m not entirely sure how to craft it, and it lodges in my head, maybe for a few years, until I find a way. I do enjoy research and that’s taken me to an air traffic control tower, a meteorological office and an archaeological dig among other things.

I write sitting at a desk in what used to be my garage but is now my office. The desk is beside a window so I can look out at my garden (which is a building site at the moment as I was adding on a sunroom but “supply chain issues” have delayed things!). When I’m working hard on the first draft I try to be at my desk by nine, deal with emails etc, and then start writing by ten. I’ll do a couple of hours in the morning, go for a walk at lunchtime, and then return to it for the afternoon. I edit at my desk too, but as I get further into editing I sometimes do this on my iPad in the living room.

I think it was the man who told me he’d read one of my books and now knew why his wife had left him!

I don’t think I have the patience to plot a police procedural! I’m very much a seat-of-the-pants writer and change things all the time. I’m not sure I’ve the skills for a procedural, even though I absolutely love reading them myself. But maybe that’s a good thing.

The Concierto de Aranjuez by Jaoquin Rodrigo. It’s the most beautiful piece of music and always stops me in my tracks when I hear it.

People who put more than 10 items in their basket at the ’10 items or fewer’ checkout at the supermarket and who then make a complete mess of packing their bags because there isn’t room to unload everything!

I wanted to be an astronaut when I was a child. My dad brought us to an observatory and I’ve been hooked on astronomy ever since.