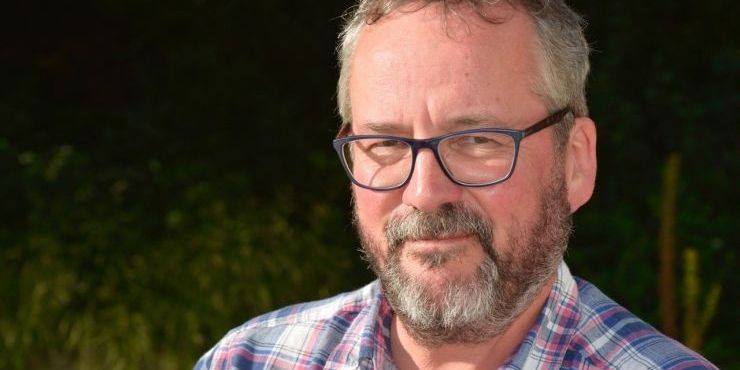 Michael Jecks is the bestselling author of over 40 novels including the Knights Templar series. He is a past chairman of the Crime Writers Association and a fellow of The Royal Literary Fund at Exeter University. You can access a wide selection of Michael’s books in hardcopy and on e-book via Suffolk Libraries.

This is not so easy, because I cannot remember a time when I wasn’t an enthusiastic reader. I spent all my spare time reading, saving money to go and buy more books, rather than sweets.

Initially, I know, I was keen on a number of books with pictures, but I think I was only about six or seven when I progressed. I read Michael Bond’s Paddington series, and quickly progressed to Richmal Crompton’s William stories, at some point passing through Malcolm Saville, a few of the Enid Blyton books (Famous Five etc), and then, when I was eleven, coming across JRR Tolkien - which was a revelation. And then I discovered PG Wodehouse. Not long after that I started reading George MacDonald Fraser too, and Flashman has been a firm friend ever since. He even tempted me to try Tom Brown’s Schooldays - although I didn’t manage to finish it!

Honourable mention also has to go to Henry Fielding (Tom Jones), and Dumas for, particularly, The Count of Monte Cristo, which is still one of my favourite books of all time.

At the time when I really should have been studying A levels, I discovered Frederick Forsyth, with Dogs of War, Day of the Jackal, and Odessa File, which I consumed avidly. Douglas Reeman and Wilbur Smith both had fabulous collections which I had to read.

And all the while, I wanted to be a writer. I made notes, scribbled stories, and … Well, to be frank, I always thought it would be a mug’s game to try to make a living as an author. I thought it would be unstable, unpredictable, and probably a short approach to bankruptcy. I focused on O and A Levels so I could get a good job with a reliable monthly income and pension.

And then I went to university, got a job, and soon learned that no job is secure - I managed thirteen jobs in thirteen years, and only after that started writing in earnest!

I suppose I’ve always been fascinated by the idea of knights in armour. It’s the concept of chivalry, and the idea of men dedicated to upholding the law and the rights of the poor. The “perfect, gentle knights” were beacons of honour and heroism.

Of course, the trouble is, that is not how mediaeval England was. It was a period in which the poor had no rights. Knights, especially those with Norman blood after the Conquest, were vicious, brutal men, contemptuous of the population they had conquered, and treated them like slaves. No woman was safe from their depredations, and knights themselves were not honourable in the way we would consider, as can be discovered by reading Terry Jones’ excellent Chaucer’s Knight.

It is largely this void between the perception of life in the mediaeval period and reality which has inspired most of my books. I like to point out the differences between what is taught in schools and the reality of the grim life endured by the English population.

Research is a two-edged sword.

In truth, I love researching. It means, to me, sitting at my desk and reading books - note: not Wikipedia! Books will have been written by people with a real interest in their subjects, edited by people who know their topic, copyedited and proof checked, and often read by expert fact-checkers. Wikipedia, on the other hand, is unregulated and the information there cannot be trusted.

Research has given me a huge amount of pleasure - but it has got pitfalls.

For example, once I read an interesting and intriguing item on the internet. It related to a form of storm troop within Muslim armies. They were dedicated and fanatical, and would throw themselves into a battle and often swing the fight in favour of their side.

The trouble was, when I hunted for evidence of these warriors, I could only find three sources on the internet. All referred to each other for validation. When I looked through my library for references, there were none. I had to conclude that the information on the internet was false.

Another time I had an idea for a book and spent nearly a month hunting for anything I could find about Widecombe Fair in the 1330s. I found nothing: not in the British Library, nor the Devon and Exeter Institution, the Devon and Cornwall Record Society, the Archive Office - nowhere. At the end of that time, desperate, I spoke to the librarian at Exeter Cathedral to ask for his advice.

The result? “Widecombe Fair in the 1300s? You’ll find that hard. Widecombe Fair was founded in 1850!” So although I love research, it does have risks!

This is the latest in my Bloody Mary series, which follows the antics of a not very competent thief and pick pocket during the reign of Queen Mary called Jack Blackjack.

He has been contacted by the hangman, Hal Westmecott, to help supply gunpowder. Often when priests were condemned to be burned at the stake, the executioners would hang pouches of gunpowder around their neck, under their armpits, at their groins, so that before the flames could condemn the victim to too much pain, the powder would explode and kill them.

Jack sold him damp powder, and now Westmecott wants a favour, or else. Jack has to find his wife and child, who have left him. Jack is sure that he’s been set an impossible task, but he’s in no position to refuse.

But when Jack tries to find the hangman’s family, he soon finds himself drawing attention from a ruthless nobleman, a dead priest’s vengeful brother, and then some of the most powerful in the kingdom. He is the unwitting pawn in a mesh of schemes that threaten to his life.

I was privileged to meet with a lot of writers on panels and at events over the years and it occurred to me that it could be fun to give talks with some of them on a more regular basis.

Over time, I got to know Bernard Knight (1100s), Ian Morson (1200s) and Susanna Gregory (1300s - post plague). It struck me that, not only were these all good company, they meant that we had a group of dedicated crime writers who could also speak about the entire mediaeval period. When we later met Philip Gooden, Karen Maitland and CJ Samson, it was clear that we had a strong team.

Initially we were only a performance group, explaining about our various periods, but also giving anecdotes about our lives as writers. Soon we had the intriguing idea of writing a novel together. We discussed the idea at length, eventually coming down in favour of a book based on a series of interconnecting novellas, each involving our own characters, but each dovetailing with subsequent stories.

The first, “The Tainted Relic”, followed a splinter of the True Cross from its capture during the First Crusade all the way to the present day, and formed the basis for how we would work collaboratively: each providing a story, one of us writing an introductory Preface, and another giving an Epilogue. The series grew, to our astonishment, to a total of ten novels. We are now in the process of planning an eleventh!

This is difficult. I am now writing the sixth in the Bloody Mary series, which has been great fun. I’ve dragged poor Jack down to Dartmoor, where he’s getting a crash course in the tin mining industry, the local tribe of thieves and felons, and in the less than pleasant aspects of local justice (Lydford Law).

After that, I have a series of books to edit. First there is a recent historical crime story set in the 1920s; then I have the thirty-third book in the Last Templar Mystery series to edit; third I have a modern day crime/spy story, The Sniper, which was the first book I ever wrote, and which I have edited but needs a little finessing, as does a non-fiction book on getting a job when you find yourself unemployed and two other books in a new series that need work. I’ve also had two authors ask me to collaborate with them on ideas that are rather appealing. Oh, and I’ll have to write book seven in the Bloody Mary series later this year.

I originally thought that writing would be a nice, relaxing, easy job. I didn’t expect to be this busy!

This is another tough one to answer. At the moment I am reading the latest Karen Maitland, which is a superb read. I tend not to read too much crime fiction, because I’m always terrified of accidentally stealing a plot, but I find it hard to turn down any Michael Connelly or Dennis Lehane.

Recent books that have grabbed me were Bugles and a Tiger, and The Road Past Mandalay by John Masters (the author of Night Runners of Bengal, The Deceivers and The Ravi Lancers - all brilliant), both of these are superb non-fiction about his time in the British Indian Army and Gurkhas before and during the Second World War. They are the only memoirs which match, to my mind, the superb Quartered Safe Out Here by George MacDonald Fraser about his time in the army in Burma.

I also hugely enjoy a good spy novel. John le Carre was always one of my favourite novelists, as is Simon Conway, who writes with a real knowledge of that strange, closed world. And I am currently working through the books of Sabine Baring-Gould.

But I could write a thousand words just on my current favourite authors. I still love reading books of any sort. Every Christmas I have to read Dickens’ A Christmas Carol, and I’m going to reread Great Expectations and Pickwick Papers this year.

There are two things, really.

First is that authors have to have exercise. When you spend twelve to sixteen hours a day sitting at a desk, exercise is very important indeed. Although I love walking over Dartmoor with my dogs, that isn’t quite enough. So some sixteen years ago I became one of the founding members of Tinners’ Morris, a morris dancing side based here in Dartmoor.

However, although we’re most often to be found in Devon and Cornwall, we also travel. We have danced all over England at festivals - we’ve been the headline act at the Royal Cornwall Show for a decade - as well as travelling to Guernsey and France.

But I am also a keen watercolourist. I love the way that watercolour works, and I also love the way that painting helps fix places in my mind. When I research an area I want to write about, it’s easy, of course, to take a quick photo to fix it. But a photo is fleeting, and although I will often use it as an aide-memoire, I find that painting a scene forces me to analyze an area much more effectively so that I can remember it later. I love painting village scenes, the moors, and the countryside.

One day I hope to be able to spend more time with an easel and brushes - but not yet!

Revel in the delights of the Medieval period with some of these Michael Jecks titles available on our OverDrive service.