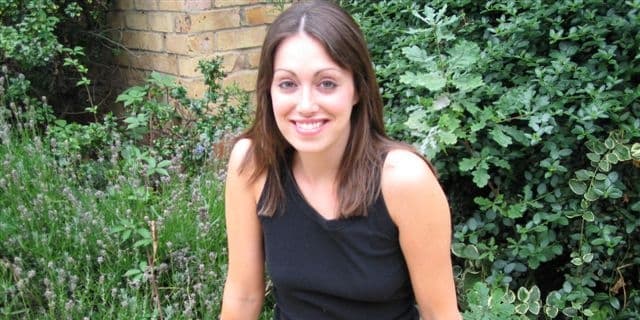 Lucy Caldwell is the award-winning author of three novels, several stage plays and radio dramas, two collections of short stories: Multitudes (Faber, 2016) and Intimacies (Faber, 2021). Her most recent novel, These Days is published by Faber in March 2022.

Lucy has won numerous awards including the Rooney Prize for Irish Literature, the Irish Writers' and Screenwriters' Guilt Award, the Commonwealth Writers' Award (Canada and Europe) and many more. She is also the editor of Being Various: New Irish Short Stories (Faber, 2019).

You can find These Days and other titles written by Lucy on our catalogue.

I didn’t have heroes: I had my sisters. There are three of us, all very close in age, and we lived for a lot of our time in imaginary worlds that unfurled over years and years. Sometimes we’d write them down in ‘books’ of folded-over pages, or pages that my dad would bind to look like actual books. Sometimes we’d act them out with toys or dolls or Lego figures, or we’d play-act them ourselves. Sometimes we’d make pacts to meet up in our dreams and carry on the adventures. But I’ve never not done it, and in many ways I’ve just never stopped.

It’s set during the Belfast Blitz of April - May 1941, which caused great devastation and mass casualties, and which people did not think the city could ever come back from. It follows a fictional family through the four nights of aerial raids, but it takes in real people and real experience, too. It came as such a shock to me to discover how little fiction there is written about the Belfast Blitz. Your readers might be familiar with Brian Moore’s brilliant The Emperor of Ice-Cream, recently reissued, in fact, by Turnpike Press – but there’s almost nothing else, as if the later versions of the bombed-out city obliterated that version of it.

But it’s still just about within living memory, and one of the best things about writing it was gathering real stories. It takes its epigraph from a line by Louis MacNeice: “These days, though lost, will be all our days”, words which seem to resonate with what it means to live through the Troubles, or Covid, or even – as I type this – the horrendous news of the war in Ukraine. It’s about ordinary people in extraordinary times, it’s about love, and resilience, and most of all about hope, I think.

It’s a novel I never imagined I’d write – I’ve never written historical fiction before – but I loved it. I loved the research, which for me is often one of the most enjoyable stages of writing something, the licence to read widely, freely, closely, learning things, making notes, not quite knowing what it is that you’re looking for, the one tiny detail that you can use to bring a world alive. I loved the technical, linguistic challenge of it, combing through diaries and novels from the period, noting that Virginia Woolf says not ‘mirror’ but ‘looking glass’, that Elizabeth Bowen says ‘wristwatch’, that Doreen Bates calls her matching skirt and jacket not her ‘outfit’ but her ‘costume’, getting the balance in my own prose between a sense of authenticity and parody.

Most of all I loved speaking to real people who had lived through the Blitz – some as children, and one woman in the year of her 103rd birthday, who had been posted to Belfast to work with Fighter Command. Gathering and saving and using their memories felt so precious as Covid swept in. But even when you’re writing historical fiction, you’re always writing about our own times – the film Amadeus tells us as much about the 1980s as it does about Mozart – and for me, plotting my characters’ paths through the April-May of 1941, as we were in that terrifying and unprecedented lockdown, was a way to contain and reflect on our days, too.

That’s right: I never write until I can hear it. I thought about my short story “All the People Were Mean and Bad” for more than a year before I wrote a word of it, and as soon as I realised that the tone needed to be one of elegy, and as soon as I could hear that tone, I wrote it in two days. If a piece is more character-driven, I’ll often go through large parts of my days half day-dreaming, letting the character talk in my head, just listening in, until I feel I know them well enough to start writing.

The indication that it’s happening is when I keep getting out my phone to type snatches of conversation down – that feeling that it’s coming to the surface. It’s something you don’t have much conscious control over, but it’s always a reminder that day-dreaming, gazing out of a window, walking aimlessly, is so important, especially when the impulse can be to reach for your phone, for Twitter or whatever, out of boredom.

During the workshop of my first professional play, Leaves, we had a formidable Irish actress, Brid Brennan, who kept tripping up on one particular line. I asked her what the matter was, and she said she thought there was one syllable too many. I reworked the line – and it sang. Having people embody your words so seriously and attentively is incredible, though at times the scrutiny makes you so self-conscious, you don’t know how you’ll ever write again.

Watching actors on stage makes you conscious of how you’re only ever writing the blueprint for something, because they bring so much of themselves to the words, and they make the words alive – the whole meaning of a scene can shift and change from one performance to the next in ways that you weren’t even fully conscious of, when you were writing. I have never cried writing my own plays, because I find you’re too absorbed technically in making it work, but I have cried so often at actors on stage. It’s a kind of magic. It’s also terrifying, but if that appeals to you, even getting some willing friends to read your words aloud is a start.

After finishing These Days, I felt completely eviscerated – like someone had hollowed out my guts with something as cold and blunt as an ice-cream scoop. There was just nothing left. Maybe that’s Covid, too – all of us at the limits of our reservoirs of resilience. But I just had nothing left to give – couldn’t even imagine having the capacity to write anything. For a whole year, then a year and a half, I wrote nothing. It has been hard not to panic that it will never come back. But I’ve written two new short stories in recent months, and I’m working on a very exciting commission where I’m paired with a physicist specialising in dark matter – so watch this (anti) space.

I don’t think there are any ‘shoulds’. I don’t like guilt or shame, either, for things we haven’t or ‘should have’ read. I like to think you encounter works of art at the right moment for you. I read barely any Virginia Woolf until my late twenties, and I am so relieved I didn’t, because I don’t think I would have understood her in the way I do now.

On the other hand, I am so glad I read early Lorrie Moore in my very early twenties, because it spoke to me-then in all the right ways. I’m always thrilled to find someone who has read and loved, say, Susan Cooper’s The Dark is Rising quintet or Louis MacNeice’s Autumn Journal, but part of the thrill comes from the fact of being secret worshippers.

In life, Always buy your round (my dad). On writing, Spend it all, shoot it, play it, lose it, right away, every time. Something more will arise for later, something better. These things fill from behind, from beneath, like well water (Annie Dillard). Maybe what they both share is a sort of generosity. What we give to the world, good and ill, comes back manifold. That’s the advice of so many stories, so many folk traditions. I do believe that.

I have never read the whole of Ulysses straight through, which has been awkward in this centenary year, but even as I’m tempted to say, shh, please don’t tell anyone else, I remember my own answer to question 7…