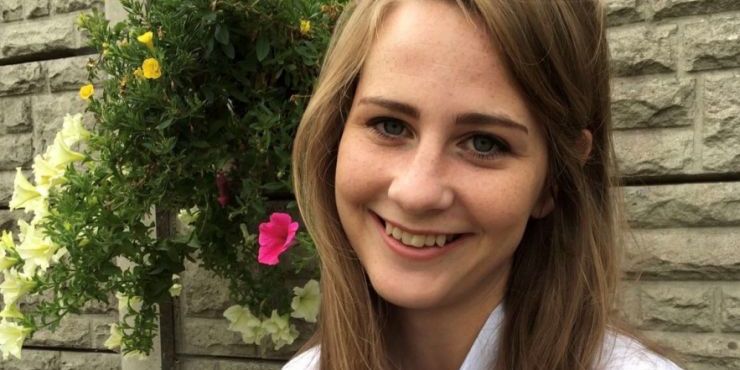 Louise Nealon is an Irish writer. She studied English Literature at Trinity College Dublin. In 2017 she won the prestigious Sean O'Faolain International Short Story Competition. Her debut novel Snowflake was published by Manilla on 13th May and can also be found on the Suffolk Libraries catalogue and in eBook format.

The first fictional person I fell in love was Alice in Wonderland. I had no interest in Lewis Carroll, but I thought Alice was the absolute business. I used to bully my Dad into reading us an Alice in Wonderland pop-up book as a bedtime story every night.

My older sister would suggest other books but I would throw a strop if we ignored Alice. I was quite a shy child, so these tantrums caught my parents off-guard. I always felt very strongly about books. There was another great book called The Tower in Ho-Ho Wood by Enid Blyton which led me onto The Famous Five and then Judy Blume. Reading The Witches by Roald Dahl was a gamechanger for me. It made me realise that you could write about anything – the weirder the better.

I loved the Alex Rider and Darren Shan series. I can’t remember not wanting to write, but I used to think that only magical people were allowed to write books. Growing up, I wanted to be Jacqueline Wilson’s editor. My mother brought me to Eason for a book signing and I was ready to sit down with Jacqueline and discuss how we could improve her books. I thought that she would recognise me because I read all of her work.

Hoopla is a great word. I think the pandemic and lockdown has been a great buffer for me. I’m doing interviews by phone and through screens which suits me, and when I do the odd in-person, socially distanced event, I am able to enjoy it and take everything in. I have been incredibly lucky and the last thing I want is to take any of this for granted. But, as you say, some of the noise around the book is just hoopla which is exciting and potentially stressful, but I’ve given into the fact that I can’t control anything outside myself and my work.

The short answer to this question is that Snowflake was difficult to write. The character of Debbie developed slowly over years. I first started writing the character of Debbie when I was eighteen and finished working on the novel and in Debbie’s first-person narration when I was thirty. I went from being very close in age and experience to Debbie, (Debbie’s first day at university, for instance, was very similar to my own first day,) to having a bit of perspective on Debbie’s world from a (very slightly) more mature age.

I think having that perspective was crucial to navigating the world of the novel. I was closer in age to Debbie’s mother Maeve and uncle Billy when finishing the novel, and I think I needed to see things from their point of view in order for the dynamic of the story to work. Having said that, a lot of the advice I got around writing when I was starting off was to go and get some life experience and to come back to writing when I was older. If I had done that, I would not have written Snowflake and I would have been miserable.

You are never too young to start writing. Mary Shelley wrote and completed Frankenstein before her twentieth birthday. Joni Mitchell wrote Both Sides Now when she was twenty-one. You are never too old to start writing either. The best thing about being a writer is that no one hires you, so nobody can fire you. That’s a great feeling. When you sit down at the desk, it’s just you and your characters, and all you have to do is keep showing up. Keep going.

Snowflake is the story of an eighteen-year-old girl called Debbie who lives on a dairy farm in rural Ireland with her mother and uncle. Debbie’s mother, Maeve, is obsessed with dreams and believes that her dreams are prophecies. She thinks that she has passed this dream dsyfunction onto Debbie. Debbie is quite close with her Uncle Billy who lives in a caravan in a field at the back of the house. Billy assures Debbie that her mother’s talk about dreams is nonsense. He wants her to go to university and escape the world of the farm and her mother. When Debbie begins university, her sense of identity is challenged. She feels alienated and different to the sophisticated friends she meets. She also begins to have very strange dreams.

I’m working on another novel.

Boys Don’t Cry by Fíona Scarlett had me in floods of tears in the best way. I recently read Luster by Raven Leilani and loved it. I also read Larchfield by Polly Clark and Little by Edward Carey, a fictionalisation of the life of Madame Tussauds which was brilliant.

I have lots of favourite authors. Elena Ferrante is the most recent addition to my favourite books shelf. The Neapolitan novels changed how I thought about the world.

Her non-fiction book, Frantumaglia, is the best book I’ve read about the art of writing. I adore Edna O’Brien and the poet, Medbh McGuckian. I love Dermot Healy. The work of Sylvia Plath has been very important in my life. I also have huge love for Patti Smith.

It very much depends on my mood. Sometimes, the perfect day involves good food, tea and books. I love sea-swimming. If I could do a sea-swim in the early morning, and nap and then go for a browse in several bookshops around Dublin, finishing off with a great meal with friends, that would be wonderful.

I love ballet. If I wasn’t a writer, and I magically discovered that I had the talent and ability, I would love to choreograph a ballet. I would like to make ballet more accessible to people of all shapes and sizes, genders, races, backgrounds, sexualities and tastes. I believe that there is so much potential in ballet as an art form.