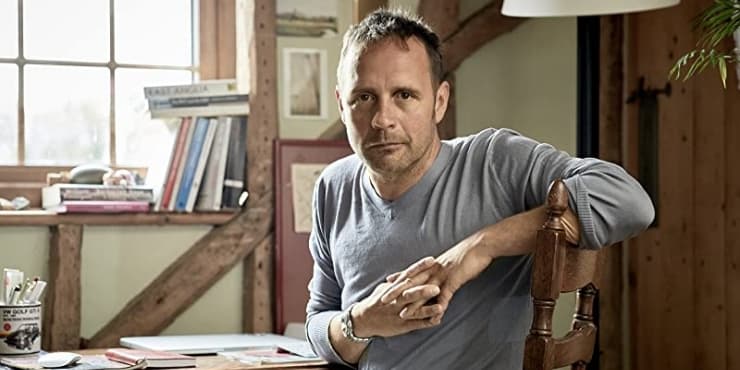 James Henry is the pen name for James Gurbutt, who has written four prequels to RD Wingfield's popular Detective Jack Frost series, including First Frost and Frost at Midnight.

His DI Nicholas Lowry series is set in Colchester in the 1980s, with the most recent addition being Whitethroat, published in 2020 by riverrun. You can find all of James's books on our catalogue.

James is one of the stars of this year's Slaughter in Southwold crime-writing festival. James will be joining us at Southwold Library on Saturday 18 June for an in-person author interview.

The Moomins. Their world was so much more immersive, than anything else around. I didn’t try writing until many decades after discovering the Hemulen, and I didn’t enjoy much of the time. It has always been a battle.

I do have a special desk, yes, though a lot of my writing – especially when stuck – was/is done on the train commuting to Liverpool St. No routine. It’s far easier not to write.

The biggest challenge of the Wingfield books was imagining Denton, the exact layout of which was known only to Wingfield. Frost himself, was an amalgam of Wingfield’s character and David Jason’s portrayal on television, so from the start he was not going to be identical (which with the best will in the world was not possible; an acceptable representation was the goal).

No, he’s not based on anyone… Lowry was difficult – after four Frost novels I wanted to escape Jack, and come up with someone the complete opposite, original, but of course that’s easier said than done, so I concentrated on the landscape and location – that at least, I knew (more than Denton, anyway) and Lowry could take shape gradually, which I hope works.

Thank you. I chose the eighties for several reasons, first because it was a formative decade for me: school / first job – child to adult. An editor told me it’s nostalgia. It’s not or wasn’t in my case. I was neither particular happy or sad. Everything rushes at you at once in teenage years. Second, I’d managed it with Frost, and felt comfortable in the past. Not worrying about technology, where we’re at with DNA and that sort of thing. My detectives worry about having change for the call box, not whether their mobile’ll die.

Whitethroat is set mainly in Colchester itself. Broadly, Blackwater is the coast, Yellowhammer is the countryside, Whitethroat the town. Whitethroat opens with a duel in the High Street. Lowry and Sparks are both feeling progress and change breathing down their necks. Where will it all end, are they past their prime?

Not yet, other than it is set in the winter of 1990 and opens on the Colne. Sorry. It changes…

A tough choice. With all three it depends on your mood. But I’d say Beethoven’s Piano Concerto No.3 as it encapsulates the sheer range and power of Beethoven – indeed music full stop. Still get a tingle.

Yes, I’m familiar with Suffolk and know parts well; Blaxhill, Wenhaston, and Southwold. Good for birding. Nothing more exciting than watching hobbies blast over the reedbeds, they should be there providing it’s warm enough by then!

I always say I have lived in Essex my entire life. That’s not entirely true; between 1977 and 1979 I was in Saudi Arabia. My dad worked on an oil refinery in Jeddah. We flew out on the day Elvis died – remember the pilot announced it on the runaway – and came back when “Are ‘Friends’ Electric” was number 1.