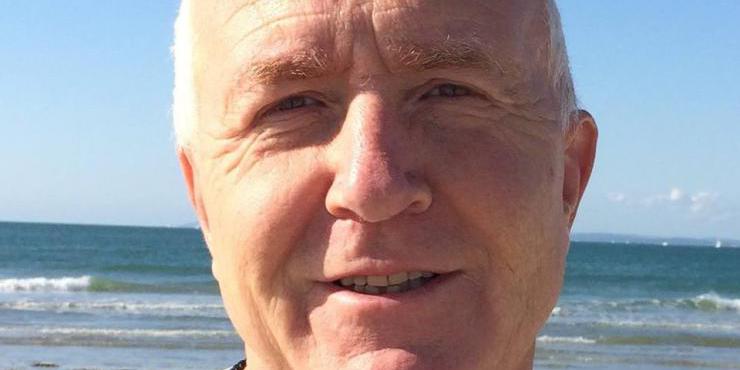 G.J. Minett is the author of three novels, The Hidden Legacy, Lie in Wait and Anything For Her. His latest novel The Syndicate is published on July 9th by Bonnier Zaffre and is also available from Suffolk Libraries.

Probably Richard Hannay in The Thirty-Nine Steps or Jim Hawkins in Treasure Island. Always dreamt of being adventurous like them although, to be honest, most adults would have put my behaviour on a par with Jennings and Derbyshire, or maybe William Brown.

First attempt at writing? I remember coming up with an adventure story when I was about eight, which bore more than a passing resemblance to a tv serial which was popular at the time, but felt the tug with a vengeance when I was praised by my junior school teacher for a piece of writing I did which included the word undulating. I used to look up five words a day and write them down in a little book. Usually used them in entirely the wrong context of course, but the praise certainly opened my eyes to new possibilities. We authors never change.

It was the dissertation for my MA in Creative Writing at the University of Chichester. We were asked to come up with an opening chapter that would grab the reader’s attention and at the time Mary Bell was seeking a court injunction, asking for her identity to be protected for the sake of her 14-year-old daughter, who knew nothing about her mother’s murder conviction as a young schoolgirl or her change of identity. The chapter won a national competition and became the Prologue for The Hidden Legacy.

Certainly. I’d describe it as a redemption novel. Jon Kavanagh is 63 and has lived an uneventful and anonymous life for the past 20 years, running a bookshop. This gentle existence is in marked contrast to the life he used to have in London where he was an enforcer for a major crime syndicate. It’s a life from which he managed to negotiate his release by threatening to release damaging evidence he’s been squirreling away if anyone comes after him. The truce agreement has held for twenty years but new management has taken over in London and his defection is now seen as a dangerous precedent which sets the wrong example to others who might be thinking of trying the same thing. The Syndicate knows where he is . . . and Kavanagh knows time is running out.

I always start with the main character. When I know her/him well enough to be quite clear what the achilles heel is, I then come up with a storyline to put that weakness under stress. Maybe because of this, I’ve always been a detailed planner. A lot of my friends who write have a definite preference for flying by the seat of their pants but I’d struggle to do that. I won’t write a word until I have a detailed breakdown, highlighting not only what each chapter will do to move the plot forward but also what aspect of the character it will reveal. I don’t think there’s a right way and a wrong way to go about producing a novel – it’s all a matter of what best suits the writer’s personality.

Best aspects? Definitely getting out there and travelling to talk to readers in book groups, libraries, bookshops. I was invited to give a talk at Downham Market a couple of years ago and the q and a session alone made it worth the while. Evenings such as that offer an invaluable insight into how the books are being received.

Worst? Editing can be a tough process, especially if it involves tearing out whole chapters or maybe even cutting altogether characters in whom so much time and emotion has been invested. The first instinct of most writers is to protest but that’s why we have editors who can maybe take a step back and see things in a wider perspective.

Yes . . . Catch-22. I read it in my teens and was fascinated by the twisted logic of the catch itself. By the time I went to university I was quite well versed in the art of taking any argument to its most ridiculous extreme. Even now I still catch myself slipping back into old habits from time to time.

In terms of blowing me away though, I still think Faulkner’s The Sound and the Fury is the most remarkable novel I’ve ever read. How any writer could have the audacity to come up with that structure, I’ll never know. I guess that’s what makes a Nobel Prize winner.

I’m currently reading Blackwood by Michael Farris Smith who, for me, is a leading light amongst a whole new wave of American writers blessed with so much talent. If you’ve never read any of his novels, I can recommend him without hesitation. Next will be Gutshot Straight by Lou Berney who is similarly gifted, and that will be followed by another Faulkner novel. I’m halfway through re-reading his entire collection for the fourth or fifth time alongside a terrific biography of him by Richard Gray.

I’ll refer you back to my earlier answer. I really enjoy getting out and meeting the reading public. I read something in the region of 60 novels a year so I class myself as a reader too and it’s always rewarding to recommend authors and books we’ve recently discovered. As for reviews, I know some authors don’t read them but I promise I read every one of them . . . even the negative ones. It’s possible to learn quite a bit from some of those although ratings with no explanation at all can be a little frustrating.

Two things. I was the first person from my entire family to go to university. I wouldn’t say the careers advice at my school was feeble but I chose Cambridge because I always supported them in the Boat Race. I wasn’t a bad sportsman when I was young and I’m not saying that played a part in my getting a place but within an hour of arriving there I’d been welcomed by the captains of the cricket and football teams. There’s no truth at all to the rumour that at my interview the Chaplain threw a rugby ball across the table to see if I’d catch it.

Also, in his later years, my dad’s eyesight was almost non-existent. When The Hidden Legacy first came out, my mother read the whole book to him and changed every single swear word to either flipping or blooming. She did so because swearing is unnecessary. How flipping ridiculous is that?