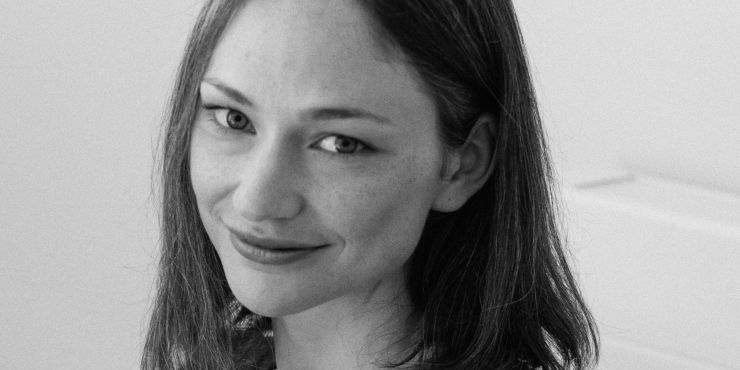 Francesca Haig is an author and academic. Her latest novel, The Cookbook of Common Prayer, is due to be published in June 2021 by Allen & Unwin.

Francesca’s post-apocalyptic Fire Sermon trilogy is published in more than 20 languages. The first novel, The Fire Sermon, was published in 2015, followed by The Map of Bones in 2016, and concluding with The Forever Ship in 2017.

Francesca grew up in Tasmania, gained her PhD from the University of Melbourne, and was a senior lecturer at the University of Chester, where she remains a Visiting Writing Fellow. Her poetry has been published in literary journals and anthologies in both Australia and England, and her first collection of poetry Bodies of Water was published in 2006. In 2010 she was awarded a Hawthornden Fellowship.

You can find The Cookbook of Common Prayer on the the Suffolk Libraries catalogue.

I was always an avid reader – my parents once left me behind after a dinner party because I’d sneaked off to read and didn’t even hear my family leaving! The first books I remember loving were the Little House series, by Laura Ingalls Wilder, and 101 Dalmations by Dodie Smith. When I grew a bit older, I’d love to say I was mainly reading highbrow classics, but the truth is that (like most Australian teenagers in the 90s) I was obsessed with the Tomorrow, When the War Began series, by John Marsden, about a group of teenagers forming a resistance army when Australia is invaded. But I was reading a lot of Jane Austen too – so fairly eclectic tastes! My obsession with reading went hand in hand with my love of writing, and I always knew I wanted to be a writer. I was extremely lucky to have bookish parents who fostered my love of reading and writing, and brilliant teachers who encouraged and challenged me.

In the trilogy, the world has been devasted by a nuclear war, and the resulting radiation means that, even hundreds of years later, all humans are born as twins. When one twin dies, so does the other. The intricacies of the world emerged along with the story as I wrote – but my focus was always on the characters and their relationships, rather than on the details of this imagined post-apocalyptic world. The core of the story, and the first part of the idea that came to me, was the twisted, co-dependent relationship of Cass and her twin Zach - not the sci-fi premise.

I find that each story dictates its own form and audience – I didn’t consciously think about writing differently for adult readers (and I’d never want to underestimate the readers of YA books, who are often very sophisticated and voracious readers!). Because of The Cookbook of Common Prayer’s focus on being a parent, and on the particular tragedy of losing a child, I guess I did always assume that it would principally connect with an older audience. But the beauty of fiction is that we can identify with experiences that are far beyond our own – so I really hope a wide range of readers will find something in the book. In fact, the narration alternates between five main narrators, one of whom is an eleven-year-old boy, so I hope it captures a range of voices and perspectives.

The blurb tells you a little about the plot:

When Gill and Gabe's elder son drowns overseas, they decide they must hide the truth from their desperately unwell teenaged daughter. But as Gill begins to send letters from her dead son to his sister, the increasingly elaborate lie threatens to prove more dangerous than the truth.

A novel about family, food, grief, and hope, this gripping, lyrical story moves between Tasmania and London, exploring the many ways that a family can break down - and the unexpected ways that it can be put back together.

That can sound a bit grim, but it’s really a novel about hope, rather than grief. This family finds itself in a tragic situation, but the real story is about how they find their way through their grief and back to one another. Because of the sadness in the story, I was very conscious of my responsibility, as an author, not to leave my readers in a place of despair. And hope has always been more interesting to me than despair, because it’s more complex.

I’ve almost finished my fifth novel now, and I’m still failing at the resolution that I make each time, which is to write more chronologically and not to just write the juicy bits first! I have a rough outline at the start, but each day at the desk, I find myself drawn to a particular scene – and I think you do have to let that enthusiasm lead you. But it does leave a messy job at the end of the first draft, when I then have to patch the whole thing together.

My next novel is (another!) change of genre – this time to historical fiction. It’s a retelling of the extraordinary lives of two real female pirates from the 1700s (Anne Bonny and Mary Read). I’ve loved immersing myself in research for the novel – but there are so many fascinating rabbit-holes to go down that the challenge is to know when to draw a line under the research, and get on with the writing…

In the last year, probably Mark Haddon’s The Porpoise – I just adored the risks that it took, and the opening chapter is a masterclass in suspense and understatement. Another contender is Days Without End by Sebastian Barry – such a light hand with history, and a brilliant narrative voice.

As for all-time favourite authors, some of the ones I keep returning too are Toni Morrison, Cormac McCarthy, Anne Michaels, Tana French, Nicole Krauss, Marlon James, and Robin Hobb.

I definitely knew that I needed a back-up plan, so before The Fire Sermon books were published I was an academic (teaching English Literature and Creative Writing), which I absolutely loved. If I weren’t lucky enough to write full-time, I’d gladly still be an academic – not many jobs give you the chance to spend each day thinking about, and talk about, literature. I still do some university teaching occasionally, as it’s such a joy to be with students. And I mentor young writers through the Writing Squad, which is a brilliant organisation that nurtures the best young writers from the North.

I think the thing that surprises most of my readers is that I’m generally a very cheerful person. With a PhD in Holocaust Literature, and four published novels on very dark topics, people are sometimes surprised to meet me and find I’m fairly (ok, irritatingly) chirpy.