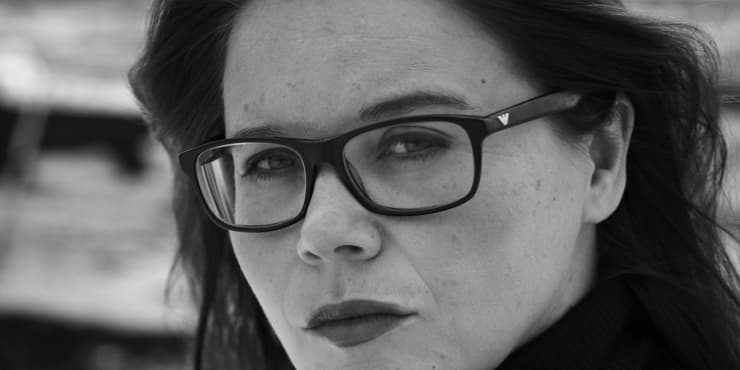 Rattle, her debut novel, was the subject of a huge international auction and has been translated into several languages. Its sequel, The Collector, was published in 2018. Her fourth novel, When I Was Ten, was an Irish Times top ten bestseller in April 2021. Fiona's latest novel, Into the Dark, was published in April 2022 by Macmillan and is available on our catalogue.

Fiona is one of our featured authors for Slaughter in Southwold, our annual crime-writing festival at Southwold Arts Centre. Fiona will be kicking off the festival on Saturday 18 June.

Growing up, my literary heroes were not writers, but the characters in their books: Anne Shirley (Anne of Green Gables by LM Montgomery), the Clock family (The Borrowers by Mary Norton), Josephine Leonides (Crooked House by Agatha Christie) and Jeanette (Oranges Are Not The Only Fruit by Jeanette Winterson).

I would often write short stories and poetry for my own pleasure as a teenager, but I didn’t write in a meaningful way until I was thirty-seven. It never occurred to me that I might make a living from my imagination, but after I left my job at the Daily Mirror, I applied for Faber’s Writing A Novel course, and began work on the book which became my debut, Rattle. I signed my first publishing deal a month before my fortieth birthday.

I enjoyed my job − I got to travel to exciting places and meet interesting people − but I was never intimidated or overawed by celebrity. I was more overwhelmed to meet stars of the literary firmament like Ian Rankin, Val McDermid and Lee Child at my first crime writing festival than I ever was by Hollywood A-listers. Being a journalist is a fertile training ground for a career as a crime author. In my days covering news, I reported on rail disasters, terrorist attacks and child abductions, and it’s impossible to cover these stories without them leaving their mark. In a practical sense, I was used to being edited and writing to deadline − important qualities when considering becoming a novelist. Newspaper stories and fiction are not so different as readers of both mediums care about the same things, the emotional heart of the story.

Take the children to school, make tea, go on Twitter, answer my emails, go back on Twitter, open my Work-In-Progress and write a few sentences, go back on Twitter. Repeat ad infinitum until it’s time for pick-up. I often get up early and work very late too. I’m a slow, considered writer and I don’t like to rush.

When Julianne Hillier arrives at Seawings, the luxurious seaside home of her best friend Piper Holden, the kettle is still warm and the mobile phones are charging on the worktop, but Piper, her husband Gray and their two teenage children have vanished without a trace. On the wall of 15-year-old Riva’s bedroom, written in blood, are three words: Make. Them. Stop. Troubled detective Saul Anguish and forensic linguist Dr Clover ‘Blue’ March are tasked with finding the missing family in this novel of revenge, greed, ambition and the true cost of friendship.

I’m ridiculously superstitious but I’m in thick of writing it at the moment. I’ve just sent a chunk off to my agent and editor, and I’m gnawing my fingernails while I wait for their feedback. I can tell you that DC Saul Anguish and Dr Clover March feature in this book too.

I grew up in the neighbouring county of Essex and still live there now, so I’m very familiar with Suffolk. It’s a beautiful place. My daughter and I recently spent a weekend together in Southwold. We walked along the beach, visited Southwold Pier and stayed in the glorious Swan hotel.

This is a tough question! I’m not an art aficionado but I remember being blown away the first time I came across the work of Salvador Dalí, specifically The Persistence of Memory. I later visited the Teatre-Museu Dalí in his home-town of Figueres which was a mind-bending experience.

I was standing in the school playground, waiting to collect my children, when a little boy playing hide-and-seek crouched behind me. Rattle had recently been published and I remember his mother saying to me, ‘Of all the parents in the playground to hide behind, he chose you.’ ‘What do you mean?’ I said. Her answer? ‘You write those books about abducting children, don’t you?’ I mean, I don’t actually abduct children! It’s all made up.

Can I have two? 1) Finish what you start: commit to an idea and don’t get seduced by all the other shiny ideas. 2) Back yourself because no-one else is going to.

I once played football against the England women’s national team. We lost 15-0.