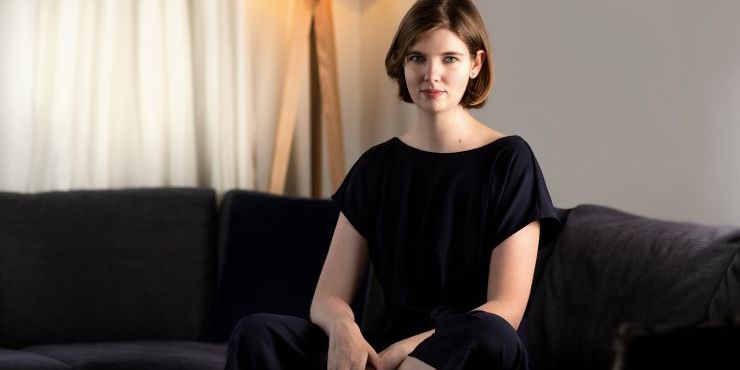 Elizabeth Macneal is a Scottish author and potter based in East London. Elizabeth's first novel The Doll Factory was a bestseller and was translated into 29 languages. It is set in 1850s London, and it is about a young woman who aspires to be an artist, and the man whose obsession may destroy her world forever.

Her second novel, Circus of wonders is about a girl who is kidnapped by a travelling circus, and who must find her voice in this dark and spectacular world.

Moving from the pleasure gardens of Victorian London to the battle-scarred plains of the Crimea, Circus of wonders is a story about power and ownership, fame and the threat of invisibility. It will be published in May 2021 by Picador and is also available through Suffolk Libraries.

I had so many literary heroes! I loved Anne Gilbert and Sara Crewe and Mary Lennox – all girls who had to navigate a major change in their lives. I think this has influenced both of my protagonists – Iris, who abandons her life in a dollmaker’s shop and becomes a model and artist; and Nell who is kidnapped and sold to a circus. So many children dream of being authors, largely because I think it taps into that childish preoccupation with fantasy and play and making up stories. I certainly felt this way – I spent hours shut in my room, scrawling stories and drawing my characters. I suppose I never really grew out of that.

They work brilliantly together – though I’ve definitely chosen two very anti-social careers! While I generally love writing, there are some days where I feel like I’m not getting anywhere or I’m forcing an idea. It’s then that I really enjoy pottery. At the end of an afternoon I can have made ten mugs and have something to show for my time, unlike writing which isn’t always so straightforward – for example, just before starting Circus of Wonders, I deleted an entire year’s worth of writing.

I also find that when my hands are repeat-throwing, my mind wanders and I end up coming up with ideas which I wouldn’t have considered if I’d just stayed sitting at my desk.

I tend to write in the mornings when I concentrate best, and then when my brain starts to slow down, I go to the studio and throw pottery.

It has been an incredible few years! My life has changed immeasurably, but the greatest joy is now being able to write full-time. I used to cram writing into the dark, early hours before my office job began. Now I can spend my days lost in the worlds of my characters, puzzling out sentences and plots. There are bad weeks and even bad months, of course, but every day I am glad to be able to sit at my desk and pursue the career I dreamed of for so many years.

That is the exact joy of research – constantly uncovering surprising nuggets and working out ways to incorporate them into the story. I could write a book on this alone, but here are a few of my favourites:

Of course! It’s about power and fame, greed and belonging. In 1860’s England, circus mania is sweeping the nation. But when Jasper Jupiter’s Circus of Wonders pitches its tent in a small coastal village, the life of one girl changes forever. Sold to the ringmaster because of the birthmarks that cover her body, it is the greatest betrayal of Nell’s life. But as she grows close to the other performers and her fame grows, she finds herself enchanted by the glittering freedom of the circus, and by her own role as the Queen of the Moon and Stars. Newspapers describe Nell as the eighth wonder of the world. Figurines are cast in her image, and crowds rush to watch her soar through the air. But who gets to tell Nell’s story? What happens when her fame threatens to eclipse that of the showman who bought her?

At the moment, my latest project largely seems to involve unpacking boxes and preparing for the arrival of my first baby (for some reason I decided it was a brilliant idea to move house, do up a house, launch a book, and have a baby, within the same three months). But I’ve got an idea that is niggling at me – a story about the construction of a Victorian cemetery, and I’m excited to begin it when I have a moment.

The Bass Rock by Evie Wyld. The book is an absolute masterpiece. Not only is it intricately and insightfully written, but gripping too. I’ve forced it into so many of my friends’ hands, and they’ve all adored it. It’s set in North Berwick in Scotland (where I spent a lot of time as a child), and spans three time periods. It’s about hope and survival and the impact and legacy of male violence. Read it!