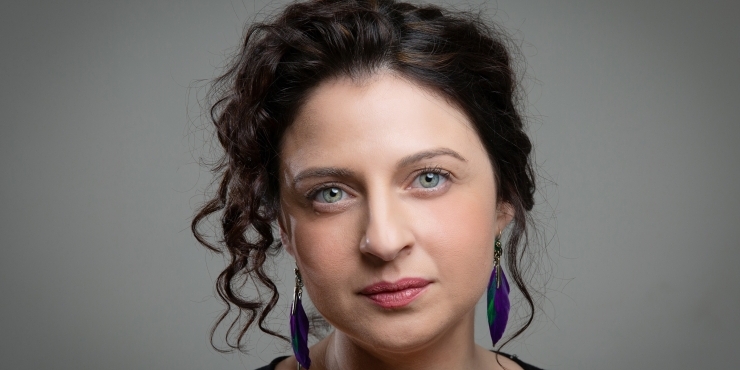 Christy Lefteri was born in 1980 to refugees who escaped Cyprus following the partition of 1974. Raised in London, she released her first novel, A Watermelon, a Fish and a Bible, in 2010, and her second, The Beekeeper of Aleppo, in 2019. The latter became a Sunday Times bestseller and the winner of the 2020 Aspen Words Literary Prize.

Christy's latest novel Songbirds will be published by Manilla on 8 July. You can find all of Christy's books on the Suffolk Libraries catalogue.

While I was volunteering at the women and children’s refugee centre in Athens, I kept having an image in my mind of a man walking into a crumbling home holding a pomegranate which he had found on the streets. He offered the fruit to his wife as a gift. In this image his wife was blind and they had lost their son. When I went back to the UK, I decided to write the scene and it grew and developed from there. At first it was written in third person, but when I started to write some of the asylum interview sections Nuri’s voice really came to life and I knew that I needed to go back and change the narrative from third to first person. As soon as I found his voice it all started to come together.

I’m not sure if there is anything I nearly left out, but there is something I definitely left out and those were chapters that I had written from Afra’s perspective. I decided that I didn’t want to include them, that I wanted Afra’s strength to be revealed in the story slowly and subtly. I like it that when people read it they think at first that Nuri is the stronger of the two but later discover that it is in fact Afra with her deep, quiet strength.

No matter what story I’m writing, whatever the circumstances are, it is the bond and the love between people, between friends, between a parent and child, a husband and a wife, that is the real heart of the story.

The story is about a domestic worker called Nisha who has crossed oceans to give her child a future. By day she cares for Petra's daughter; at night she mothers her own little girl by the light of a phone. Nisha's lover, Yiannis, is a poacher, hunting the tiny songbirds on their way to Africa each winter. His dreams of a new life, and of marrying Nisha, are shattered when she vanishes. No one cares about the disappearance of a domestic worker, except Petra and Yiannis. As they set out to search for her, they realise how little they know about Nisha. What they uncover will change them all.

Songbirds was inspired by real life events where five domestic workers and two children went missing in Cyprus and nobody searched for them because they were foreign. The Plice specifically refused to launch an investigation and said that they were not interested in concerning themselves with the lives of foreign maids.

While I was on tour for Beekeeper I was often asked a very important question which got me thinking. “How can we get people to understand that refugees are not like migrants, that they have no choice?” what really saddened me about the question was our obvious need to categorise, label and put people into boxes. I knew from the stories that I had heard that people make journeys for all sorts of reasons. Sometimes they are frightened, sometimes they have no other choice, but sometimes they are searching for a better life. Can we condemn people for wanting a better life? Don’t we all? What does wanting a better life mean to one person and another? It was these thoughts and these questions which compelled me to want explore further and eventually to write about migrants.

I’m interested in going to Greece to research the wild fires that happened in Mati a few years ago. I’m interested in learning more about the effects of climate change on communities and families.

No I can’t really say that there is. However, I would say that every book that I have read has changed me in some small way.

I’m on a judging panel so I am currently reading the books on the longlist. After that I’d like to finish Norwegian Wood by Murakami - I’m about a quarter of the way through and I can’t wait to get back to it.

I have a Havanese dog called Alfie who is the funniest little thing I’ve ever met.