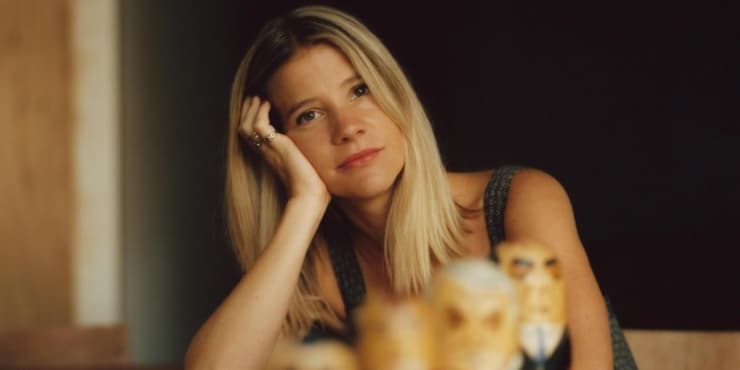 Charlotte Philby worked for the Independent for eight years as a columnist, editor and reporter, and was shortlisted for the Cudlipp Prize for her investigative journalism at the 2013 Press Awards. A former contributing editor and feature writer at Marie Claire, she has written for the New Statesman, Elle, Telegraph, Guardian and Sunday Times, been interviewed on BBC Radio 3’s Free Thinking, BBC Radio 4’s Loose Ends and presented documentaries for the BBC World Service and The One Show.

Charlotte is the granddaughter of Britain’s most infamous communist double-agent, the elusive ‘third man’ in the Cambridge spy ring. Edith and Kim is her fourth novel. It is published by The Borough Press on March 31st. You can find Edith and Kim and all of Charlotte's other titles on our catalogue.

My maternal grandmother was the person I still look up to most. She had a tragic life in lots of ways - she grew up in Soho in poverty, the daughter of immigrants and lost two siblings in childhood, which understandably drove her mother mad. Nevertheless she had a wicked laugh and a glorious sense of fun. Joan was a midwife in the war, had three children, lots of friends and animals, and launched her own travel-guide company in her sixties - I went on a couple when I was young and The Sound of Music soundtrack was always on loop on the music system and there were a lot of food-based pit-stops! The last thing she did before dying was to suck champagne from a sponge; that tells you everything you need to know.

It's variable. Generally I work best in the morning, before I've spoken to anyone but with three children that isn't always possible! We've had a lot of upheaval, like everyone, in the past couple of years and in September 2020 moved from London to Bristol whilst homeschooling which has meant snatching time here and there but I do find a lot of the work is done subconsciously - writing is a brilliant escape from reality. Now I am very lucky to finally have my own writing shed and I am happily building my worlds in a private space that allows me to delineate more between home and work life.

I don't feel like it was a conscious decision; rather a woman who has always been surrounded by strong confident women who tend to run the show, it made sense for these characters to take centre stage in my books. It's also interesting to place women in situations that are often reserved for men, and see how everything shifts. As a storyteller, it's an enjoyable - and challenging - way of tilting the lens to look at a genre I enjoy, in a new way.

We used to visit my grandfather in Moscow every year from my birth in 1983 until his death in 1988. It's hard to know where my own memories end and those I've had projected onto me begin. My own recollections are largely of his apartment, Kim in a white vest and braces, playing chess with my father. There was always music and laughter and a bottle or three on the go. I also remember clearly the muskets and animal hides hanging on the wall above the sofa where I would sit and play.

My desire to understand Kim - and the impact of his life on my father, John, Kim's eldest son - was partly what led me to return to Moscow in 2010, following in my grandfather's footsteps in order to try to understand the man behind the many masks. But the more I uncovered on that trip, the more questions arose. I'm fascinated in how stories can belong to many people in different ways. Each historian chooses to pursue their own version of history - as they say, all history is fiction - but I'm cynical about how much we can ever hope to know about the Cambridge Spies and I've consciously made my book a novel, informed by all that I've read - not least Kim's private letters from Moscow to London, and the countless files held on Edith Tudor-Hart, and later released to the National Archive in Kew. I think people often say more in what they don't say, or when they're not trying to explain themselves.

I think it is, in a way, though I still feel indebted to Edith, and a great sense of duty. Luckily, there are some excellent sources. The SIS files held on her run from 1930, when she came to London from Vienna to attend a Communist march (she had been in the city earlier, studying under Maria Montessori), following her movements from the Bauhaus where she trained as a photographer back to London where she worked as a spy, and introduced my grandfather to his future Soviet handler, Arnold Deutsch, in Regent's Park in 1934. She was also an active member of the party and a single mother to a schizophrenic son. Kim famously said he was two people, a private person and a political one and if forced to choose the political came first. But to me, it seems Edith didn't see this as a choice. She was both, and the impact of that on her life was great.

Edith and Kim is a fictional reimagining of the lives of my grandfather, the double agent Kim Philby, and Edith Tudor-Hart, nee Suschitzky, who recruited him to the communist cause. Edith met Kim in Vienna in 1933, whilst he was living as a lodger with the family of her best friend, Litzi Friedmann, who he later married in order to help her escape Austria.

It's a literary historical novel described by WIlliam Boyd as 'Completely fascinating. A sophisticated and brilliantly constructed fictional retelling of a crucial relationship in 20th century espionage history. A tremendous achievement', and by Erin Kelly as 'combining the authenticity of your favourite true crime podcast, the intrigue of a spy novel and the page-turning grip of a psychological thriller - all wrapped up in beautiful, evocative prose that transports the reader to shady corners of 1930s London and Vienna. Her best book yet'. I'm sorry if this is cheating but it's almost impossible to describe one's own work!

I'm working on another spy story with a twist; this time set in the mid-2000s - I'm still in the early stages so can't give too much away but I'm very much enjoying the process!

This is impossible but I'm going to go for the His Dark Materials trilogy as it's the only book that myself and my children - aged six to eleven - all love, almost equally. The books work on so many levels and Pullman's world-building is second to none. I have such admiration for people who can write in a way that appeals to different ages, mean different things to different readers, and challenge ideas without being insufferable or dogmatic.

I once interviewed Lee Child, who said: 'The best piece of advice is to ignore my advice'. It sounds flippant, but I like the sentiment; sometimes I think it's best to follow your gut.

I was in a brilliant choir as a child - the Finchley Children's Music Group - and very fortunately got to perform in shows at the National Theatre and English National Opera. The highlights were screaming at the top of my lungs on stage as a rabbit in Wind in the Willows at the National Theatre, and being electrocuted alongside Willard White at the end of a mammoth production of Khovanshchina. (Or at least pretending to be).