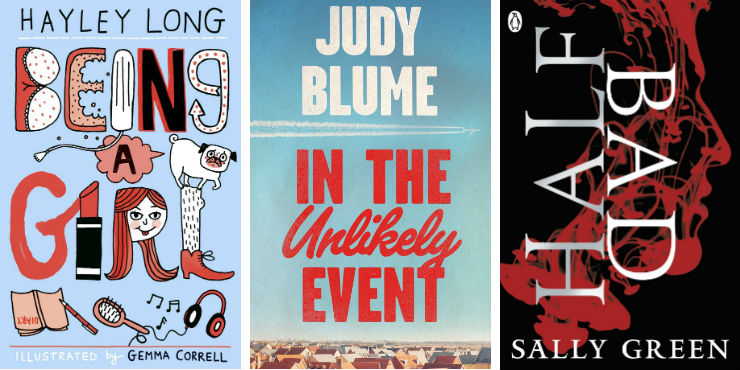 Being a girl by Hayley Long

Guide to surviving female puberty and by an East Anglian author and illustrator to boot. The panel on Being a Girl: Feminism and YA today, including Malorie Blackman, will discuss why feminist themes matter in YA literature. Available to borrow from our libraries as an eBook.

In the unlikely event by Judy Blume

New release from Judy Blume, about a 1950s teenager dealing with the aftermath of successive plane crashes in her town. The classic teen author will be at the talk Judy Blume & Patrick Ness in conversation, discussing her several decades-spanning career.

Half bad by Sally Green

Fantasy novel in which a 16-year-old boy, Nathan, battles to survive among a world of witches. We also stock the recent sequel, Half Wild. Sally Green will discuss inspiration for sci-fi fiction with a variety of authors at Between fantasy and reality.

This Book is Gay by Juno Dawson (formerly James Dawson)

Entertaining and revealing look at growing up LGBT, from a variety of perspectives. The panel of LGBT in YA, including Juno Dawson (formerly James Dawson), will examine the role of lesbian, gay, bisexual and transgender characters in YA literature.

Witty take on the subject of teen pregnancy. We also stock Non Pratt’s latest book, Remix. She will discuss the working relationship between authors and editors in the workshop, Author and Editor: A J Grainger & Non Pratt.