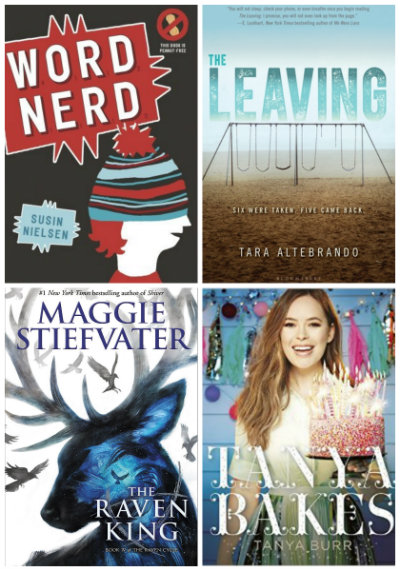 Tim Collins - The Vlogger Diaries: confessions of an internet sensation

This well illustrated diary is a truly laugh-out-loud read-in-one-sitting book, with a good subtext about the importance of friendship. The blurb says “Discover the hilarious story of one teenage girl’s journey from geeky nobody to online superstar - sort of.” A good present for cheering up a gloomy day over Christmas.

Sally Gardener - The Door That Led To Where

A really exciting time-slip novel set in contemporary and Victorian London. It’s a crime novel and tackles big issues about purpose and respect too. A great read.

A brilliant thriller about “heritage crime” in which people are imprisoned for the so-called crimes against society committed by their parents. It’s real edge of the seat stuff, with a lot to think about too. It should appeal to both sexes, and to parents who want a gripping read over the holiday.

Simon Mayo’s series of books about Itch are great reads too.

This latest book from Susan Nielsen is an excellent read about a boy who never quite fits in, and his life with an over-protective mother. Ambrose, home-schooled in a loose kind of a way after being bullied at school, develops an unlikely friendship which changes his life.

“As Penny starts the school year she’s ready to face the world - alone. Noah has gone off the radar after ending his world tour early and no one, including Penny, knows where he is. So when she accepts Megan’s invitation to visit her performing arts school it seems like an opportunity to make some new friends. Helping everyone else seems to be the right remedy. Elliot needs her friendship more than ever, and she meets Posey - struggling with stage fright and in need of support. But is charming Scottish boy Callum the right kind of distraction? And can Penny truly move on when Noah’s shadow seems to haunt her round every corner?”

We expect this book, the second in internet sensation Zoella’s Girl Online series, is on a lot of Christmas present lists this year!

“Things haven’t been easy for Jack recently - life as a teenager has its ups and downs. But when he meets a new group of friends, who are every bit as geek as they are chic, his luck seems to be changing. Each of the group is talented and when they pool together to create Generation Next, an incredible new kind of social media platform, it’s clear that they’re on to something special. What if your Instagram account grew by hundreds of thousands of followers overnight, and big companies were fighting each other to offer you photoshoots? When GenNext suddenly goes viral, Jack and his friends are thrust into a crazy world of fame which is as terrifying as it is awesome”

One of the best YA titles of the year, this thriller is set in a small town in America, where children missing for 11 years have re-appeared. It’s compulsive reading and would be a great gift for Christmas.

Claire Furniss - How Not To Disappear

Hattie’s life changes forever when she meets the great aunt she never knew she had in this wonderful bittersweet story about self-discovery, memories and cross-generational friendship. We can also recommend Claire Furniss’ first book, The Year of the Rat which was another emotional rollercoaster of a read.

Some kids on work-experience placements in London discover that the “brand-new, delicious and wildly popular energy drink LIQUIDATOR!”, about to be launched by a multi-national company “For those who wanna win!” is unsafe and only suitable for those who want to die. Another thrilling read.

The third title in the Rock War series about corruption surrounding a reality music show is as exciting as the first 2. It can be read alone, but better still give it along with Rock War and Boot Camp for a truly great Christmas present.

“All her life, Blue has been warned that she will cause her true love’s death. She doesn’t believe in true love and never thought this would be a problem, but as her life becomes caught up in the strange and sinister world of the Raven Boys, she’s not so sure any more.”

This, the fourth and final title in the popular fantasy series Raven Cycle, has had rave reviews.

> "Following the phenomenally successful Love, Tanya, Tanya Burr is back with her very first cookbook. In Tanya Bakes, she shares her passion for baking along with all her favourite recipes. As well as cakes and bakes, readers will love Tanya's delicious and simple puddings, loaves and pastries. From everyday staple bakes to sweet treats for special occasions, Tanya's got the perfect recipe, every time."

This very popular vlogger has co-written his life story with his mum. > "Let me tell you now that 98% of it is total lies. Actually, I'm pretty sure this book is illegal. So if you've bought it, you've basically supported a criminal. How does that feel? I think she's getting me back for my first day in this world when I mayyy have tried to kill her. She won't not be able to mention that ... You might also find out about my first day at school, why my head is so massive, how I've always been a hit with the ladies and other things like that. You know, important stuff." It’s just bound to be a popular present this Christmas.