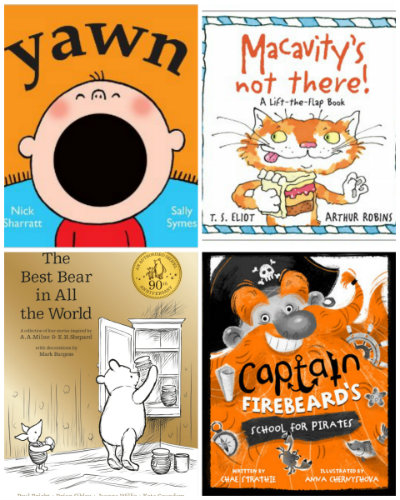 This rhyming board book, first published in 2012, is more or less guaranteed to help you (and your child?) nod off to sleep. Each page has a large die-cast hole, it’s very sturdy and it should last almost to next Christmas before you need to buy another copy. Warning: the yawn is infectious.

My Best Ever Pop-up Build Book

If you’re looking for a book for the toddler who loves watching diggers and cement mixers, this is the one for you. It is well produced, with large pop up photos of a wide range of vehicles and it has a sound button too. Good old DK!

The Queen and her corgi swoop around the world with Father Christmas in search of presents for her great grandchildren in this gorgeous new Steve Antony picture book. The palette is a seasonal green with a touch of red, the cover shines, the sleigh soars over iconic landmarks and the endpapers are populated with elves. It is a beautiful object and funny too, just perfect for Christmas.

Celebrate the power of reading with this gentle tale of a little knight who tames a dragon with a story.

T. S. Eliot and Arthur Robins - Macavity's Not There!

Faber have been republishing Old Possum in picture book format for a couple of years now, but whoever thought of producing Macavity in a lift-the-flap format (like Spot) was inspired. It’s the most perfect book to share with very young children, and would make a super present.

One of our favourite picture books of 2016, this hilarious rhyme about a frog who is fed up with being sat on by dogs provides excellent phonics practice as well as amusement. Every home should have a copy. And of the brilliant prequel Oi Frog, about a frog who has had enough of sitting on logs!

Do you too have a Very Little Sleeping Beauty who isn’t tired enough to go to sleep? Share this book and laugh together before bed.

David Melling - D Is For Duck!

This is the cleverest alphabet book we have seen for years. It tells the story of Duck, a magician who conjures up an A–Z of animals each of whom adds to the narrative. Making an alphabet book funny and interesting takes some doing, but then it was written by the talented creator of Hugless Douglas.

This book about Isadora, who is half fairy and half vampire, would make a super gift for un-girly children who have just started to read by themselves. There are several other Isadora titles to collect.

Walking the plank, climbing to the crow’s nest and other piratical skills, all wrapped up in a jolly adventure with alternating pages of text and illustrations. Catnip for some children we know.

Sarah Baker - Through The Mirror Door

Set in a crumbling house in France, this is a compelling, atmospheric time-slip story about a recently orphaned girl who slips 100 years away from her horrible cousins, into a room where a boy lies ill. A really good read, it has a thrilling plot and a pleasing ending.

Set in an invented Victorian era where travelling by airships was commonplace and where servants were often automaton, Cogheart is set to become a classic. With courageous protagonists struggling against powerful villains and a plot full of twists and turns, it is gripping to the very end.

The sash on the cover describes this book as “a stunning adventure of danger and daring” and it really is a tour de force of a children’s novel, gathering plaudits from many other writers. It would make a brilliant family read for the Christmas holiday and a super present for any 8–12 year-old.

Pete Johnson - How To Update Your Parents

The hilarious diary of Louis (aka Louis-the-Laugh) whose parents ban all screens in an attempt to reconnect as a family, and yes, that’s all screens, including their own. So that’s no TV, no tablets, no laptops, no PCs, and worst of all no mobiles, and I leave you to imagine the sort of reconnecting they all do. Louis’s best friend Maddy is so smart, she trained her parents to ignore her in Pete Johnson’s first How to book, and in How to Update, she is more or less in charge of strategy planning.

Pete Johnson is a master of comedy. It’s impossible to read this book without laughing out loud, so I would recommend reading it by yourself if you don’t want a pillow thrown at your head. Or better still, ban all screens for the afternoon and read it out loud to all the family.

This is the first title in a riotously funny new series about King Edwin, who tries to rule his own kingdom (there’s a map and everything). We can’t wait for the next episode due out in February, King Flashypants and the Creature from Crong. The illustrations are brilliant too.

The first title of a super new series about Dotty and her little dog, who go around finding mysteries to solve together. A perfect present for children who can read by themselves, but still prefer their pages lightened with illustrations.

The Best Bear In All The World

Subtitled “A collection of stories inspired by A.A. Milne and E.H. Shepard”, this Winnie the Pooh-esque sequel is a beautiful and captivating celebration of his 90th. Mark Burgess’s illustrations, inspired by Shepard, are sheer delight, full of “warmth and wit”.

Each of the seasonal stories, by 4 of our best writers, read like a dream. For example, Jeanne Willis’s Spring story “in which Eeyore suspects Another Donkey is after his thistles”, perfectly captures Eeyore’s gloomy paranoia and Pooh’s cheerfulness, and Kate Saunders’s Summer story “in which Pooh dreams of the Sauce of the Nile” has hilarious and predictable consequences. If ever a book deserved to be bought for Christmas…

Katie Daynes and Marta Alvarez Miguens - What Is Poo?

This little Usborne lift-the-flap book appears to be aimed at babies because of the board book format, but I would hazard a guess that it will interest both girls and boys, and the adults who bought it in the first place.

“How do bees communicate? What does a beekeeper do? Did you know that Napoleon loved bees? Who survived being stung by 2,443 bees? This book answers all these questions and many more, tracking the history of bees from the time of the dinosaurs to their current plight.”

Filled with amazing illustrations, this is 37cm of beautiful and fascinating bookishness. It’s a gorgeous object, an heirloom in the making, and a great idea for a Christmas present.