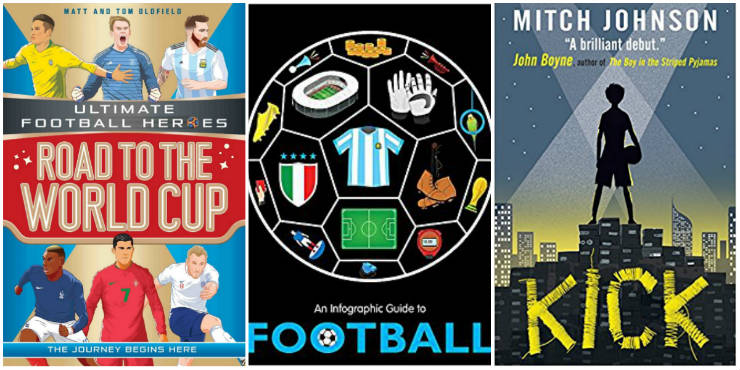 The best-selling Football School series from award-winning science and sports writers are funny and full of fascinating information. We’re really looking forward to the next book in the series, Where Football Explains the World.

“Budi’s going to play for the greatest team on earth, instead of sweating over each stitch he sews, each football boot he makes. But one unlucky kick brings Budi’s world crashing down. Now he owes the Dragon, the most dangerous man in Jakarta. Soon it isn’t only Budi’s dreams at stake, but his life.”

This critically acclaimed debut by a Norwich bookseller has been shortlisted for the Branford Boase Award 2018.

Barry Loser: is the best at football NOT!, by Jim Smith

“Everyone at Barry’s school has gone football crazy, but Barry gets thrown out of the team (the Mogden Maniacs) for being completely rubbish. Then it turns out that his best friend Bunky is a super striker - so Barry becomes his manager. The cup final match is approaching and Bunky’s getting carried away with his football fame - can Barry keep his head in the game?”

From the Playground to the Pitch: Messi, Neymar, Ronaldo and Kane, by Matt & Tom Oldfield

Find out about these star players’ journeys to the top.

Road to the World Cup: the journey begins here, by Matt & Tom Oldfield

“Live the journeys of six football heroes as they begin down the road to World Cup glory. Learn how star players Harry Kane, Lionel Messi, Cristiano Ronaldo, Neymar, Manuel Neuer and Paul Pogba, stepped up for their national sides, and brought them through qualification - ready to go head to head for the 2018 World Cup.”

Atlas of Football: discover the world of the beautiful game, by Clive Gifford & Tracy Worrall

“Football is enjoyed in every nation of the world by millions and millions of different people. This unbelievable round-the-world adventure is a celebration of the beautiful game that will take you through all of the planet’s continents. Discover fascinating facts and stats - from record-breaking goals to famous football mascots - and learn about the funny and extraordinary moments that make football such a beautiful game.”

50 Things You Should Know about Football, by Aidan Radnedge

“A comprehensive guide to football, from its origins and rules to the top leagues, clubs and of course the international competitions. Photographs of the top players, stadiums and managers are accompanied by infographics and up-to-date stats.”

“The perfect guide for any football fan who wants to know everything about the ‘beautiful game’ - from World Cup winners to football skills and techniques.”

The Infographic Guide to Football, by Corinne Lucas

“Football is the most popular sport in the world, and this infographic guide is the perfect way to take your love of the sport beyond the pitch. Whether you’re fascinated by goal stats, intrigued by the history or want to know more about some lesser-known competitions worldwide, it’s all within this one packed book.

“Using vivid colours, graphic visuals and bold designs, this guide brings football’s facts, history and teams to life with a modern and engaging approach to information.”

“In the summer of 2018, the entire planet will be glued to its screens as Russia hosts the greatest show on Earth: the FIFA World Cup. As the home of global football fan culture, Copa90 will be there every step of the way to bring the true story of Russia 2018 to its huge social media following. Football fans of all ages can be one step ahead of the game with this comprehensive guide to the planet’s biggest tournament.”

“It’s meant to be a stress-free holiday in London, but suddenly Seth and Nadiya will need all their skills as Defenders. Ghostly activity is threatening a Premier League football club as they build their new stadium on the site of Roman ruins. One worker has already met a grisly death, and many other lives are now in danger. The horror of modern injustice seems to have woken the spirits of the past, so what can the Defenders do to change things?”

The first in the Defenders paranormal mystery series about a pair of football-mad friends which gets progressively darker as the books go on.

“Jake dreams of becoming a professional footballer, but he’s worried about his height. On the day of his trial Jake is quick on the ball and scores - he’s made it! Jake can’t wait to pull on his shirt and join the team, but someone at the club wants to make his life difficult. Can Jake face up to the bullies and become man of the match again?”

The first in the Football Academy series, which includes some super-readable Barrington Stoke versions for readers with dyslexia and visual stress.

Frankie vs. the Pirate Pillages, by Frank Lampard

The first in the Frankie’s Magic Football series from the football manager and former midfielder.

Billy the Kid, by Michael Morpurgo

“Billy the Kid is 80 today, and looks back over his life. His adventures include going off to war, living rough as a tramp, and best of all, being picked to play football for Chelsea.”