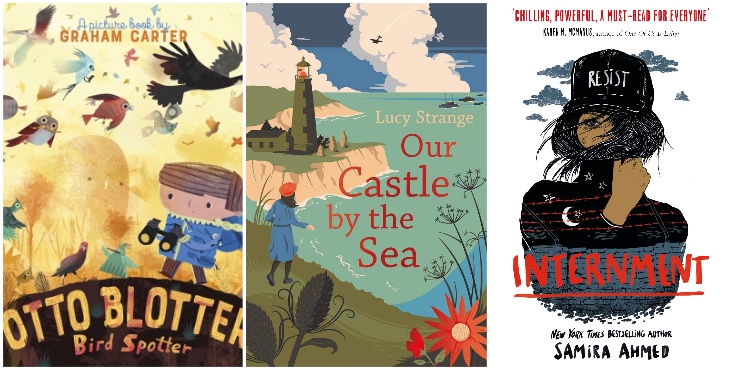 The Waterstones Children’s Book Prize champions the finest new talent in children’s writing and illustration. As ever, their booksellers have picked some brilliant books for children of all ages, so why give them a read?

“Rocket’s going to be the greatest astronaut, star-catcher space-traveller that has ever lived! But first, she needs to convince her big brother Jamal to stop looking down at his phone and start looking up at the stars.

“Bursting with energy and passion about space and the natural world, this heart-warming picture book will reignite your desire to turn off those screens and switch on to the outside world.”

Once Upon a Unicorn Horn, by Beatrice Blue

“Do you know how unicorns got their horns? It all began once upon a magic forest, when a little girl called June discovered tiny horses learning how to fly in her garden. But one of the poor horses couldn’t fly at all! So, with the help of her parents, June thought of a very sweet and very delicious way to make her new friend happy. I wonder what it could have been.”

“The Blotter family are famous bird spotters, who stay in their hide all day. All except for Otto - he’d rather go out and have big adventures. When he follows the biggest footprints he’s ever seen, he finds an extraordinary baby bird all on its own. Otto’s new friend soon reveals a very special ability: camouflage!

“But the bird keeps growing and growing, and Otto begins to suspect it may have a family after all - perhaps the time has come to take him home? Keen-eyed readers may spot the bird’s giant family hidden on the pages, if they’re good enough bird spotters!”

One Fox: a counting book thriller, by Kate Read

“One famished fox with two sly eyes is on the prowl - three plump hens had better watch out.

“The rich, close-up illustrations take the reader to the heart of the drama in this exciting story set in a moonlit farmyard. With something different to count in every picture, learning numbers from one to ten has never been so much fun, while the story will keep everyone gripped to the last, hugely satisfying page.”

Me and My Sister, by Rose Robbins

“This appealing brother and sister duo spend a lot of their day together, eating meals, going to school and playing. But life with an autistic sibling is not always easy. Through the eyes of the brother, we find out how they are both very different, but also very similar in other ways, and come what may they have lots of fun together and love each other just the same.

“Facts and descriptions provide insight into a curated collection of birds and animals - some endangered and some less so - told from the perspective of a detail-obsessed illustrator. Fun to read together or independently, let the secrets of the animals on our planet come to life in vibrant detail.”

The Middler, by Kirsty Applebaum

“Eleven-year-old Maggie lives in Fennis Wick, enclosed and protected from the outside world by a boundary, beyond which the Quiet War rages and the dirty, dangerous wanderers roam. Her brother Jed is an eldest, revered and special. A hero. Her younger brother is Trig - everyone loves Trig. But Maggie’s just a middler; invisible and left behind. Then, one hot September day, she meets Una, a hungry wanderer girl in need of help, and everything Maggie has ever known gets turned on its head.

“Narrated expertly and often hilariously by Maggie, we experience the trials and frustrations of being the forgotten middle child, the child with no voice, even in her own family.”

Charlie Changes into a Chicken, by Sam Copeland & Sarah Horne

“Charlie McGuffin tries to be an optimist, but in reality he’s a bit of a worrier. Some of the things Charlie is worried about: his brother (who is in hospital); their very panicked parents; unwanted attention from the school bully; the fact that he’s started turning into animals!

“Even though every kid wants a superhero power, Charlie isn’t keen on turning into a pigeon in the middle of the school play. But what happens if he does?”

The Deepest Breath, by Meg Grehan

“Stevie is eleven and loves reading and sea-creatures. She lives with her mum, and she’s been best friends with Andrew since forever. Stevie’s mum teases her that someday they’ll get married, but Stevie knows that won’t ever happen. There’s a girl at school that she likes more. A lot more. Actually, she’s a bit confused about how much she likes her. It’s nothing like the way she likes Andrew. It makes her fizz inside. That’s a new feeling, one she doesn’t understand.

“Stevie needs to find out if girls can like girls - love them, even - but it’s hard to get any information, and she’s too shy to ask out loud about it. But maybe she can find an answer in a book. With the help of a librarian, Stevie finds stories of girls loving girls, and builds up her courage to share the truth with her mum.”

“Summer in London is hot, the hottest on record, and there’s been a murder in THE TRI: the high-rise home to resident know-it-alls, Nik and Norva. Who better to solve the case? Armed with curiosity, home-turf knowledge and unlimited time - until the end of the summer holidays anyway.”

Our Castle by the Sea, by Lucy Strange

“England is at war. Growing up in a lighthouse, Pet’s world has been one of storms, secret tunnels and stories about sea monsters. But now the clifftops are a terrifying battleground, and her family is torn apart.

“This is the story of a girl who is small, afraid and unnoticed. A girl who freezes with fear at the enemy planes ripping through the skies overhead. A girl who is somehow destined to become part of the strange, ancient legend of the Daughters of Stone.”

A Good Girl’s Guide to Murder, by Holly Johnson

“Five years ago, schoolgirl Andie Bell was murdered by Sal Singh. The police know he did it. Everyone in town knows he did it. But having grown up in the same small town that was consumed by the crime, Pippa Fitz-Amobi isn’t so sure.

“When she chooses the case as the topic for her final project, she starts to uncover secrets that someone in town desperately wants to stay hidden. And if the real killer is still out there, how far will they go to keep Pip from the truth?”

“Life in Bearmouth will never change - at least, that’s what people say. They work hard to bring wealth to the Master, toiling in dark mines and brutal conditions for six long days each week.

“When young friends Newt and Devlin start to question the system, they set in motion a chain of events that could destroy their entire world. But freedom is worth fighting for.”

“In a horrifying ‘fifteen minutes in the future’ United States, seventeen-year-old Layla Amin is forced into an internment camp for Muslim-Americans along with her parents. With the help of newly-made friends also trapped within the camp, her boyfriend on the outside, and an unexpected alliance, Layla begins a journey to fight for freedom, leading a revolution against the internment camp’s Director and his guards.”

I Will Not Be Erased: our stories about growing up as people of colour, by gal-dem

“gal-dem are an award-winning magazine and creative collective of young women of colour, described by the Guardian as ‘bubbling with energy, ideas and talent’. In this thought-provoking collection of fourteen essays, their writers take raw material from their teenage years - diaries, poems and chat histories - and explore growing up. Straight-talking, funny and insightful, the essays tackle important subjects including race, gender, mental health and activism, making this essential reading for any young person.”

Jemima Small Versus the Universe, by Tamsin Winter

“Jemima Small finds it hard to measure up. Especially because she’s the very opposite of her name. And being forced to join a healthy eating group at school means no one will let her forget that. But if there’s one big thing she has going for her it’s her attitude - and she’s determined to prove that Jemima Small is a Big Deal.”

“How can I hold myself together, when everything around me is falling apart?

“Neena’s always been a good girl - great grades, parent-approved friends and absolutely no boyfriends. But ever since her brother Akash left her, she’s been slowly falling apart - and uncovering a new version of herself who is freer, but altogether more dangerous.

“As her wild behaviour spirals more and more out of control, Neena’s grip on her sanity begins to weaken too. And when her parents announce not one but two life-changing bombshells, she finally reaches breaking point. But as Neena is about to discover, when your life falls apart, only love can piece you back together.”