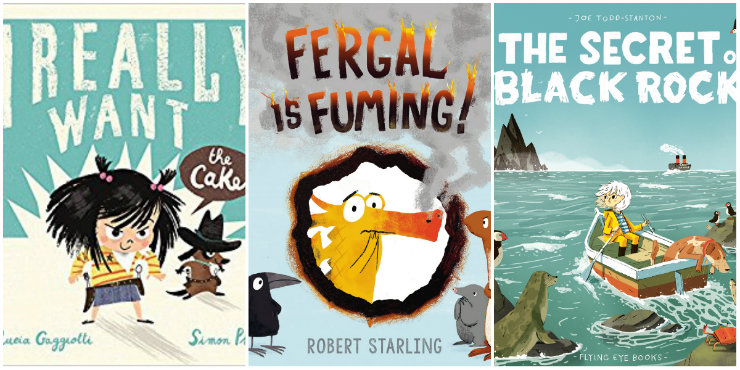 I Really Want the Cake!, by Simon Philip & Lucia Gaggiotti

“How do you resist the most amazing cake ever? Especially when your mum has left a note saying you must not eat the cake?”

“When a polar bear arrives unexpectedly in the woods, the animals fear and avoid him, suspecting him to be dangerous - and his habit of collecting leaves only adds to their distrust. Then one day, they watch as he attempts to fly over the water with wings made of colourful leaves, just trying to go home. Maybe he needs some help?”

“Max has a key and a box of midnight blue. When he turns the key in the lock - WHOOSH! Day slips inside as night sweeps out. Darkness tumbles into the air. It dances and whirls around the room. It goes under the bed, under the chair - everywhere!”

Fergal is Fuming!, by Robert Starling

“A dragon with a short temper is not a good combination, as Fergal’s family and friends soon find out. He burns the dinner (literally), reduces the football goal to ashes and absolutely cannot play a nice, quiet board game.

“It is only when he starts to notice other animals have clever tricks to calm down that Fergal begins to win back his friends, especially when he discovers dragons can cool off in a very handy way.”

“Pat the bat decides to be special - a SUPERBAT! But all his bat friends have amazing hearing. All of them can fly. And all bats can find their way in the dark. Pat is starting to think that he will never stand out - until a family of mice see him for what he really is - a HERO!”

The Goldfish Boy, by Lisa Thompson

“12-year-old Matthew is trapped in his bedroom by crippling OCD, spending most of his time staring out of his window as the inhabitants of Chestnut Close go about their business. Until the day he is the last person to see his next door neighbour’s toddler, Teddy, before he goes missing. Matthew must turn detective and unravel the mystery of Teddy’s disappearance - with the help of a brilliant cast of supporting characters.”

Author Lisa Thompson comes from Hadleigh and is a keen supporter of Beanstalk.

“Murph Cooper has a problem.

“His new school is top secret, and super weird. His classmates can all fly or control the weather or conjure tiny horses from thin air. And what’s Murph’s extraordinary skill? Um, oh yeah – he hasn’t got one.

“Just as well there are no revolting supervillains lurking nearby, their minds abuzz with evil plans. There are!? Right. Ok, then…

“It’s time for Kid Normal to become a hero!”

The Legend of Podkin One-Ear, by Kieran Larwood & Fernando Juarez

“Podkin One-Ear is a legend: a fearsome warrior rabbit whose reputation for cunning and triumph in battle has travelled the ages. But how did he become such a mighty fighter? The answer may surprise you.

“When a travelling bard arrives at Thornwood Warren on Midwinter night, he is warmly welcomed. In return for food and lodging, he settles down to tell the tale of Podkin One-Ear - and soon the rabbits are enthralled to hear the story of how one lost little rabbit overcame the cruellest enemy imaginable, and became the greatest warrior their land has ever known.”

Nevermoor: the trials of Morrigan Crow, by Jessica Townsend

“Morrigan Crow is cursed. Having been born on Eventide, the unluckiest day for any child to be born, she’s blamed for all local misfortunes, from hailstorms to heart attacks - and, worst of all, the curse means that Morrigan is doomed to die at midnight on her eleventh birthday.

“But as Morrigan awaits her fate, a strange and remarkable man named Jupiter North appears. Chased by black-smoke hounds and shadowy hunters on horseback, he whisks her away into the safety of a secret, magical city called Nevermoor. It’s then that Morrigan discovers Jupiter has chosen her to contend for a place in the city’s most prestigious organisation: the Wundrous Society.

“Violet hates living in Perfect. Why does everyone have to wear special glasses to stop them going blind? What are the strange noises in the night and why is Mum acting so weird? Then Dad disappears and Violet is determined to uncover the truth with the help of the mysterious Boy. But returning normality to Perfect is a battle they never imagined.”

Who Let the Gods Out?, by Maz Evans

“A shooting star crashes to Earth and changes Elliot’s life forever. The star is Virgo - a young Zodiac goddess on a mission. When the pair accidentally unleash the wicked death daemon Thanatos, they turn to the old Olympian gods for help. But after centuries of cushy retirement on Earth, are Zeus and his crew up to the task?”