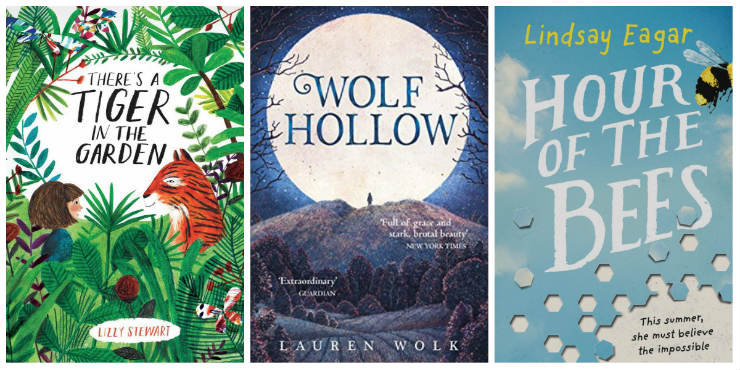 The shortlist for the 2017 Waterstones Children’s Prize has been announced today. Winners in the categories of Illustrated Books, Younger Readers and Older Readers, as well as an overall winner, will be announced on Thursday 30 March.

The books on the shortlist have been described by Waterstones managing director James Daunt as “wonderful books of great power and imagination. They show children’s publishing to be as inventive and inspiring as ever, and to have a pointed relevance that seems never more important in the shaping of ideas and attitudes.”

“Life can be hard when your little brother is a superhero. The whole world thinks Super Stan is amazing - but no one notices his big brother, Jack. But sometimes, even a superhero needs a little help. And when a superhero is in trouble, only a super big brother can save the day.”

The Journey, by Francesca Sanna

“With haunting echoes of current affairs, this beautifully illustrated book explores the unimaginable decisions made as a family leave their home and everything they know to escape the turmoil and tragedy brought by war.”

The Bear Who Stared, by Duncan Beedie

“There once was a bear who liked to stare. Bear doesn’t mean to be rude, he’s just curious - but nobody likes being stared at and it soon gets Bear into trouble. Luckily there is a goggly-eyed frog to set Bear straight!”

There’s a Tiger in the Garden, by Lizzy Stewart

“When Grandma says she’s seen a tiger in the garden, Nora doesn’t believe her. She’s too old to play Grandma’s silly games! Everyone knows that tigers live in jungles, not gardens. So, even when Nora sees butterflies with wings as big as her arm, and plants that try and eat her toy giraffe, and a polar bear that likes fishing, she knows there’s absolutely, definitely no way there could be a tiger in the garden. Could there?”

Tiger in a Tutu, by Fabi Santiago

“Set in Paris, with a dancing tiger as the star, this is an uplifting tale of following your dreams and pursuing your talent, no matter what, and about making friends. Max isn’t like other tigers - he is a tiger with a dream! He longs to pirouette and plié, to leap and spin. He wants to be a dazzling dancer, shining on the stage! Little dancers will love to see Max triumph and get his moment in the spotlight.”

Life is Magic, by Meg McLaren

“Magician Monsieur Lapin is auditioning assistants and Houdini the rabbit is the obvious choice - he loves magic and knows how to take care of everyone and everything in the theatre. So one night when things go wrong, Houdini tries to carry on with the show - and unfortunately that spells rabbit-shaped disaster for his human magician.”

“Annabelle has lived in Wolf Hollow all her life: a quiet place, still scarred by two world wars. But when cruel, manipulative Betty arrives in town, Annabelle’s calm world is shattered, along with everything she’s ever known about right and wrong. When Betty accuses gentle loner Toby - a traumatised ex-soldier - of a terrible act, Annabelle knows he’s innocent. Then Betty disappears. Now Annabelle must protect Toby from the spiralling accusations and hysteria, until she can prove to Wolf Hollow what really happened to Betty.”

“Darkus’s dad has disappeared, but his new friend, a giant beetle called Baxter, is some consolation. Together, boy and beetle set out to solve the mystery of his father’s disappearance. But Lucretia Cutter, a fashion designer with a penchant for beetle jewellery, is dead set against their success.”

Time Travelling with a Hamster, by Ross Welford

“On Al Chaudhury’s twelfth birthday his beloved Grandpa Byron gives him a letter from Al’s late father. In it Al receives a mission: travel back to 1984 in a secret time machine and save his father’s life.

The Girl of Ink & Stars, by Kiran Millwood Hargrave

“When Isabella’s friend disappears, she volunteers to guide the search party. As a mapmaker’s daughter, she’s equipped with elaborate ink maps and knowledge of the stars, eager to navigate the island’s forgotten heart. But beneath the mountains a legendary fire demon awakens, and her journey is fraught with danger.”

“When 13-year-old Lily’s inventor father vanishes after a Zeppelin crash, Lily’s determined to hunt down the truth behind his disappearance, helped by Robert, the local clockmaker’s son, and her wily mechanical fox Malkin. But shadowy figures are closing in and treachery lurks among the smoky spires of London - along with a life-changing secret.”

Captain Pug: the dog who sailed the seas, by Laura James & Églantine Ceulemans

“Pug is going on a seafaring adventure. He’s had jam tarts for breakfast. He’s wearing a smart sailor suit. There’s just one problem. Pug is afraid of the water!”

Hour of the Bees, by Lindsay Eagar</cite>

“This powerful debut novel delicately blurs the line between truth and fiction as Carol unravels the fantastical stories of her mentally ill grandfather.

“When she and her family move to his deserted ranch in order to transfer him to a care home, Carol struggles to cope with the suffocating heat and the effects of her grandfather’s dementia. Bees seem to be following her around, but the drought means this is impossible. She must be imagining things. Yet when her grandfather chooses her as the subject for his stories - tales of a magical healing tree, a lake, and the grandmother she never knew - Carol sees glimmers of something special in what her parents dismiss as Serge’s madness.

“As she rethinks her roots and what she thought she knew about her family, Carol comes to the realisation that Serge’s past is quickly catching up with her present.”

Anna and the Swallow Man, by Gavriel Savit

“Kraków, 1939. A million marching soldiers and a thousand barking dogs. This is no place to grow up. But Anna Lania is just 7 years old when the Germans take her father and suddenly, she’s alone.

“Then she meets the Swallow Man. He is a mystery, strange and tall. And like Anna’s missing father, he has a gift for languages: Polish, Russian, German, Yiddish, even Bird. When he summons a bright, beautiful swallow down to his hand to stop her from crying, Anna is entranced. Over the course of their travels together, Anna and the Swallow Man will dodge bombs, tame soldiers, and even, despite their better judgment, make a friend. But in a world gone mad, everything can prove dangerous.”

The Wildings, by Nilanjana Roy

“A small band of cats lives in the labyrinthine alleys and ruins of Nizamuddin, an old neighbourhood in Delhi. Miao, the clan elder, a wise grave Siamese; Katar, a cat loved by his followers and feared by his enemies; Hulo, the great warrior tom; Beraal, the beautiful queen, swift and deadly when challenged; Southpaw, the kitten whose curiosity can always be counted on to get him into trouble.

“Unfettered and wild, these and the other members of the tribe fear no one, go where they will, and do as they please. Until, one day, a terrified orange-coloured kitten with monsoon green eyes and remarkable powers lands in their midst - setting off a series of extraordinary events that will change their world forever.”

“Not cool enough, not clever enough, not street enough for anyone to notice me. I was the kid people looked straight through. Not any more. Not since Mr Orange.

“Sixteen-year-old Marlon has made his mum a promise - he’ll never follow his big brother, Andre, down the wrong path. So far, it’s been easy, but when a date ends in tragedy, Marlon finds himself hunted. They’re after the mysterious Mr Orange, and they’re going to use Marlon to get to him. Marlon’s out of choices - can he become the person he never wanted to be, to protect everyone he loves?”

“June’s life at home with her stepmother and stepsister is a dark one - and a secret one. Not even her father knows about it. She’s trapped like a butterfly in a net. But then she meets Blister, a boy in the woods. And in him, June recognises the tiniest glimmer of hope that perhaps she can find a way to fly far, far away from home and be free. Because every creature in this world deserves their freedom - but at what price?”

The Sun is also a Star, by Nicola Yoon

“Natasha: I’m a girl who believes in science and facts. Not fate. Not destiny. Or dreams that will never come true. I’m definitely not the kind of girl who meets a cute boy on a crowded New York City street and falls in love with him. Not when my family is 12 hours away from being deported to Jamaica. Falling in love with him won’t be my story.

“Daniel: I’ve always been the good son, the good student, living up to my parents’ high expectations. Never the poet. Or the dreamer. But when I see her, I forget about all that. Something about Natasha makes me think that fate has something much more extraordinary in store - for both of us.

“The Universe: Every moment in our lives has brought us to this single moment. A million futures lie before us. Which one will come true?”