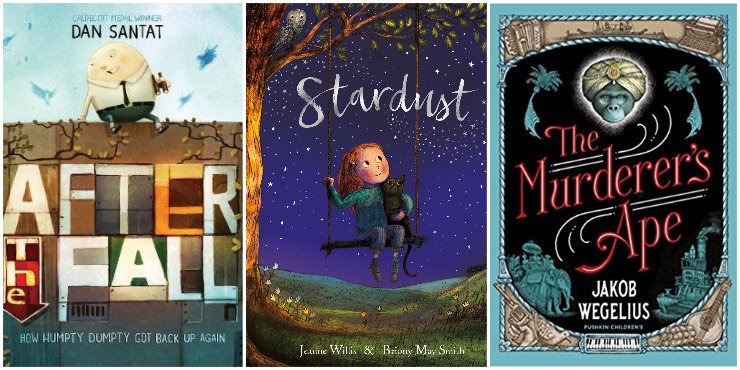 This year’s UKLA Book Awards shortlist, judged by teachers, encompasses fiction, non-fiction, books in translation and verse novels. There are three categories - 3-6 years, 7-11 years and 12-16 years - and the winners will be announced on 12 July.

After the Fall: how Humpty Dumpty got back up again, by Dan Santat

“After the fall, Humpty Dumpty is a broken egg. Life is tough: he’s so afraid of heights, he can’t even bear to climb onto his bed, or reach his favourite cereal on the top shelf at the supermarket.

“But one day, fuelled by his passion for bird-watching, he decides to conquer his fears and something amazing happens.”

The Last Wolf, by Mini Grey

“Once upon a time, Little Red set off into the woods to catch a wolf. But the woods aren’t all they seem - and are there even any wolves left?

“The Last Wolf re-imagines the classic Little Red Riding Hood fable in an entirely new way. Can Little Red help her new friends in need and recover the wild days of the past?”

“Bob the bird loves to paint pictures with his best friend Bat. But one day Bat goes away and Bob is sad. He tries to paint, but everything he paints is blue! Can his friends help him to find his bright colours again?”

“One little girl dreams of being a star. But whether it’s finding Mum’s lost wedding ring or winning the fancy-dress prize, her big sister always shines brighter. Yet for her grandad she is a star and, as he dries her eyes and they both gaze up at the night sky, he tells a story, the story of the beginning of the world. Everything and everyone is made of stardust, and we all shine in different ways.

“It’s a lesson this little girl will never forget - and one day her dream comes true, and she finally realises her ambition to become an astronaut and fly up to the stars.”

The Big Book of the Blue, by Yuval Zommer

“Why do octopuses have eight arms? Why do crabs run sideways? Are jellyfish made of jelly? Yuval Zommer’s beautiful book provides the answers to these and many more fishy questions. His wonderfully quirky illustrations show off all kinds of slippery, shimmery and surprising sea creatures, including sea turtles, whales, sharks, rays and seahorses.”

“Bat’s cherries keep going missing. One by one, the precious red cherries are whisked away by mischievous animal tricksters behind Bat’s back. Bat fruitlessly tries to catch the culprit and rescue those poor cherries - all to no avail. Will the cherries ever be restored to their rightful owner?”

“AJ’s grandfather has always been the one to keep his unusual family together, so when he dies things start to unravel at the edges. AJ is worried about his parents but they don’t really seem to notice. In order to deal with his grief and to keep his anxiety at bay, AJ does what he and his grandfather did best: running. Round and round the Olympic Park, aiming for the nationals, running to escape, AJ only seems to be heading ever closer to disaster.”

“When the whole community is divided over the fate of the hen harriers that nest up there in the heather, Joe finds himself stuck right in the middle, with a choice to make, and a huge secret to keep. Joe can’t do what’s right for everyone. But can he find the strength to fight for what he really believes in?”

The Wild Robot, by Peter Brown

“When robot Roz opens her eyes for the first time, she discovers that she is alone on a remote, wild island. She has no idea how she got there or what her purpose is - but she knows she needs to survive. After battling a fierce storm and escaping a vicious bear attack, she realises that her only hope for survival is to adapt to her surroundings and learn from the island’s unwelcoming animal inhabitants. As Roz slowly befriends the animals, the island starts to feel like home - until, one day, her mysterious past comes back to haunt her.”

“Sally Jones is not only a loyal friend, she’s an extraordinary individual. In overalls or in a maharaja’s turban, this unique gorilla moves among humans without speaking, but understanding everything. She and the Chief are devoted comrades who operate a cargo boat.

“But when a deal goes horribly wrong, and the Chief is convicted of murder, Sally Jones embarks on a harrowing quest to clear his name.”

“Budi’s going to play for the greatest team on earth, instead of sweating over each stitch he sews, each football boot he makes. But one unlucky kick brings Budi’s world crashing down. Now he owes the Dragon, the most dangerous man in Jakarta. Soon it isn’t only Budi’s dreams at stake, but his life.”

The Poet X, by Elizabeth Acevedom

“Xiomara has always kept her words to herself. When it comes to standing her ground in her Harlem neighbourhood, she lets her fists and her fierceness do the talking. But X has secrets - her feelings for a boy in her bio class, and the notebook full of poems that she keeps under her bed. And a slam poetry club that will pull those secrets into the spotlight. Because in spite of a world that might not want to hear her, Xiomara refuses to stay silent.”

“After Will’s brother is shot in a gang crime, he knows the next steps. Don’t cry. Don’t snitch. Get revenge. So he gets in the lift with Shawn’s gun, determined to follow The Rules.

“Only when the lift door opens, Buck walks in, Will’s friend who died years ago. And Dani, who was shot years before that. As more people from his past arrive, Will has to ask himself if he really knows what he’s doing.”

“Awarded the Gold, Silver and Bronze trotters after a vote by their classmates on Facebook, Mireille, Astrid and Hakima are officially the three ugliest girls in their school, but does that mean they’re going to sit around crying about it? Well, yes, a bit, but not for long! Climbing aboard their bikes, the trio set off on a summer road trip to Paris, their goal: a garden party with the French president.

“As news of their trip spreads they become stars of social media and television. With the eyes of the nation upon them, the girls find fame, friendship and happiness, and still have time to consume an enormous amount of food along the way.”

“But there are lies behind Father John’s words. Outside, there are different truths.

“Then came the fire.”

“Mary’s Monster is the compelling and beautifully illustrated story of Mary Shelley - the original rebel girl. When her fractured bond with her beloved father, and her elopement with the mercurial (and married) poet Percy Bysshe Shelley at the age of 16, led her to Switzerland, few could have imagined the consequence would be such a book. But, in the crucible of societal disapproval and tenuous circumstances, Mary Shelley created Frankenstein, and his monster, forged in the fire of her troubled and tragic life.

“Part biography, part fantasy and part feminist allegory, Mary’s Monster is an engrossing take on one remarkable woman. And her monster.”