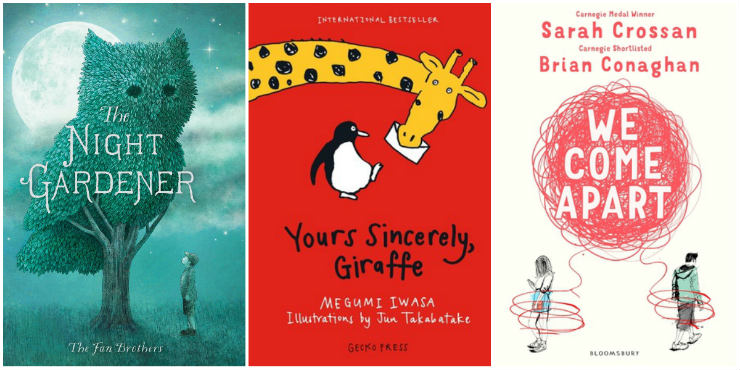 This year’s UKLA Book Awards shortlist, judged by teachers, encompasses fiction, non-fiction, books in translation and graphic novels. There are three categories - 3-6 years, 7-11 years and 12-16 years - and the winners will be announced on 6 July.

“One day, William discovers that the tree outside his window has been sculpted into a wise owl. In the following days, more topiaries appear and each one is more beautiful than the last. Soon, William’s grey little town is full of colour and life. And though the mysterious night gardener disappears as suddenly as he appeared, William and his town are changed forever.”

Odd Dog Out, by Rob Biddulph

“It’s a dog’s life in the big city. Come join one busy dog on her journey to find her place in the world.”

“Frog is changing the rules - dogs no longer sit on frogs. Phew! Dogs now sit on logs - and everyone else is going to have to sit somewhere different too. Will cats want to sit on gnats? Will spiders like sitting on gliders? Will whales be happy to sit on nails? And, most importantly, where is Frog going to sit?”

“Young Chris is an astronaut. A very busy astronaut. Saving the planet from aliens is much more important than taking baths or going to bed. Because at bedtime the worst sort of alien appears - darkness.

“But when Chris watches the first televised moon landing, he discovers that there is a dark out in space that is much darker than he’s used to. It’s the darkest dark ever, and he realises that the unknown can be exciting!”

Colin and Lee, Carrot and Pea, by Morag Hood

“Lee is a pea. All of his friends are peas; except Colin. Colin isn’t a pea.

“And so begins the deliciously funny story of two very different friends: a small green pea and a tall orange carrot stick. Colin the carrot can’t do everything the peas can, but he has some special carrot-y qualities that make him a very good friend to have.”

It Starts with a Seed, by Laura Knowles & Jennie Webber

“In gentle rhyme, It Starts with a Seed evocatively explores the growth of a tiny sycamore seed.

“Taking a journey through the seasons and years, we follow the seed as it transforms from a seedling to a sapling, then a young tree, until it becomes a large tree with its branches and roots filling the page.”

The White Fox, by Jackie Morris

“Lost, alone and far away from home, Sol feels a deep connection with the little Arctic fox he discovers down at the Seattle docks - he too feels lost in the big city. Dad is always busy working and Sol misses the grandparents they have left behind. So Sol decides to take the little fox back home, reuniting his own family in the process.”

“Find out all about the brilliant beasts you never even knew existed. Bison are banned and tigers are taboo! Say goodbye to the gnu, cheerio to the cheetah and poo poo to the panda. The world of lesser spotted animals starts here.”

“Giraffe is bored, as usual. He’d love a friend to share things with. So he writes a letter and sends it as far as possible across the other side of the horizon. There he finds a pen pal - called Penguin.

“Giraffe knows nothing about penguins and his letters are full of questions. What does a penguin look like? Where is a penguin’s neck? And so the letters begin to fly from horizon to horizon.”

“But when his clever older brother, Musa, gets mixed up with some young political activists, everything changes. Before long, bombs are falling, people are dying, and Omar and his family have no choice but to flee their home with only what they can carry. Y

“et no matter how far they run, the shadow of war follows them - until they have no other choice than to attempt the dangerous journey to escape their homeland altogether. But where do you go when you can’t go home?”

“When Mister P stumbles through Arthur’s front door an interesting and fun new friendship is born. Arthur could do with someone to talk to and Mister P is a good listener - as well as being amazing at football, scared of spiders, extremely messy at eating, and the best at hugs when you need them! There are times when only a polar bear will do.”

The Street Beneath My Feet, by Charlotte Guillian & Yuval Zommer

“When you’re walking along the city streets there’s always so much to see and hear. But do you ever stop and look down? Have you ever wondered what’s going on deep in the ground under your feet? What about in the countryside? What goes on underground there?

“Starting in the city, take a journey down though the layers of the Earth, all the way to the planet’s core and out the other side. There are so many amazing sights to see along the way!”

“Zimbabwe, 1994. A group of children spot peculiar lights in the sky over the grounds of their school. From this moment on, six young people’s lives are changed forever.

“Gary hides the anguish he feels now his mum’s left, acting out in fury and hatred. Chloe has no words for the thing she fears most every day. Karl is the headmaster’s son, now fallen from grace. Tendai knows he can never live up to his grieving father’s ideals. And Sixpence watches all, knowing he’ll never be like these other children. All of them have seen something they can’t explain.

“In amongst these tangled, tortured lives, comes a group of psychologists to verify the spookily similar claims of every witness. Their daughter, Holly, can tell there’s more to it than aliens or mass hysteria - can she reveal the dark truths that haunt them?”

Encounters was also longlisted for the 2018 Carnegie Medal.

“Jess would never have looked twice at Nicu if her friends hadn’t left her in the lurch. Nicu is all big eyes and ill-fitting clothes. He’s working on his English but he has to practise with the teachers because no one speaks to him. He’s so not her type.

“Appearances matter to Jess. She’s got a lot to hide. Nicu thinks Jess is beautiful. His dad brought Nicu and his mum here for a better life, but now all they talk about is going back home to find Nicu a wife. The last thing he wants is to get married. He wants to get educated, do better, stay here in England. But his dad’s fists are the most powerful force in Nicu’s life, and in the end, he’ll have to do what his dad wants.”

“Alpha Coulibaly is emblematic of the refugee crisis today - just one of millions on the move, at the mercy of people traffickers, endlessly frustrated, endangered and exploited as he attempts to rejoin his family already in Europe.

“With a visa, Alpha’s journey would take a matter of hours; without one he is adrift for 18 months. Along the way he meets an unforgettable cast of characters, each one giving another human face to the crisis.”

“Anapra is one of the poorest neighbourhoods in the Mexican city of Juarez - 20 metres outside town lies a fence, and beyond it, America - the dangerous goal of many a migrant.

“Faustino is one such trying to escape from the gang he’s been working for. He’s dipped into a pile of dollars he was supposed to be hiding and now he’s on the run. He and his friend, Arturo, have only 36 hours to replace the missing money, or they’re as good as dead.

“Watching over them is Saint Death. Saint Death (or Santissima Muerte) - she of pure bone and charcoal-black eye, she of absolute loyalty and neutral morality, holy patron to rich and poor, to prostitute and narco-lord, criminal and police-chief. A folk saint, a rebel angel, a sinister guardian.”

Saint Death has also been shortlisted for the 2018 Carnegie Medal.

“Garth Nix is on hilarious form as he spins his very own fairy tale, featuring Princess Anya, who, with her loyal dog, must embark on a terribly important (capital Q) Quest to acquire the ingredients for a reversal lip balm, the vital item needed to change a frog back to a prince - oh, and save her kingdom from her villainous step(step)father.”

Where the World Ends, by Geraldine McCaughrean

“In the summer of 1723, 8 boys and 3 men were marooned on a rocky stack in the middle of the sea at the edge of the Outer Hebrides. This book tells the story of how they survived nine months of deadly storms, madness and starvation with only a few ropes and baskets, and their own fortitude and endurance to save them.”

Where the World Ends has also been shortlisted for the 2018 Carnegie Medal.