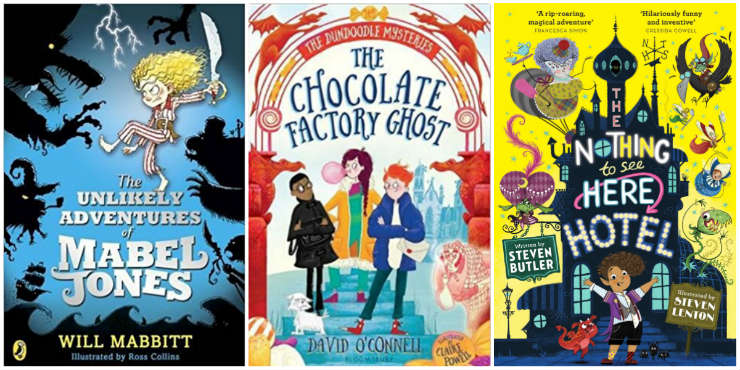 WHSmith’s Tom Fletcher Book Club aims to get children excited about reading with brilliant books. Why not try one of their highly-recommended titles?

The Unlikely Adventures of Mabel Jones, by Will Mabbitt & Ross Collins

“When Mabel Jones unknowingly commits ‘The Deed’ she finds herself swiftly bundled into a sack and carried off to the pirate ship the Feroshus Maggot. Crewed by the strangest bunch of pirates you would ever want to meet and captained by the dreaded Idryss Ebeneezer Split (a wolf with a false leg carved from a human thighbone, a rusty cutlass sheathed in his belt and a loaded pistol tucked in his pants with no fear of the consequences), the Feroshus Maggot whisks Mabel Jones off on the adventure of a lifetime.”

“11-year-old Zach has magical powers, just like everyone in his family, but he’s having trouble harnessing his abilities. To help his powers manifest, and to help him appreciate his natural gifts, Zach’s parents decide that he needs to be around ‘real’ people more. No more homeschooling - it’s time for Zach to enter the scary world of secondary school!

“But Zach can’t resist a bit of magic. A simple spell ends with him and his best friend stuck in a vending machine. Someone filmed it and by the next day he’s gone viral on YouTube, in the process attracting the attention of Rachel, the prettiest girl at school.

“With everyone wondering how Zach does his tricks, and with head mean girl Tricia plotting to bring him down, Zach’s got his work cut out if he’s going to survive year 7 and keep his dreams of becoming a master magician intact.”

Dave Pigeon: How to deal with bad cats and keep (most of) your feathers, by Swapna Haddow & Sheena Dempsey

“If you are a cat and you are able to read this, you have taken a pigeon hostage so that you can trick them into translating the Pigeonese words into Meow. I demand you release the hostage pigeon now. My book contains TOP SECRET ideas that are NONE of a cat’s business.

“Dave Pigeon is writing a book on how he defeated Mean Cat in order to help fellow pigeons everywhere. Cats beware!”

Timmy Failure: Mistakes were made, by Stephen Pastis

“Meet Timmy Failure, founder of the ‘best’ detective agency in town - Total Failure, Inc. Timmy may only be 11, but with the help of his polar bear, Total, he already has plans for world domination. Plans that will make his mother rich and unpaid bills a thing of the past. And plans that will defeat Corrina Corrina, ‘The One Whose Name Shall Not Be Uttered’. But she’s not going away.”

I Swapped My Brother on the Internet, by Jo Simmons & Nathan Reed

“‘I can get a new brother? On the internet?’ Jonny muttered. ‘Oh sweet mangoes of heaven!’.

“Everyone has dreamed of being able to get rid of their brother or sister at one time or another - but for Jonny, the dream is about to become a reality with SiblingSwap.com! What could be better than someone awesome to replace Ted, Jonny’s obnoxious older brother?

“But finding the perfect brother isn’t easy, as Jonny discovers when Sibling Swap sends him a line of increasingly bizarre replacements: first a merboy, then a brother raised by meerkats, and then the ghost of Henry the Eighth! What’s coming next?! Suddenly old Ted isn’t looking so bad. But can Jonny ever get him back?”

“Archie McBudge knows his lucky underpants must really work because when he and his mum are summoned to Honeystone Hall in the remote Scottish village of Dundoodle, they find Archie has inherited not only the enormous hall, but the whole of the world-famous McBudge Confectionery Company from Great-Uncle Archibald. That’s a new home, a fortune and a lifetime’s supply of treats rolled into one!

“But all is not well in Dundoodle, and when Archie reads the mysterious letter his great-uncle left him he finds himself on a quest to save his family’s company from ruin. With the help of his new friends Fliss and Billy, Archie has to try to figure out the puzzles of Honeystone before his sweet future melts away like an ice lolly in the sun!”

“Dylan has wanted a superpower for as long as he can remember, especially since his brother and sister have got really cool ones. But when his wish finally comes true, Dylan is mightily disappointed. For Dylan has become Iguana Boy. He can talk to Iguanas - rubbish. And when supervillain Celina Shufflebottom kidnaps all the superheroes in London, Dylan must work out how to use his new team of chatty iguanas to save the day. He’s going to have to think outside the box, (the pizza box), if he’s going to become the hero he’s always dreamed of. If he’s going to make Iguana Boy cool.”

“Andy and Terry’s amazing treehouse has 13 new levels! They’ve added a chocolate waterfall you can swim in, a volcano for toasting marshmallows, a bulldozer-battling level, a baby-dinosaur-petting zoo, a not-very-merry merry-go-round, a boxing elephant called the Trunkinator, an X-ray room, a disco with light-up dance floor, the world’s scariest roller coaster and a top-secret 39th level which hasn’t even been finished yet! But what good is all this stuff when Andy and Terry are trying to write their fastest book ever? You’ll have to read it to find out!”

The Nothing to See Here Hotel, by Steven Butler & Steven Lenton

“Welcome to The Nothing to See Here Hotel! A hotel for magical creatures, where weird is normal for Frankie Bannister and his parents who run it.

“When a goblin messenger arrives, announcing the imminent arrival of the goblin prince Grogbah, Frankie and his family rush into action to get ready for their important guest. But it soon becomes obvious that the Bannister family are going to have their work cut out with the demanding prince and his never-ending entourage, especially when it turns out the rude little prince is hiding a secret.”

The Travels of Ermine: Trouble in New York, by Jennifer Gray & Elisa Paganelli

“Meet Ermine, a small stoat on a big journey. In fact, she’s on a world tour and determined to fill her scrapbook with tales of adventure.

“Armed with her toolkit and feathered hat, Ermine arrives in New York to stay with Michael Megabucks and his son - and is soon fighting off alligators at Central Park Zoo and outwitting bungling diamond thieves!”