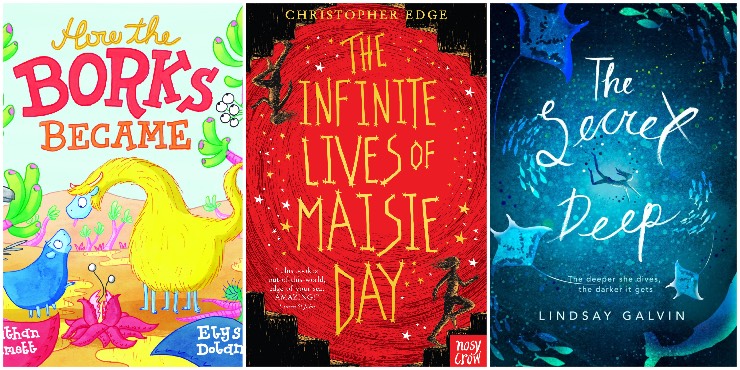 The winners of the first ever STEAM Children’s Book Prize have recently been announced. The prize highlights the importance of science, technology, engineering, arts and maths by celebrating books that feature these subjects.

Winner: How Does a Lighthouse Work?, by Roman Belyaev

“How can we tell one lighthouse from another? What does a lighthouse keeper do? Where are the most unusual lighthouses in the world? Depart on an enchanting voyage with the school children in this book to discover the answers to these questions along with other fascinating facts about lighthouses and how they work.”

“A secret, watery world covers the greater part of our planet and some of Earth’s most incredible animals live here. In this book, you can travel under the waves to discover an extraordinary variety of creatures. Your journey will take you to see dolphins leaping in sunlit waters and colourful angelfish swimming in the shallow seas around coral reefs. You will encounter giant octopuses and mysterious anglerfish that live in the dark abyssal world of the deepest oceans. And you will be thrilled by the confrontation between a pack of orcas and a great white shark, and amazed by the size of the snaking tentacles of the lion’s mane jellyfish.

“Dive into this treasure trove of sea creatures and immerse yourself in this wondrous underwater world.”

“From the well-known faces of conservation, such as polar bears, tigers and orangutans, to the lesser-known threatened Malagasy rainbow frog, kakapo and bee, this striking book looks at 38 endangered animals from around the world and the conservation efforts that are being undertaken to save them.

“Written by vet, conservationist and TV presenter, Dr Jess French, and illustrated in a striking graphic artwork style, Saving Species is sure to inspire future conservationists and animal lovers of all ages.”

“Adam Murphy interviews the dead famous scientists who changed the world - getting their stories straight from the corpses’ mouths! Reading this series is like having history injected into your brain! It guarantees laughs, surprises, and a whole host of the most astonishing achievements you’ll ever discover.”

“Hi, I’m Earth! But you can call me Planet Awesome.

“In this hilarious and informative book filled to the brim with eye-opening, kid-friendly facts about our planet, you’ll find scientifically accurate information from children’s book author Stacy McAnulty and vibrant art by award-winning illustrator David Litchfield.”

Winner: How the Borks Became, by Jonathan Emmett & Elys Dolan

“Borks live on a planet quite like our own Earth. They have shaggy yellow fur and long thin necks. But once they had short blue fur and almost no necks at all. How could this happen? Well, it didn’t come about all at once…

“Jonathan Emmett tells a delightful story in verse about the Borks and all the things that happened to make them gradually look quite different, while still remaining Borks. And by the end of the story, the reader will have a very good notion of how Evolution by natural selection works.”

Do Not Lick this Book, by Idan Ben-Berak & Julian Frost

“Min is a microbe. She is small. Very small. In fact so small that you’d need to look through a microscope to see her. Or you can simply open this book and take Min on an adventure to amazing places she’s never seen before - like the icy glaciers of your tooth or the twisted, tangled jungle that is your shirt.”

“A picture book that will take you to the stars, featuring epic space scenes and a giant double gatefold surprise. Blast off on a cinematic space adventure that is out of this world.”

“Izzy Gizmo just loves to invent, but her inventions never seem to work the way she wants them to. And that makes her really CROSS! When she finds a crow with a broken wing she just has to help. But will she be able to put her frustrations to one side and help her new friend to fly again?”

“Once, in an old rusty bin in an old rusty playground in an old empty park. there lived a little tortoise. But Tortoise is lonely. He’s never seen any other tortoises, and wonders where they could all be hiding.

“Then, one day, he looks up and the night sky, and sees a million blinking lights winking at him. ‘That must be where the other tortoises are - at the top of the sky! I wish I could join them.’ But how can a little tortoise get to the top of the sky? And so begins a magical journey.”

Winner: The Infinite Lives of Maisie Day, by Christopher Edge

“It’s Maisie’s birthday and she can’t wait to open her presents. She’s hoping for the things she needs to build her own nuclear reactor. But she wakes to an empty house and outside the front door is nothing but a terrifying, all-consuming blackness.

“Trapped in an ever-shifting reality, Maisie knows that she will have to use the laws of the universe and the love of her family to survive. And even that might not be enough.”

The Infinite Lives of Maisie Day was also the overall winner.

Your Choice Award winner: Battle of the Beetles, by M. G. Leonard

“The beetle adventure continues as Darkus and his friends seek wicked Lucretia Cutter’s secret Biome in the Amazon rainforest. If they can’t stop her from unleashing her hoard of giant Frankenstein beetles, the planet will never be the same again…”

This prize was chosen by children themselves.

“Al is experimenting to find out what kind of covering his time machine will need to survive its SPLASH DOWN! back to Earth. Water experiments have a habit of making things very wet and messy. Can they finish their experiments before mum finds out?”

Below Zero, by Dan Smith

“Twelve-year-old Zak is plane-wrecked on an abandoned research outpost in the Antarctic with his sister and parents. Here, a series of nightmarish occurrences and bizarre visions suggest a link to something else - a presence beneath the ice - which only Zak can understand…”

“17-year-old Pete Blankman is a maths prodigy. He also suffers from severe panic attacks. Afraid of everything, he finds solace in the orderly and logical world of mathematics and in the love of his family: his scientist mum and his tough twin sister Bel, as well as Ingrid, his only friend.

“However, when his mother is found stabbed before an award ceremony and his sister is nowhere to be found, Pete is dragged into a world of espionage and violence where state and family secrets intertwine.”

The Loneliest Girl in the Universe, by Lauren James

“Can you fall in love with someone you’ve never met, never even spoken to - someone who is light years away?

“Romy Silvers is the only surviving crew-member of a spaceship travelling to a new planet, on a mission to establish a second home for humanity. Alone in space, she is the loneliest girl in the universe until she hears about a new ship which has launched from Earth - with a single passenger on board. A boy called J. Their only communication is via email - and due to the distance between them, their messages take months to transmit. And yet Romy finds herself falling in love.

“But what does Romy really know about J? And what do the mysterious messages which have started arriving from Earth really mean? Sometimes, there’s something worse than being alone.”

Read Amélie’s review of The Loneliest Girl in the Universe →

The Electrical Venus, by Julie Mayhew

“In the harsh company of a travelling side-show, Mim doesn’t know what love looks like. But when a stranger joins the fair and chooses Mim to be part of his awesome new act of ‘electrickery’, Mim is elevated to the role of ‘Electrical Venus’. Is this starring role her true worth, or is love worth more than a penny for an electrifying kiss?”

“Lacey Chu has big dreams of becoming a companioneer for MONCHA, the largest tech firm in North America and the company behind the ‘baku’ - a customisable smart pet that functions as a phone but makes the perfect companion too.

“When Lacey finds out she hasn’t been accepted into Profectus - the elite academy for cutting edge tech - it seems her dreams are over. Worst of all, rather than getting to choose one of the advanced bakus, she’s stuck with a rubbish insect one.

“Then, one night, Lacey comes across the remains of an advanced baku. Once it might’ve been in the shape of a cat but it’s now mangled and broken, no sign of electronic life behind its eyes. Days of work later and the baku opens its eyes. Lacey calls him Jinx - and Jinx opens up a world for her that she never even knew existed, including entry to the hallowed halls of Profecus.”

The Fandom, by Anna Day

“Violet’s in her element - cosplay at the ready, she can’t wait to feel part of her favourite fandom: The Gallow’s Dance, a mega-story and movie franchise. But at Comic Con, a freak accident transports Violet and her friends into the The Gallows Dance for real - and in the first five minutes, they’ve caused the death of the heroine. It’s up to Violet to take her place, and play out the plot the way it was written. But stories have a life of their own.”

The Secret Deep, by Lindsay Galvin

“When Aster wakes alone, stranded, on a tropical island, she has no idea what has happened, why she is there, or where to find her younger sister, Poppy. The answers lie in the secretive underwater world surrounding the desert island, populated by the beautiful and the unexpected.”