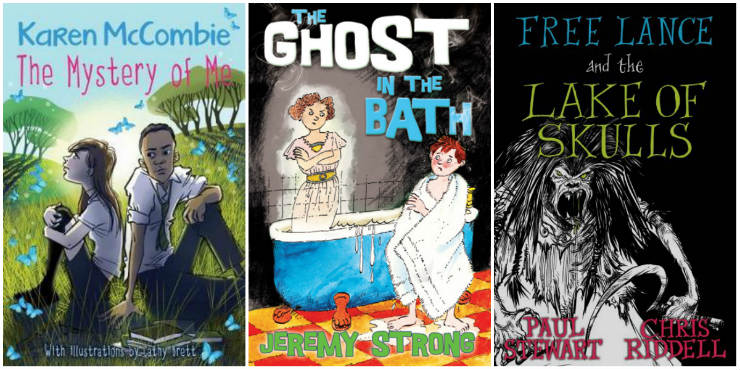 Children with dyslexia needn’t worry that the Summer Reading Challenge is not for them. We’ve got a selection of the newest dyslexic-friendly books for various ages and interests. These books, from Barrington Stoke, are printed on thick cream-coloured paper with a matt surface and feature a specially-created typeface, wider gaps between lines and paragraphs and clear punctuation.

The Ghost in Annie’s Room, by Philippa Pearce & James Cate

“Emma is happy to sleep in her Cousin Annie’s old attic bedroom when staying with her great-aunt Win. But when bedtime comes, she starts feeling nervous. Her brother, Joe, insists that the room is haunted. Could he be right?”

The Mystery of Me, by Karen McCombie & Cathy Brett

“Ketty was technically dead for two minutes and thirty-nine seconds according to the doctors who saved her. She’s on the mend yet can’t remember anything about her life before the accident. But people are treating her really weirdly and Ketty just can’t shake the feeling that something is terribly wrong. When her new friend Otis reveals that pre-crash Ketty was a spiteful bully, she faces a tough decision. What kind of person can she be now?”

“Once there was a very fierce cat. Not just fierce: totally, terrifyingly, stupendously fierce. Everyone was afraid of this cat. Her name was Dread and everyone dreaded Dread Cat. But then Dread Cat started to run out of luck catching mice. She hadn’t caught any for ages. So she announced that she was giving up chasing mice and promised to never again hunt another mouse. The war was over. But was it really?”

“When Cinder Ashok’s mother dies in a freak carriage accident, he doesn’t think life can get any worse but it does. His dad marries a total horror and Ash Boy inherits bullying step-brothers Rock and Boulder. All Cinder wants is to be left in peace in the library with his side-kick Buttons. But Rock and Boulder are on a mission to compete in Prince Charmless’ upcoming jousting tournament. Everything turns upside down when Cinder’s fairy godfather magics him into the tournament. Now he’s got a happily-ever-after in his sights!”

“When Marcie’s silver kitten Misty goes missing, her best friend Ellie leaps into action and Operation Find Misty is born. But soon Ellie’s detective skills are put to the test. Will Marcie’s dreams of an artistic boy help the pair solve the mystery of the lost kitten?”

Sammy and the Starman, by Anne Cassidy & Tony Ross

“Sammy is thrilled when he finds a tiny space rocket in the park. And even more thrilled when he discovers its owner, Jax, a very small and very irritable 300-year-old spaceman. Can Sammy save Jax from the greedy clutches of his nosey neighbour Dennis, and help him get home?”

The Ghost in the Bath, by Jeremy Strong & Scoular Anderson

“Luke’s family has a new member - Ellie, the ghost in the bath! Can Luke help Ellie find her fiancé Charlie as well as finish his history project for Mrs Trouble - sorry, Mrs Rubble - before he’s really in hot water?”

Free Lance and the Lake of Skulls, by Paul Stewart & Chris Riddell

“Free Lance is down on his luck and stuck in the Badlands. Until he has an offer he can’t refuse. Integrating text and illustration, this humorous fantasy-adventure follows its hero into the Lake of Skulls to recover an enchanted crown. It is accessible for children as young as seven.”

Norman the Norman from Normandy, by Philip Ardagh & Tom Morgan-Jones

“Norman, the Norman from Normandy, loves fighting. He gets up every morning wearing nothing but his chainmail and runs around his bedroom waving his sword, then uses it to chop the top off his boiled eggs.”

“Plucky young penguin Nellie Choc-Ice goes on an epic adventure when her iceberg floats off to the North Pole. Nellie needs all her wits about her to outsmart a steady stream of hungry creatures who reckon she looks like a tasty treat. Will Nellie ever find her way home?”

“Clare lives on a farm. If her dad sees a fox, he kills it. But when Clare finds a tiny fox who’s lost his mum, she wants to save him. Can she keep the fox cub safe?”

“When horse-loving Kami is invited to spend the summer at best friend Macy’s family ranch, Kami is shocked to discover one of the horses being hobbled and whipped by Molly’s brother. What is behind Wes’s increasingly cruel treatment, and can Kami save Storm Cloud?”

The Strange Case of Dr Jekyll and Mr Hyde, by Robert Lewis Stevenson

“John Utterson, a respectable London lawyer, is compelled to uncover the strange connection between his old friend, the brilliant scientist Dr Henry Jekyll, and a brooding and dangerous stranger called Edward Hyde.”