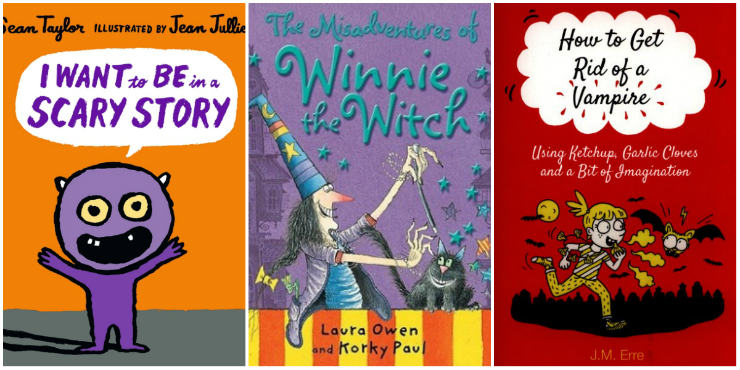 That’s Not My Witch, by Fiona Watt & Rachel Wells

“Her dress is too silky…”

There are five friendly witches to meet in this Halloween addition to the much-loved tactile ‘That’s Not My…’ series for babies and toddlers.

“Ten little monsters set off in search of adventure. But what will the ten little monsters do when they meet a howling werewolf, a giant spider and other scaries in the night? A monster stomp of a book with lots of things to spot and count on every page.”

Where the Bugaboo Lives, by Sean Taylor & Neal Layton

A brilliant ‘choose your own adventure’ style picture book where every page contains a fright to be overcome before you decide whether or not to face the bugaboo on the final pages.

I Want to Be in a Scary Story, by Sean Taylor & Jean Jullien

“Monster wants to be in a scary story - but is he brave enough? Scary stories have creepy witches and creaky stairs and dark hallways and spooky shadows. Oh my goodness me! That is very scary. Maybe, a funny story would be better after all?”

Meg and Mog, by Helen Nicoll and Jan Pieńkowski

An enduring classic about a witch and her cat, in which Meg goes to a spell party and accidentally turns all her friends into mice.

The classic about a family of skeletons who spend a night looking for people to scare and riding on skeleton animals at the zoo.

The Misadventures of Winnie the Witch, by Laura Owen & Korky Paul

Following on from the original Winnie the Witch picture books by Valerie Thomas, Laura Owen’s series is aimed at independent readers:

“Winnie the Witch is an accident waiting to happen! So join her, if you dare, with her long-suffering cat Wilbur in eight exciting escapades. Whether they’re scoring goals, selling knickers, catching bats, or eating turkey-tonsil titbits, giggles are guaranteed in these superb stories.”

From the Monsters Like Us comic book series which follows three friends, a werewolf, a demon and a zombie, “as they attempt to get through school without eating the teachers, running wild or raising hell.”

How to Get Rid of a Vampire, using ketchup, garlic cloves and a bit of imagination, by J. M. Erre, Sander Berg (trans.) & Clémance Lallemand

“Zazie has just received a beautiful new notebook, and decides to keep a diary. Brimming with imagination, she writes down her impressions of her cat Roudoudou, her awful cousin Lucas and her new teacher, Mr Labat - who, with his pale skin andblood-red lips, must surely be a vampire!

“In order to save her life and those of her classmates, Zazie must find a way to get rid of Mr Labat - and what better way than by following the advice found in Bram Stoker’s Dracula.”

In the sequel to Groosham Grange, David is on course to win the Unholy Grail, but someone wants to stop him winning and won’t stop at putting the school itself in danger.

In the third title in the Elf Girl and Raven Boy series, our heroes are plunged into some “very strange, creepy, altogether spooky and hilarious adventures, this time all at sea with pirates and pigs, mermaids and monsters and an invisible man called Mervin.”

Amelia Fang and the Barbaric Ball, by Laura Ellen Anderson

First in a new series:

“Welcome to the world of Nocturnia, where darkness reigns supreme, glitter is terrifying, and unicorns are the stuff of nightmares!

“Amelia Fang would much rather hang out with her pet pumpkin Squashy and her friends Florence the yeti (DON’T CALL HER BEAST!) and Grimaldi the reaper than dance at her parents’ annual Barbaric Ball. And when the King’s spoiled son Tangine captures Squashy, Amelia and her friends must escape the party to plan a daring rescue! In their race against time, they begin to realise things in Nocturnia may not be quite what they seem.”

Shiverton Hall and The Creeper by Emerald Fennell

These supernatural thrillers are ‘surprisingly chilling’. Not for the easily unnerved, but perfect if you love your stories on the spooky side.