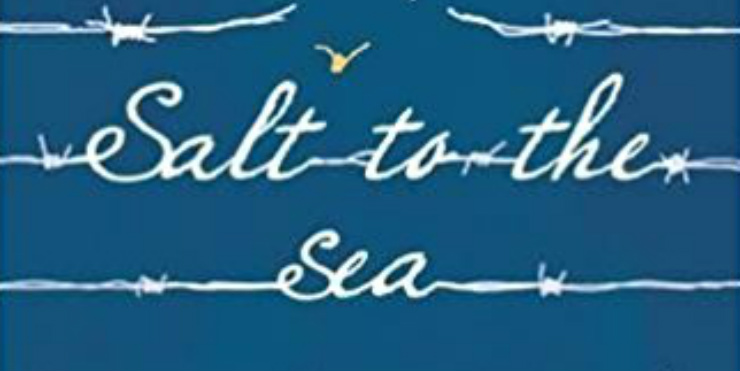 Salt to the Sea, by Ruta Sepetys, won the prestigious CILIP Carnegie Medal 2017 for an outstanding book written in English for children and young people. Library and information advisor Ann gives her verdict.

See Salt to the Sea in our catalogue

Salt to the Sea tells the stories of a group of refugees, both young and old, fleeing during the Second World War. It is based on the true story of the evacuation of huge numbers of people on board a cruise ship called the Wilhelm Gustloff.

The author creates four main characters, each of whom tells the story from their personal perspective. As each chapter unfolds with a different narrator, the reader is able to get a broad, historical sense of how different religions, races and sexes were impacted by the horrors perpetrated during wartime. The reader is soon drawn into the desperate plight of youngsters who are running for their lives, hoping that they will be fortunate enough to get on board a rescue ship that will take them to a new, safe existence.

On the way, new characters are introduced – some remain, some leave – but all add to the richness of the story. In particular, the young seaman who is already on board the Wilhelm Gustloff is clearly deeply flawed and his story is told via letters to a young, female neighbour whom he believes is in love with him. It soon becomes clear that this belief is unfounded. He is just creepy.

Finally, after many exciting incidents and encounters, the main refugees reach the ship which is being slowly loaded. Even getting on board is fraught with problems because of lack of paperwork, inability to speak the language and the sheer number of people who are trying to board. However, finally the ship is loaded with far more people than it is equipped to carry, 9000 instead of the 1500 it would have carried when it was cruising.

Furthermore, the boat has stood idle for four years and its seaworthiness is questionable. The reader learns this through the ramblings of the seaman who slowly comes to realise that what is meant to be the salvation of so many people could end badly. Shortly after the boat finally leaves harbour, there is an explosion and it begins to sink. The description of the panic and horror experienced by those trying to escape is very graphic and the reader is drawn into the maelstrom created by the scramble for the lifeboats.

Sepetys does not pull any punches with this novel. She is keen to show how people will do things they would never consider appropriate if their lives were not at risk. Morality, kindness and generosity can all potentially be lost in circumstances where loved ones are in danger or one is pushed to the limit. This is not a comfortable read but it is very compelling and the fact that it is based on a true story gives it an extra piquancy. I would recommend it to anyone who enjoys a strong story effectively told.

Other titles by Ruta Sepetys

Out of the Easy

“Josie Moraine wants out of The Big Easy - she needs more than New Orleans can offer. Known locally as a brothel prostitute’s daughter, she dreams of life at an elite college, far away from here. But then a mysterious death at in the Quarter leaves Josie caught between her ambition and a clandestine underworld. New Orleans is luring Josie deeper in as she searches for the truth and temptation beckons at every turn.”

Between Shades of Grey

“One night 15-year-old Lina, her mother and young brother are hauled from their home by Soviet guards, thrown into cattle cars and sent away. They are being deported to Siberia. An unimaginable and harrowing journey has begun. Lina doesn’t know if she’ll ever see her father or her friends again. But she refuses to give up hope.”