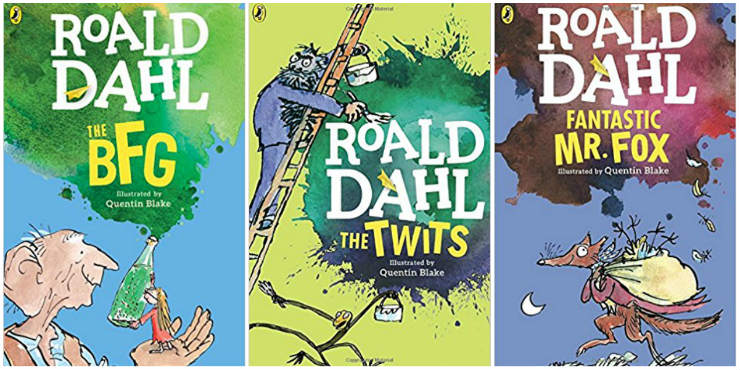 It’s Roald Dahl Day. To celebrate, we’ve put together a list of the top ten most-issued Roald Dahl books in our libraries.

“Giants are known for eating children. So when Sophie is snatched from her bed by the BFG, she fears for her life. But luckily he is far more jumbly than his disgusting neighbours. They become good friends and cook up a plan to rid the world of bad giants.”

The hero in this story, Sophie, is named after Dahl’s granddaughter (now an author in her own right). According to Michael Rosen in his brilliant book Fantastic Mr Dahl, Roald told his young granddaughter the tale of a big friendly giant who collects dreams and then, when she had gone to bed, he climbed up a ladder to appear at her bedroom window - just like the BFG!

The film version of The BFG came out last year.

“Mr and Mrs Twit are extremely nasty. So the Muggle-Wump monkeys and the Roly-Poly bird hatch a plan to give them just the ghastly surprise they deserve!”

Mr Twit has a disgusting beard in which all sorts of food and rubbish is lodged. Roald Dahl famously hated beards and never grew one himself.

“Boggis, Bunce and Bean are just about the nastiest three farmers you could ever wish to meet. They hate Mr Fox and are determined to get him, and plan to catch him by whatever means necessary.”

You can also reserve the stop-motion film version of Fantastic Mr Fox](https://suffolk.spydus.co.uk/cgi-bin/spydus.exe/ENQ/OPAC/BIBENQ?BRN=914251), directed by Wes Anderson.

4. Charlie and the Chocolate Factory

“Charlie Bucket can’t believe his luck when he finds a Golden Ticket and wins the chance of a lifetime: a magical day witnessing the miraculous creation of the most delectable eatables ever made.”

Dahl’s most famous book. He loved chocolate even more than he hated beards. As a boy he went to school very near to the Cadbury’s Factory, where the pupils were sometimes given new chocolate inventions to try out.

“Matilda’s parents have called her some terrible things. The truth is, she’s a genius and they’re the stupid ones. Find out how she gets the better of them and her spiteful headmistress, as well as discovering that she has a very special power.”

Matilda: The Musical hit the West End seven years ago to great acclaim and this autumn, Tim Minchin, who wrote the music for the show, releases his fist picture book with Steve Antony. Inspired by one of the songs, When I Grow Up is a humorous and moving look at adult life from a child’s perspective.

“The Enormous Crocodile is a horrid greedy grumptious brute who loves to guzzle up little boys and girls. But the other animals have had enough of his cunning tricks, so they scheme to get the better of this foul fiend, once and for all!”

“Every Saturday morning the Greg family goes off to shoot animals and birds. But the girl who lives next door hates hunting. Now it’s made her so angry she’s put the magic finger on them all - and very strange things have begun to happen.”

8. James and the Giant Peach

“The story of James who has lived with his two beastly aunts ever since his parents were eaten up outside London Zoo. Aunt Sponge and Aunt Spiker are really horrible people and make poor James’s life a misery.”

Dahl’s first novel written specifically for children, although he did write a short story called The Gremlins over a decade earlier which was originally published as a short magazine story then, marketed for children, as a book by Walt Disney.

“This is a funny story which tells the tale of George and his Grandma. When he can’t stand her bad habits any longer, he decides to cure her nastiness for good. He concocts a very special medicine which is as nasty as she is - with explosive results.”

George’s horrible grandma is s a ‘grunion’ which, apart from being type of marine fish, sounds like a cross between a grump and an onion. A fantastic word which completely sums up Grandma. Roald Dahl’s invented vocabulary is legendary. You can look up many more of his words and their meaning in the Oxford Roald Dahl Dictionary.

10. Charlie and the Great Glass Elevator

“Mr Wonka might be a genius with chocolate, but Charlie and his family don’t trust his flying skills one bit. Especially when the thing he’s flying is a glass elevator and it is zooming out of control into the stratosphere.”