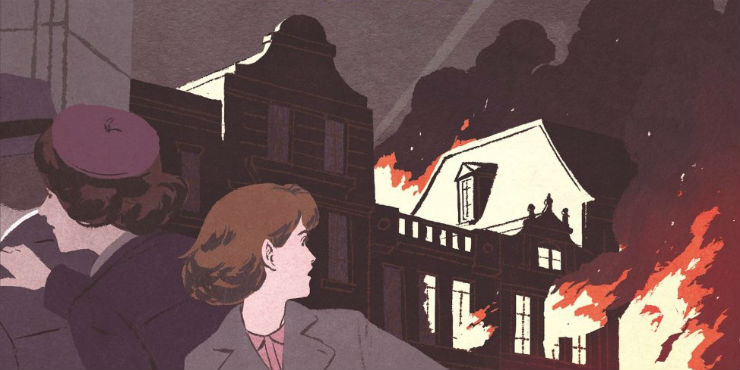 The Apple Spy by Terry Deary

One of Deary’s World War II tales. If you’re more interested in World War One, you may like The Pigeon Spy.

An interesting well-written story, based on the author’s own life, about a mother and daughter who were sent away from the UK to live in Canada during WWII. It’s a fascinating read.

Carrie and her brother Nick are billeted with a bible thumping bully when they were evacuated to Wales in WWII. This classic has been in print since 1973, and was made into a film too since it’s such a brilliant read.

A moving semi-autobiographical story by German born Judith Kerr, documenting her family’s flight from Germany before WWII, is the first part of her trilogy Out of the Hitler Time. Part 2 is Bombs on Aunt Dainty and part 3 is A small person far away.

The tin snail by Cameron McAllister

Just aching to be made into a film, this exciting book opens in 1930s Paris before evacuating to “La France profonde”, where work on a revolutionary car design can continue not quite under the noses of the Germans. It’s an adventure with colourful central characters, a moving story of courage and inventiveness, a warm portrayal of a father and son relationship, a gripping tale of invention and engineering and another way to look at life during WWII.

If you haven’t read this yet, and it’s heart-achingly brilliant so you won’t want to miss it. We also have the TV special of Goodnight Mister Tom, starring John Thaw not as Inspector Morse.

An eagle in the snow by Michael Morpurgo

Michael Morpurgo sets many of his books in wartime — his newest war story, is set in the 1940s. Stranded after their house in bombed, a stranger tells Barney and his mother a story about a World War One soldier.

Listen to the moon by Michael Morpurgo

This well-balanced story set on the Scillies during WWI was shortlisted for a Costa Book Award in 2014. It features a fishing family who find a girl with no memory, washed up on a rocky shore.

Billy’s father has gone off to war, and his mother doesn’t want her children to be evacuated from London. During a bombing raid, the tube station they sheltered in and much of their neighbourhood suffers a direct hit and their mum remains unaccounted for. Billy and his little sister fall into the hands of the evacuation officer, and their subsequent adventures take the reader on an emotional roller coaster ride. It’s a superb book, and an atmospheric portrayal of London life during the blitz.

Set in East Anglia during World War Two, a group of evacuees investigate a murder.

The best Christmas present in the world by Michael Morpurgo

A World War One soldier’s experience is brought to life with a letter. Illustrated by Michael Foreman, author of War boy.

Michael Foreman grew up in Pakefield during WWII. One of his earliest memories is of the night the village was bombed, and the consequences of those bombs and that war coloured the following years. This gem of a book is his personal record of a wartime boyhood in Suffolk. His beautiful water colour illustrations glow through the book.

The boy at the top of the mountain by John Boyne

A powerful and disturbing book about a boy who, after he was orphaned, came to join his aunt in Hitler’s mountain top hideaway. This book deals with anti-Semitism, bullying and fear.

Amsterdam, 1945 and 15 year old Tygo is working as a locksmith for a German officer, helping him to loot empty houses and hoping to rescue his sister from the Nazis. He lives in fear of his life from both the Germans and the Dutch Resistance. It’s a gripping page turner, as was his previous novel Hitler’s angels. Brilliant.

The big lie by Julie Mayhew

Set in an imagined UK dystopia where Nazis won the war and are in power.

The earth is singing by Vanessa Curtis

The escape by Robert Muchamore