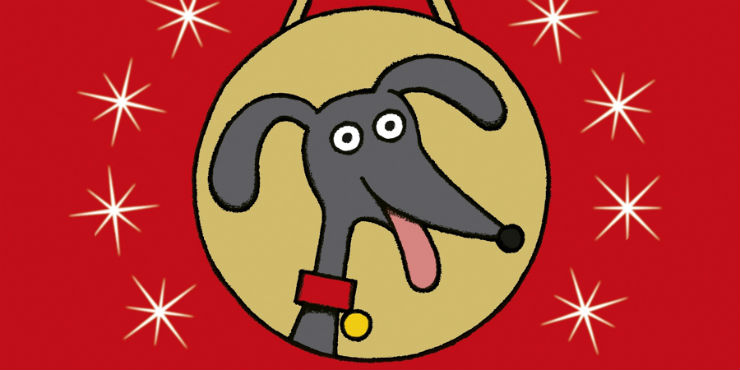 The dad in this lovely rhyming picture book has feet of clay. He cooks delicious messy breakfasts whilst still half asleep, snores too loud, and cracks corny jokes. A real superhero, warmly portrayed.

Thank goodness this perfect summery picture book has been reissued, complete with 4 million wasps, just in time for the Record Breakers-themed Summer Reading Challenge. First published in 1972, I suppose the people do look a little dated now, but the story is still funny and tale of working together to defeat a common enemy is still satisfying. (I wonder if the pictures inspired the TV advert for Yorkshire Tea, set amongst fields and hills? The one where the vapour trails from aeroplanes form the steam coming from giant cups of tea?)

Got a boy racer? He’ll love this story, and girl racers should enjoy it too. Told at breakneck speed in bouncy rhyme, as creatures race against each other in extraordinary vehicles. It’s the very first title in the new Fast and Furry racers series.

If your children hate broccoli, don’t let them read this book, otherwise they’ll want their own Superkid too.

A race; a fable; an awful end for poor old frog; an answer to that age old question “Why do snails have shells?” As funny now as when first produced 10 years ago, but not to be read before sports day!

My brother is a superhero by David Solomons

Subtitled “I could have been one too, but I needed a wee”, this comic novel is flying off our shelves so fast, I’ve only had time to read the first few pages. Shame! So now we’ve ordered lots more copies. Phew! It’s by screenwriter David Solomons and it’s funny, filmic, and fabulous for a summer read. And it comes with a link to a free app too!

“Stuck in an isolation ward in a hospital far from home with another remarkably green boy, there is one unavoidable conclusion; they’re superheroes sent to save the world. They just need to get past hospital security and discover what their superpowers are…”

The 26-storey treehouse by Andy Griffiths

This crazy treehouse features an anti-gravity chamber, an ice-cream parlour, a mud-fighting arena and more, all on 26 storeys. Packed with comic drawing this would be a great follow on for fans of Philip Ardagh. And it they do enjoy it, they may like to know that it used to be a 13-Storey Treehouse, that at the end of July, it will be a brand new 39-Storey Treehouse (which we have on our shelves soon) and that after Christmas, just when the new year starts to get dull, it will become a 52-Storey Treehouse. Now that really would be a record breaking treehouse. I bet it won’t get higher than that.

The hundred-mile-an-hour dog goes for gold! by Jeremy Strong

The dog is called Streaker and “mum says a carrot is more obedient”. Guess what happens when he’s entered for the animal games! We’ve got shelf loads of books about this fast running canine character and each is laugh-out-loud funny.

Supercat vs the pesky pirate by Jeanne Willis & Jim Field

Tiger was James’ dear little pet cat until he licked a toxic sock and transformed into Supercat. With lots of space between the lines, it’s easy to follow his daring deeds as he fights arch nemesis Count Backwards. We have other titles in this series too, Supercat vs the chip thief and Supercat vs the party pooper.