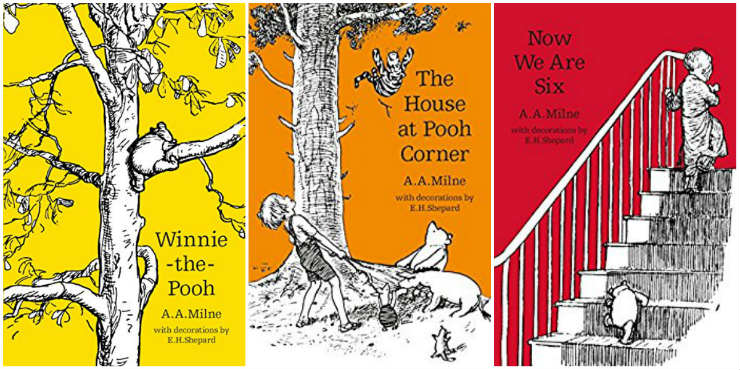 “This work includes poems for children which feature Pooh helping Christopher Robin with his schoolwork (if helping is the word). It is an evocation of childhood, through the eyes of the six-year-old Robin.

“Featuring E. H. Shepard’s original illustrations, Now We Are Six is a heartwarming and funny introduction to children’s poetry, offering the same sense of humour, imagination and whimsy that we’ve come to expect from his favourite books about Winnie-the-Pooh, that Bear of Very Little Brain.”

“‘Once upon a time, a very long time ago now, about last Friday, Winnie-the-Pooh lived in a forest all by himself under the name of Sanders.’

“Winnie-the-Pooh may be a bear of very little brain, but thanks to his friends Piglet, Eeyore and, of course, Christopher Robin, he’s never far from an adventure. In this story Pooh gets into a tight place, nearly catches a Woozle and heads off on an ‘expotition’ to the North Pole with the other animals.”

“‘One day when Pooh Bear had nothing else to do, he thought he would do something, so he went round to Piglet’s house to see what Piglet was doing.’

“This is the second classic children’s story by A.A. Milne about Winnie-the-Pooh and his friends in the Hundred Acre Wood. In this volume Pooh meets the irrepressible Tigger for the first time, learns to play Poohsticks and sets a trap for a Heffalump.”

The Christopher Robin Collection: tales of a boy and his bear, by A. A. Milne & E. H. Shepard

“Christopher Robin received a toy bear for his first birthday which he later named Winnie-the-Pooh. Together, Christopher Robin and Pooh formed one of the greatest friendships of children’s literature; embarking on extraordinary adventures with their friends in the Hundred Acre Wood.

“This edition showcases their most exciting encounters and treasured moments, from A.A. Milne’s original books, accompanied by E.H. Shepard’s decorations.”

The Best Bear in All the World: in which we join Winnie the Pooh for a year of adventures in the Hundred Acre Wood, by various

“Celebrate 90 years of Winnie-the-Pooh with The Best Bear in all the World, the official sequel to the classic children’s stories by A.A. Milne.

“With brand-new stories from some of the most beloved children’s authors writing today - Paul Bright, Brian Sibley, Kate Saunders, and Jeanne Willis - each will transport you back into the Hundred Acre Wood for more adventures with Winnie-the-Pooh, Christopher Robin, Piglet, Tigger, Eeyore, and the rest of the gang.”

Return to the Hundred Acre Wood: in which Winnie the Pooh enjoys further adventures with Christopher Robin and his friends, by David Benedictus & Mark Burgess

“Over 80 years since Winnie-the-Pooh first delighted readers, David Benedictis takes us back to the Hundred Acre Wood for more adventures.”

Other bears of note

The first Rabbit & Bear book. Author Julian Gough said he wanted to ‘combine the charm and humour and complicated, funny, interesting characters of Winnie the Pooh with the weird, different-kind-of-interesting, real-life facts of David Attenborough’s wildlife documentaries.’ And the result is hilarious, warm and perfect for sharing.

A beautiful, noisy book about animal sounds, this is a companion to Brown Bear, Brown Bear, What Do You See?.

Hugless Douglas and the Great Cake Bake, by David Melling

The loveable Brown bear who was in need of a hug, is encouraged to try new things to eat- in this story it’s anything which isn’t honey.

I Want My Hat Back, by Jon Klassen

The first in a brilliant trilogy by an award-winning Canadian author-illustrator:

“The bear’s hat is gone and he wants it back. Patiently and politely he asks the animals he comes across whether they have seen it. Each animal says no, some more elaborately than others. But just as he begins to lose hope a deer comes by and asks a question that suddenly sparks the bear’s memory.”

“Panda has a tray of doughnuts. Animal after animal tells him the one they want, but it’s only when Lemur says ‘please’ politely that Panda will give any out! A witty and stylish lesson that manners will get you everything. Even a trayload of doughnuts.”

The first lesson in good manners from the loveable grump.

“Bears are clumsy. They don’t sit still. They’re much, much bigger than teachers - and they eat SUCH a lot of lunch! Yes, taking a bear to school is a BAD idea. But will this little boy find the courage to face the first day of school alone? With so much to do, like painting, dressing up, storytime, and making new friends, he just might! And Bear? He’ll always be waiting at the end of the day, with a great big hug!”

A funny and heart-warming tale, especially good for reading with children who are worried about starting school or nursey.

The Ice Bear, by Jackie Morris

“When the great bear wakes in her ice den to find that one of her two cubs has been taken, she holds the second child close, but she never forgets her lost child. When a childless couple are given their heart’s desire, they too hold their new-found child close. But is Raven a force for evil of a force for good?”

““A bear on Paddington Station?” said Mrs Brown in amazement. “Don’t be silly – there can’t be.”

“The Browns first met Paddington on a railway station – Paddington station, in fact. He had travelled all the way from Darkest Peru with only a jar of marmalade, a suitcase and his hat.

“The Browns soon find that Paddington is a very unusual bear. Ordinary things – like having a bath, travelling underground or going to the seaside become quite extraordinary, if a bear called Paddington is involved.”