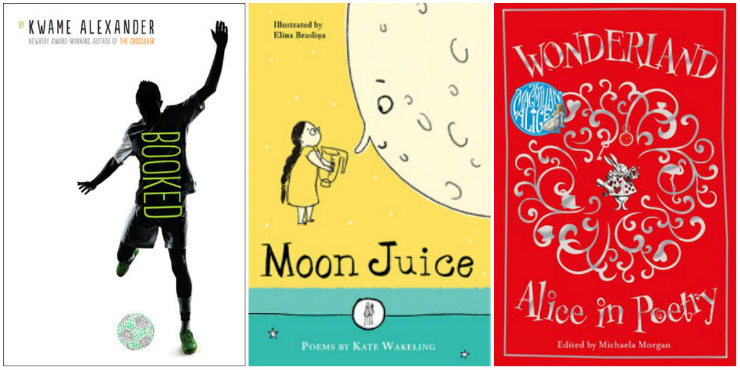 Moon Juice, by Kate Wakeling, has just won the 2017 CLiPPA (Centre for Literacy in Primary Poetry Award). The award was launched in 2003 and is the only one for published poetry for children.

“Kate Wakeling’s first book of poems for children is full of curious characters and strange situations. The poems she writes are always musical, sometimes wistful, and full of wonder at the weirdness of the world.”

“Nobody can stop Nick Hall - he’s a star on the football team, and life is about to get a whole lot sweeter when he asks out the girl of his dreams. But then a bombshell announcement shatters his world. Nick will need all his courage, both on and off the pitch.”

“Colours, animals, space, music, fairytale fireworks! Here is a collection of poems especially written for performance. Perfect for the classroom and also for reading aloud at home.”

An anthology celebrating the spirit of Wonderland. A celebration of the poems of Lewis Carroll, including popular favourites such as Jabberwocky, The Walrus and the Carpenter and Tweedledum and Tweedledee, plus work from contemporary poets including Roger McGough, John Agard, Tony Mitton and Vivian French, each putting their own spin on these classic texts.

“Packed with silly rhymes, witty wordplay and thought-provoking story poems, this collection of poems will delight children of all ages.”