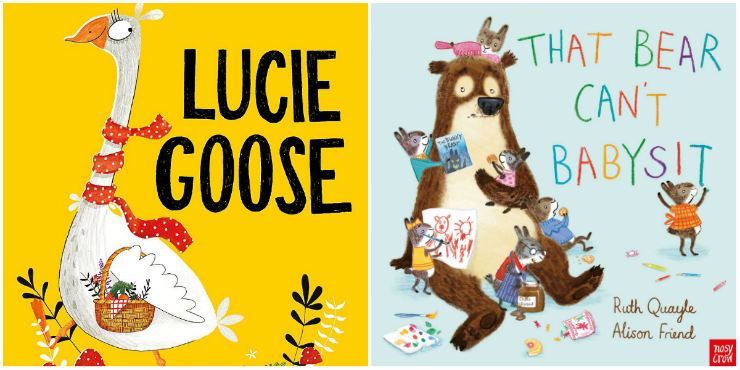 Oscar’s Book Prize celebrates the best books for under-fives of the year. It is awarded in memory of Oscar Ashton and in partnership with Amazon, the Evening Standard and the National Literacy Trust. The winner will be announced on 14 May, with the author receiving a £5,000 reward.

“Lucie Goose lives all alone in a house at the edge of the woods. She has never met or spoken to another animal of any sort until a wolf, bear, and lion turn up on her doorstep and go Rraaaarrrrrr!

“She should start screaming. She should run away. But Lucie Goose isn’t very good at being scared. What will she do?”

There’s a Pig Up My Nose, by John Dougherty & Laura Hughes

“What if a PIG got stuck up your NOSE ? How ever would you get it out?

“When Natalie has to go to school with a pig stuck up her nose, her whole class gets together to find a way to get the pig out. But how will they do it?”

““Erin loves to lie on the jetty, looking for the weirdest fish in the sea - the weirder, the better! And she knows the best ones must be further out, where her mum won’t let her go. Out there in the deepest sea lies the Black Rock: a huge, dark and spiky mass that is said to destroy any boats that come near it! Can Erin uncover the truth behind this mysterious legend?””

“Penguin Blue and his friends are back in a swashbuckling adventure that sees them sail the seven seas in search for treasure, but end up back home with something worth much more than gold.

“When Mr and Mrs Burrow hire a babysitter, they are not expecting Bear. And Bear is NOT expecting seven little bunnies who are full of mischief. Together, the bunnies persuade Bear to read a scary book, give them sweets and chocolate spread for dinner, and go crazy with the garden hose!

“But when the bunnies find Bear sailing the high seas in a make-believe ship, suddenly he isn’t such a bad babysitter after all. When Mr and Mrs Burrow return, all the bunnies are peacefully tucked up in bed. Well, almost all of them.”